Too early! I regularly push the spring season, and I enjoy the machismo of having the first tomatoes in town. 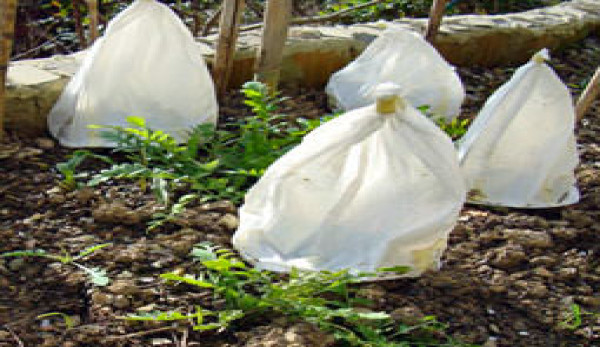 I regularly push the spring season, and I enjoy the machismo of having the first tomatoes in town.

I transplanted some dinky tomatoes and some Tromba di Albenga squash seedlings into the garden a week ago, and as the photo shows, it was still a bit too cold.¬Ý

I made little plastic hotcaps to cover the plants, but instead of staying above 10 degrees (Celsius,¬Ý 10C =50F) it dipped to almost 7 degrees a few nights.¬Ý

The tiny little tomatoes all died and the vigorous squash seedlings were stunted.

I still have hopes that a new heat spell will push the squash seedlings back onto the fast track, but there‚Äôs a good chance that won‚Äôt happen. Once stunted, plants seldom recover.¬Ý

I‚Äôve already started a new batch of seedlings in the fluorescent light growth chamber I use to start seeds in spring.

Last weekend I visited some vegetable gardens along the river in the nearby town of Chiavari, and one farmer there enjoyed showing me his three different seedings of fava beans.

The first seeding suffered from the excessive rains, the second seeding was doing very nicely, and the third seeding was just emerging from the soil.¬Ý

The farmer explained to me that he triple seeds every year, because with the vagaries of winter weather, he can never be sure if an early seeding or a late seeding will end up being most productive.

Early beans bring a higher price, late seeded beans are more reliable, but have smaller crops.¬ÝMid-season seedings suffer if January is cold, but thrive and produce the best of all if January is nice.¬Ý So every year is a gamble, and this farmer hedges his bets by seeding multiple times every year.

Even though I do not sell the vegetables that I grow, I am very anxious about their success.

Last year I had my cherry tomatoes planted in mid-February, the weather was nice and the plants jumped up to six feet tall by the end of April, when the rains came, along with the fungus, and I watched all the plants, full of unripe fruit, turn brown in the space of three days, the victim of a vicious fungal attack.

I replanted immediately, and ended up harvesting a later, but very respectable amount of fruit nonetheless.¬Ý

This year I‚Äôm not planting so early, because it was icy cold in late February.¬Ý At this point, I‚Äôm opting for a slightly late but safe tomato crop, and crossing my fingers that it doesn‚Äôt pour in May again this year.¬Ý But if it does, I‚Äôll just replant.