A chicken keeper finds her love and her place in a Wild West Show. 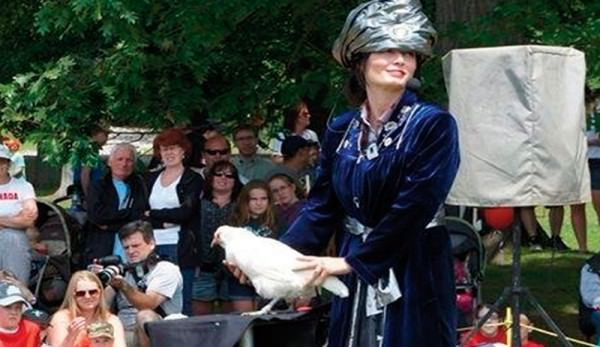 The cast of characters among the flock can be diverse. Some make us laugh, others are curious and creative, exhibit superior intellect, or inform us about their kind. Itâ€™s similar with the keepers themselves, and Angie Bishop is one of a kind.

A homemade chicken coop may not sound romantic, but for Angie, a coop helped her win true love. To woo her, her future husband, Tom Bishop Jr., built one on his property in rural Ontario, Canada.

â€śHe wasnâ€™t into chickens,â€ť Angie says. â€śBut he asked me if Iâ€™d come by more often if he had a place for mine.â€ť

How could she resist?

Angie hasnâ€™t always been a chicken enthusiast. â€śI just wanted a couple of eggs,â€ť she says.
â€śI found out Ameraucanas laid blue ones, and I got a kick out of that.â€ť

Single at the time, she purchased eight fluffy chicks and kept them inside the house in a pet carrier warmed by a heat lamp. A few of those grew into stately roosters, and along with the hens, they formed a happy flock that scratched around outdoors and roosted in the trees.

She soon learned that Silkies have feathers that are more like fur and got a few of those. From there, she was hooked, checking out different breeds and marveling at each bird with its unique personality.

At her wedding, an unexpected guest spoke up. At that moment when objections were called for, a red hen named Reba (after country singer Reba McEntire) sounded off. â€śSheâ€™d laid an egg,â€ť Angie says, â€śand she wanted everybody to know.â€ť In chilly November, laying an egg was unusual. Angie and her now-husband took Rebaâ€™s cackling as a sort of good omen and made her part of the family show.

All In The Family

For more than 100 years, the Bishop family has been involved in Wild West performances.
Tom Bishop Jr. is part of the third generation to run the Tom Bishop Wild West Show, the oldest family-run show of its kind in the world.

In the Wild West Show, Angie has become known as The Fowl Hypnotist. She makes children laugh with her short act thatâ€™s used to fill in time while others are getting ready for the next presentation. Dressed in sparkly velvet and with a shiny silver cap, she â€śhypnotizesâ€ť a hen that has come to her for laying problems. At the end of the act, an egg is laid â€¦ and itâ€™s chocolate! Angie tosses the egg into the audience, and kids scramble like hungry hens after food. Somebody goes home with the prize or devours it on the spot.

The Bishop family also trains animals that appear in Canadian movies and on television, and Angie has added chickens to their list of esteemed actors. Without the fuss of stage makeup but given a few extra treats, Angieâ€™s show flock was recently on set for a remake of the classic Anne of Green Gables. With names such as Reba and Kenny Rogers, chosen for their celebrity looks, the birds seemed right at home.

Angie says that her chickens arenâ€™t just birdbrains. She believes her work as The Fowl Hypnotist gets people interested in chickensâ€™ intellect.

â€śPeople can look up clicker-training or how to hypnotize chickens on YouTube, and learn a lot,â€ť she says. Her final words reveal her heart: â€śChickens never let me down.â€ť

This article originally appeared in the September/October 2016Â Chickens.