Though bedding material used in chicken coops may vary by geography and availability, the purpose of providing bedding remains the same: to manage waste and to provide a soft place for chickens to lay eggs. 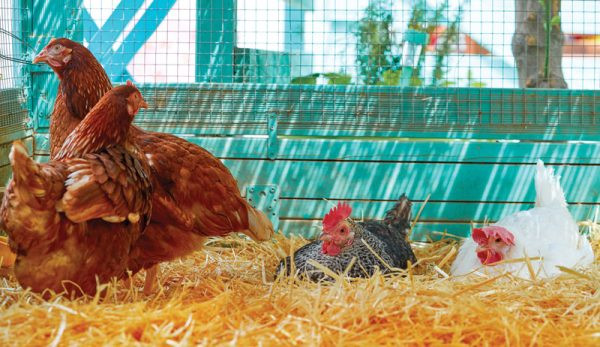 A¬Ýmultitude of bedding options that can be used in chicken coops exist. Some are readily available and common, while others may take a bit more searching to locate.

No matter which type of chicken bedding you choose, it‚Äôs important that it:

‚ÄúLitter‚Äù and ‚Äúbedding‚Äù are terms often used interchangeably. Though to get technical, litter is what is spread on the floor of a coop and bedding is what‚Äôs used in nest boxes‚Äîwhere chickens bed down for the night if not roosting. These materials need not be the same, though many chicken owners use the same product in both areas to minimize work.¬Ý

Chickens‚Äô excrement is unique. Though they don‚Äôt urinate, the feces they pass is still watery and, if not managed properly, smelly! Additionally, chickens are notorious for playing in water dishes and containers. The water that‚Äôs flung around the coop must be absorbed to keep pathogens at bay.¬Ý

Here are the most common choices backyard chicken-keepers use as bedding that absorbs moisture and keeps chickens comfy.¬Ý

By far the most-common bedding in the United States, pine wood shavings are sold in farm- and feed-supply stores across the country. Available in bigger cubes as livestock bedding (that cover 8 cubic feet) or small-animal bedding (that covers 4 1‚ÅÑ2 cubic feet), this bedding is common for a multitude of reasons.

Shavings specifically for chickens will often say the product has been heat-treated to prevent salmonella, E. coli and mold spores. This type of bedding also inhibits bacterial growth, even when wet. And the light color is especially welcome during cold, dark winter months.

There is some controversy regarding using cedar shavings in coops because of the use of plicatic acid. This can break down airway and lung cells, causing respiratory distress and asthma.¬Ý

Leah Alessandroni beds her seven chickens on fine-flake pine shavings. After much research, Alessandroni decided on this bedding as the product was readily available. Also, she utilizes the deep-litter composting method.

Sawdust, finer than wood shavings, is easy to come by but not always the best choice for chicken coops. Notoriously dusty, it‚Äôs also imperative that chicken owners know exactly what type of wood produced the sawdust to prevent accidental poisoning of poultry.

The main con to sawdust is a big one. Dust that occurs when the chickens play and scratch can cause birds to cough, wheeze and spit. It can also lead to respiratory issues.

If sawdust is used in a small area where birds don‚Äôt have much room to move around, it might be fine. But avoid sawdust in areas where there is much feather-fluffing and scratching. If there is an option to have sawdust ground slightly larger or to use sawdust pellets, you can avoid the dustiness.¬Ý

Read more: Help! I think I might be allergic to my chickens!

Straw is made from the tough, yellow stalks of cereal grasses such as barley, oats, rye and wheat after harvest of the grain and chaff. An agricultural byproduct, there are many uses for straw, including as bedding (for people and animals) and construction material (mainly as insulation and roofs).

Straw differs from hay, which is softer and more nutritious. Hay is primarily used as a forage for livestock.

Laurie Mays, owner of Branded Stock Farm in Paris, Kentucky, purchases straw strictly for her chickens‚Äô nesting boxes, which they are in only at night (during the day the chickens free-range in a poultry-fenced area). Though straw keeps the eggs of her two Americanas’ lay clean, it needs to be changed more frequently than she‚Äôs used to. It is convenient and cheap, though, she notes.¬Ý

Jacquie Jacob, poultry extension project manager for the University of Kentucky, notes that dry, chopped straw of any kind can be a great source of litter for chicken coops. Flax and straw can also work. Regular straw, however, is not very good, she says.

Sand used as litter in a coop seems to divide chicken owners unlike any other bedding choice. Owners are often firmly entrenched in either the love-it or hate-it camp.

If using sand as bedding, it‚Äôs important to choose the correct type. You also have to ensure the sand is dry when installing in the coop. Play sand should be avoided as bedding, as it retains moisture.

Medium- to coarse-grained sand drains well and are great choices in chicken coops.¬Ý

If purchasing sand from a gravel company, you may have to make an in-person trip to see the different types of sand they have available, as there aren‚Äôt any accepted, industry-wide sand monikers.

The best type of sand is river, construction or bank sand. These contain multiples particle sizes, including small pebbles.¬Ý

As little as 1‚ÅÑ4-inch of sand on the coop floor may be sufficient for comfort and cleanliness. But it‚Äôs important to note that predators can burrow into the coop through sand floors if no other materials are used.

Additionally, sand can freeze in the winter, losing all of its cushioning abilities.

The use of hemp in many ag and industrial settings is on the rise around the world. Its use by poultry enthusiasts is no exception. Made from the center portion of a hemp plant, it‚Äôs all-natural and a safe bedding option for show and pleasure birds.

Some flock owners who have used hemp note that it can contain some long fibers that can get tangled on chick‚Äôs feet. ¬Ý

Read more: Ready to build a coop? Check out these chicken coop basics.

Cardboard bedding is comprised of thick pieces that have been shredded into large chunks. Once installed in a coop, the cardboard should be stirred each day. This allows the manure to sit on top of the bedding and dry out.

The bedding should never get wet and heavy.¬Ý

We should note that the type of cardboard used for chickens should be clean, recycled cardboard. Colored cardboard can include chemicals that can harm your chickens.¬Ý

Many chicken owners have access to newspaper and computer paper. Using these products in a coop can minimize their entry into the waste stream. Shred all paper placing in the coop.¬Ý

Also, though many papers now use soy-based ink, some still use inks that contain petroleum or heavy metals. These can be unhealthy for chickens (and humans).¬Ý

Depending on the region of the country in which a chicken-keeper resides, there may be other readily available coop bedding options not mentioned in this article. Pine needles, rice hulls or dried leaves come to mind.

In some states, peanut hulls are also used as bedding for chickens, though aflatoxin can be an issue, notes Jacob.

The average hen produces 1 cubic foot of manure every six months. Multiply that by the number of hens in a flock, and that‚Äôs a lot of manure!

Composting chicken manure is a wonderful way for chickens to provide even more than eggs. They can increase garden yields, as well.¬Ý

Applying organic matter to soil increases its ability to hold water, as well as improves drainage and reduces erosion. Compost also acts as a food source for soil microbes, which accelerates the breakdown of nutrients into more-available forms.¬Ý

Though chicken manure can be spread directly on fields, it‚Äôs more useful when its composted, says Jacquie Jacob, poultry extension project manager for the University of Kentucky.

Raw manure should not be used on vegetable crops because of food safety issues.

Poultry litter is high in nitrogen (as well as phosphorous and potassium), so it has the potential to burn plants. Chicken manure should be composted for a minimum of five to six weeks to allow time for it to ‚Äúcool.‚Äù This time also allows disease-causing pathogens to be destroyed.¬Ý

Everything removed from a chicken coop can be composted. This includes manure, undigested food, bedding materials and feathers.

The ratio of chicken manure and bedding to other stuff should be:¬Ý

Gather the materials in a compost bin and wet them thoroughly. This will begin the process of raising the internal temperature of the pile. The pile should reach a temperature of between 140 and 160 degrees F for several weeks to reduce the risk of soil-borne pathogens.

The pile should be turned every few weeks to ensure all the manure is composted and to allow oxygen to penetrate the pile and reduce its smell.

Aging chicken manure is also an option. It takes between six and nine months for chicken manure to break down properly using this method, which follows the same ratio mentioned above.

Once the manure pile is made, it‚Äôs left alone to break down. Without the use of heat, the longer compost is aged, the more the population of disease-causing bacteria will decline.¬Ý

This article originally appeared in the March/April 2022 issue of¬ÝChickens¬Ýmagazine.