The History and Health of Holly

At this time of year, we sing of holly and decorate with it in our homes. It is firmly tied in our minds to Christmas, but have you ever wondered why? 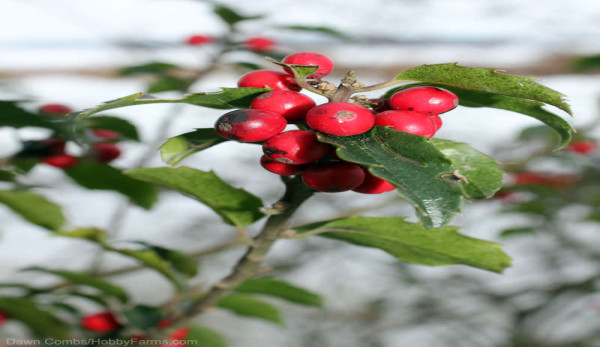 At this time of year, we sing of holly andÂ decorate with it in our homes. It is firmly tied in our minds to Christmas, but have you ever wondered why?

The genus that we call “hollyâ€ť is actually well over 50 million years old. There are most likely some forms of holly that died out before we started a record of the ancestors that would give us the plants we know today. There are 400 to 600 species in the Ilex (holly) genus. They are mainly temperate and subtropical, but there are specimens almost everywhere in the world. They have similar berries everywhere they grow, though they come in a variety of colors. Most well known is hollyâ€™s evergreen glossy foliage.

Holly shrubs, vines or small trees are dioecious, meaning they carry male and female flowers separately. This makes an individual plant either entirely female or entirely male. Perhaps it is this “separate houseâ€ť feature of the plant that lends to some of its folklore regarding its use as a decoration in the home. Depending on when the leaves are gathered and whether theyâ€™re sharp or smooth is said to speak for whether the man or the woman will rule in the household for the year.Â

Because holly plants so widely range across our planetâ€”and because they are so oldâ€”there are stories about them in almost every culture.

Ilex aquifolium
The holly species most often depicted in association with Christianity and Christmas is Ilex aquifolium. Its red berries and evergreen foliage are synonymous with holiday cheer. Originally, the holly was sacred to the Roman god Saturn, and as the Christian population increased in areas where he was celebrated around the winter solstice, Christians also decorated with holly to protect themselves from persecution. Inevitably, as their numbers grew, Christmas eclipsed the Saturnalia celebration. Holly remained, but its symbolism changed.

In England, a sprig of holly was used to decorate bee hives. This was done because it was believed that theÂ bees hummed for the Christ child at the first Christmas.

“At the birth of Christ on Christmas
eve, the bees are said to stir in
their hives and hum a great song of
praise, but one must not disturb
them, for, as they are careful not to
intrude upon the celebrations of
mankind, so man must not interfere
with their celebration of the
birth of the Christ child”
â€”Encyclopedia of Superstitions, Folklore, and the Occult Sciences of the World (1903)

Ilex paraguariensis
Yerba mate, or Ilex paraguariensis, is the holly most well known in South America. Itâ€™s perhaps best known for the concentration of theobromine (similar to caffeine) that is found in the Ilex genus. Yerba mate is a well-known tonic and stimulant in the areas where it grows.

I hope this post finds you and yours basking in the glow of Christmas morning. May the love of your family and friends (and piles of discarded wrapping paper) be all around you. Merry Christmas!

Â« More of the Prescription GardenerÂ»