The Hive Mind, Or How I Bonded With Bees

Many beekeepers believe hives can develop personalities, and mine are about as mellow as they get. 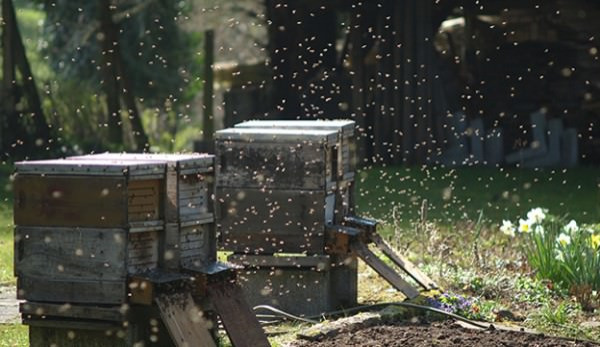 I kinda thought I was crazy, because I was starting to get the idea that my beehives liked me. Yeah, I know, right? And note the distinction: The hives, not the individual bees.

Before hives lived at my house, there were always a lot of honeybees in and around The Fortress Garden. Around several of the raised beds, I have big clumps of oregano, and when that stuff is blooming, the bees go batty for it, with dozens and dozens of them climbing around on the little white flowers. I have to lean over and reach through this potential sting-fest in order to care for the beds. Number of times stung: zippo. I am firmly convinced it is because I never swat at them or try to shoo them away so I can get in to weed the zucchini. I just greet them, apologize for the disruption, and reach right on through.

When Steve the Beek installed two hives over the summer, I was a bit intimidated. Their proximity to our deck and hot tub was, well, proximate. As in only about 20 or 30 feet. When youâ€™re talking about a box full of stingy things, that is really, really close.

The first few times I had to get near the hives to plant more bee-friendly flowers or to beef up the riprap retaining wall, it was pretty nerve-wracking, but I reminded myself about the oregano bees and just moved slowly, talked quietly, and didnâ€™t look them in the eye. No stings.

The other day, Steve showed up to feed the bees. He marched up and lifted the lids, sans bee hat. No hat, no jacket, no gloves, no nothinâ€™. It was a nice fall day, but the area where the hives are was still cool. “Are you able to do that because theyâ€™re not awake yet?â€ť I asked.

“Oh,â€ť he said. “Nah. These are just really mellow hives.â€ť

“Yeah, I think they do,â€ť he said. “Thereâ€™s one place where we get together to play music and those are the mellowest bees Iâ€™ve ever seen. But there are some hives I wouldnâ€™t go near without a suit.

Now, I know that worker bees have a lifespan of only four to six weeks. This means that an individual group of bees in a hive, even if they were desperately in love with their keeper, would die off and then what? A savage new generation of hoodlum bees? Intriguing.

I searched the interwebs and found varying opinions, but all in all, it appears that despite lack of scientific evidence, most long-time beekeepers believe that hives develop personalities and, in fact, recognize their keepers. There are heaps of stories about beekeepers approaching their hive without protection and escaping unscathed, while their unfortunate friend standing several feet away get stung to bits. Pheromones? Facial recognition? Some people think the bees develop the attitude toward the keeper in the same way they imprint on their home hive, generation after generation.

Weird, right? But also amazingly cool. Iâ€™ve come to believe in the collective mind of the hive. I still approach with caution, but I think they sense my good intent and my unswatty attitude. If they land on me, I let â€™em. Weâ€™re bonded, my hives and me.