The Ivy At Christmas Time

Once popularly paired with holly, English ivy over time fell out of favor of home decorators preparing for winter. 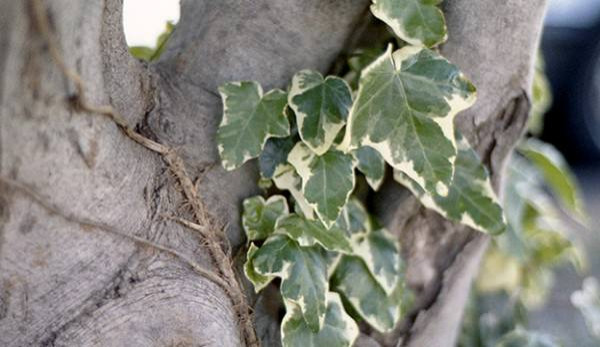 “The Holly and the Ivyâ€ť is a British folk carol dating back to the early 1700s that has been passed down over the ages. Different versions of the tune have been written down, all while the words were happily passed down simply by singing it year after year.

I suppose the first time I ever heard the song was when my mother took me to see Charles Dickensâ€™ A Christmas Carol. The carolers that are rebuffed by an angry Scrooge at the beginning of the play were singing the song. “The Holly and the Ivyâ€ť became forever tied to British tradition for me from that point on. There is something old that breathes through the lyrics that I like, a connection with a shared history that is much larger than myself.

Why Holly and Ivy?

As a botanist, I am always curious about the meaning behind plants that are mentioned in song. In this case, Iâ€™ve spent a lot of years taking for granted the idea that the holly and the ivy are being glorified as a pretty decoration. This is partly true, but there is so much more to the story.

Long before Christianity reached the European continent, people used the evergreen plants found in forests to decorate their homes for the winter season in general and for the solstice in particular. Holly shrubs were plentiful, one could often find ivy growing underneath in solid mats or twining up neighboring trees. Ivy is more commonly known to us as English ivy (Hedera helix). The plant remains green year-round, and in the winter, it is further decorated with blue-black berries.

When Christianity filtered through Europe, the holly and ivy plants were co-opted into the Christmas celebration. This wasnâ€™t a smooth transition, as the folks who were outside the Christian religion had sacred meaning attached to the evergreens and resented their use. Church leaders also disapproved. The symbolism stuck, but the dissonance was captured in the carol, “The Holly and the Ivy.â€ť

At the time, the holly was symbolic of masculinity and was readily absorbed into Christian symbolism, each part of the plant matching a different aspect of Christâ€™s life. The ivy was symbolic of femininity. While the pagans venerated both together, Christianity wished to pull one out in favor. The Christmas carol that resulted from this struggle mentions the ivy only in the first line. The rest of the song is completely focused on the holly. As a comparison we hear that of all the evergreens in the wood, the “holly wears the crown.â€ť Masculinity and Christianity won out over the old ways, and church-goers could safely sing about these pagan symbols at Christmas time because they had fully been absorbed into the Christian tradition.

Today in America, English ivy isnâ€™t very popular. It achieved invasive status, growing with such wild abandon that it weighs down and uproots small trees. In Oregon and Washington, itâ€™s illegal to sell or plant it. If you live in a state where you can grow English ivy, itâ€™s a commitment to grow. Once established on a wall or arbor, the ivy is difficult to remove.

In Europe, the leaves are used both externally and internally for medicinal purposes. Externally, it is a great tea or balm to rub on sore and arthritic joints. Internal use is a bit more problematic.

The ivy plant should only be administered by a knowledgeable practitioner. Studies have shown that ivy can be beneficial in the case of respiratory ailments, such as general congestion and chronic asthma. However, itâ€™s suggested that ivy can be toxic when in the wrong hands.

This Christmas Iâ€™ll be looking at the holly and the ivy in my garden beds and singing this ancient carol with new respect.