The Joys & Sorrows Of Raising Lambs

Raising lambs is an undeniably joyful endeavor, but the reality of death on a farm can introduce sorrow into the experience. 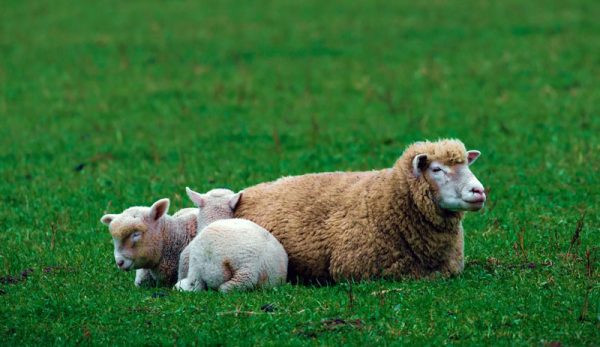 Life is settling down with the new lambs, which really arenâ€™t so new anymore! Theyâ€™ve all had their first dose of CDT vaccine and are eating grain and hay like pros.

We did have one sad event, though. One of the lambs died just this week, very unexpectedly. This little ewe had had some problems almost from day one, such as pink eye that affected both eyes that may have impaired her vision in one eye.

We had taken her to our large-animal vet for that. But so when she began walking unsteadily and falling down this week, we took her in again.

The vet was as perplexed as we were, especially when we found her temperature was 105 degrees F! (That is very, very high. Normal is 102 to 103 degrees F). The lamb was given two strong antibiotics, some pain reliever and a shot of vitamin B12.

The vet also said the lambâ€™s weight was good and she didnâ€™t seem to have any other issues. So we went home with a bag full of syringes of vitamin B12 and pain reliever. We also got instructions on how often to administer the shots.

Read more: Read about one shepherd’s experience with first-time lambing.

Sadly, she died the next day. When you have livestock, dying animals are something you inevitably have to deal with, even when you do your best.

We separated the lambâ€™s mother and put her in with a small group of yearling ewes that are only on pasture and hay right now. Previously, we had fed her and all the ewes producing milk grain each morning. The grain helps to maintain the eweâ€™s milk supply, which is needed by hungry young lambs.

By feeding her only hay, the eweâ€™s milk supply should dry up fairly quickly. I have been out to check on her once a day just to make sure that is happening.

Of course, the lambs get grain as well. They also love hay and boy, do they love going out into the green pasture to nibble on grass with their moms!

Read more: Here’s an overview of what you need for lambing season.

It’s fun to watch the lambs gather together in the field and â€śhang outâ€ť with each other. It’s a lot like human children at a large gathering. They find the other young ones far more fascinating than the adults.

Except, of course, when it’s time to nurse. Then each of the lambs will run to its mother and stick close for a bit.

Our one bottle lamb is nearly weaned. She is about a month and a half old, which is the age at which you are supposed to wean them from the bottle. Most of the information I have read says the lambs should be 20 to 30 pounds or between 30 to 45 days old.

I have not weighed her, but I am guessing she is close to 20 or 25 pounds.

At any rate, the amount of milk I offer has been drastically reduced … but that has not reduced her enthusiasm for seeing me and a bottle in my hand! She is quite noisy when she thinks it is time for a bottle, even if it is not due for an hour or two!

All in all, our lambs are growing well and are starting to look more like the adult sheep they will soon become.