Transport farm supplies around your winter wonderland with every kids favorite snow-day toy. 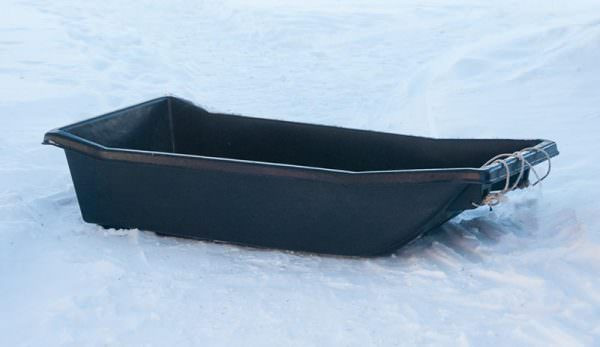 It can be hard to believe, but some people are big fans of winter. They enjoy the snow and the activities that come with it, and they are often disappointed if winter is mild and warm. However, youâ€™d be hard-pressed to find a farmer that counts winter as their favorite season. When farm chores require you to head outside every day, multiple times per day, like clockworkâ€”even when itâ€™s minus 20 degrees F outside and the snow is 2 feet deepâ€”the concept of â€świnter wonderlandâ€ť seems more and more far-fetched every minute.

But hey, winter isnâ€™t all badâ€”in fact, there are some cases where snow makes things easier, and thatâ€™s where snow sleds come in. To be more specific, when I say â€śsnow sled,â€ť Iâ€™m referring to large polyethylene sleds somewhat like this one, which easily glide through snow and allow you to transport heavy loads of supplies with ease. Need to carry a couple of hay bales to your pastures or from a hayshed to your barn? In the summertime, you might use a small yard cart pulled by hand or by a lawn tractor/ATV, but believe it or not, snow sleds are superior in many ways.

For starters, snow sleds donâ€™t have wheels and arenâ€™t elevated above the ground; as a result, their center of gravity is very low, making it very hard for them to tip over even when carrying large loads. However, it is possible to stack hay too high and lose your load when making tight turns. Ask me how I know.

You Can Carry Big Loads

Snow sleds tend to be larger and lighter than yard carts and small trailersâ€”a single person can easily pick one up and carry it aroundâ€”yet the large size provides plenty of space for larger objects like bags of shavings or firewood.

You Can Maneuver Them Yourself

Perhaps the biggest benefit of snow sleds is that theyâ€™re remarkably easy to pull by hand. In the right snow conditions, they slide across the ground effortlessly, making it possible for a single person to pull a couple hundred pounds by hand.

They Can Be Used Year-Round

In addition, snow sleds arenâ€™t only for use during the winter! While they arenâ€™t as easy to pull in non-snowy conditions, they slide reasonably well over grass, and with an ATVÂ to do the pulling, youâ€™ll still be able to transport large loads while taking advantage of the sledâ€™s low center of gravity.

While you might not think of this immediately, many snow sleds are also watertight and will float in water, making them ideal for all sorts of adventurous tasks that involve a variety of terrain. As a hobby farmer, perhaps you donâ€™t need a floating sled, but then again, maybe itâ€™s exactly what youâ€™re looking for!

Needless to say, Iâ€™m a big fan of snow sleds and use them all winter long.