All day long Mom wrote for fifteen minutes, then she’d run out and check the ewes. 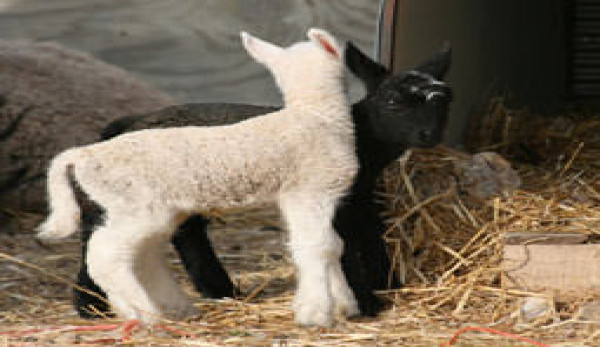 All day long Mom wrote for fifteen minutes, then she’d run out and check the ewes. Ursula was restless and nesting (that means she kept turning in circles and pawing the ground) but she just didn’t lamb.

Dad went to work and the day grew on. Pretty soon it was time to feed. Mom raced around flinging feed and watering, so she could get back to Ursula. She speed-milked Latifah in record time.

Night fell and a big full moon rose in the sky. Ursula waddled here and there, checking all the comfy, bedded shelters and outdoor places Mom made for her, then flopped down in the dirt by Ramsgate (that’s the rams’ pen). I guess she wanted the rams to see what trouble they cause.

Since we don’t have electricity in the sheep fold, Mom helped Ursula lamb by flashlight. She was not amused. Especially by Ursula’s choice of birthing spots. Ursula pushed and pushed and got up and lay back down and pushed and pushed some more. No lambs came out. Finally two little hooves appeared. Mom says they were enormous!

See, Ursula is fat. Really fat. She’s the fattest of the big fat sheep on our farm. It’s not good to be fat and pregnant because the babies get big and it’s hard to push them out.

Mom kept saying, “Here comes Lambie!” (She always says this; we could hear her down by our pen) But Lambie wasn’t coming, so Mom had to help. She put slippery stuff on Ursula and on her hand and then she waited until Ursula pushed really hard.

While Ursula pushed, Mom reached in and grasped both front legs at the fetlocks and gently pulled in an arc down toward Ursula’s hocks.

Then, out came Lambie! It was a big, black girl.

Mom stripped the goo from her nostrils and waited until Ursula started to stand. That broke the umbilical cord. Mom whipped up the gooey lamb, snipped her cord an inch and a half from her tummy, dipped the stump, and took her to a nice, bedded spot.

Ursula followed. She licked Lambie (mamas know to do that when you’re born) and Mom used her sweatshirt to wipe dirt off of the lamb. Then Ursula stopped licking and looked thoughtful. And she started nesting again.

Ursula gave birth to a second lamb. It was white and another girl! She looked happy but confused. She never had twins before.

When Dad got home, he and Mom put Ursula and her lambs in a comfy, bedded Port-a-Hut and shut them in for the night. That way the ewes had time to bond with their brand new lambs.

Now they’re all together, except for Wren and her lamb. Wren “loses” Hannibal when they’re out and about. She forgets she’s a mom and runs off with her friends, then notices that Hannibal is missing. Then she gallops around baahing till she finds him again. Mom says she needs more time in the jug. Uzzi and I think she needs a GPS.