The Many Wonders Of The Woodlot

You can reduce your fuel and food costs by heating with and eating from your woodlot and yard. Learn the basics of woodlot management. 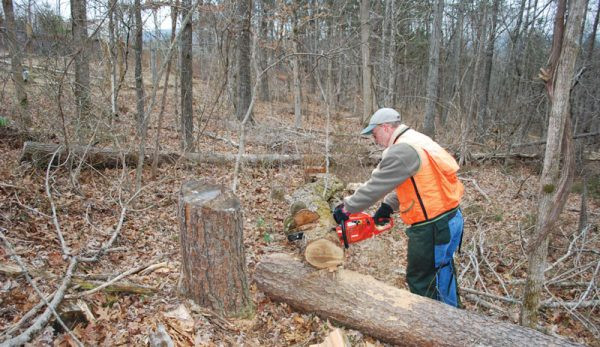 Chances are that if you own a hobby farm, you have a woodlot, whether itŌĆÖs a spread of 5 acres or 50. I believe that anyone with a woodlot can not only maximize its benefit to wildlife but also let it serve as a way to save on heating and food bills.

My wife and I live on 38 acres that also feature a home for our daughter, her husband and their two boys. Both households gain all their firewood from the land. Plus, my son-in-law and I hunt the property, and we gather many gallons of wild berries as well as nuts. Here are the steps we initiated and the acts we took to make our land more hospitable to wildlife while also being more productive for us.

1. Stop Mowing So Much

One of the first things my wife and I did after we bought the land, cleared some trees and had our house built was stop mowing approximately one-third of the already small lawn. We planted the typical garden on one part of the former lawn, but we merely let the other section grow up in weeds and briars. Within three years, those briars became blackberry vines that now serve as the base for part of the 10 gallons of wild raspberries, blackberries and wineberries that we set as our goal to gather every summer.

Wild berry plants require ŌĆ£disturbedŌĆØ land, meaning soil that has been in some way overturned from clear cuts, brush hogging, mowing or disking. So every few years, I mow or otherwise disturb this section of the ŌĆ£lawnŌĆØ to keep it in the early successional stage, in order that tree saplings donŌĆÖt crowd out the berry plants and keep them from bearing. Songbirds such as towhees, brown thrashers and Carolina wrens nest and feed in this thicket, and rabbits dwell there, too.

Many landowners donŌĆÖt understand the benefits of clear cuts to wildlife and to help a woodlot provide food. But the fact is that many species of songbirds as well as game and nongame animals require clear cuts (also known as young forests or early successional forests) to breed, feed and hide from predators. For example, in 2006, we asked a logger to cut a 4-acre swath at the south end of our land, and in 2010 we invited a logger to cut a total of about 10 acres on our eastern and western sides.

These two cuts offered us a wealth of benefits, not the least of which was our gaining enough income to more than pay for our property taxes those two years. The young forest land also became home for additional wild berry patches and attracted even more songbirds such as yellow-breasted chats, chuck-willŌĆÖs-widows and white-eyed vireos, all of which nest there. Wild turkeys soon began nesting on our land, and whitetail deer birth their fawns in these copses, too. Throughout the year, these and numerous other species of wildlife visit the young forests of our woodlot to feed and find cover.

3. Make Your Land a Mosaic

Many people donŌĆÖt understand that woodlots, in their best and most productive state, should be a mosaic, meaning that the trees growing there should represent a variety of different ages and habitat types. The least productive woodlot would be one whose trees are all the same age, regardless of whether theyŌĆÖre all old growth or all young forest.

For example, through timber cutting and timber stand improvement (more on TSI later), I have created a variety of habitats on our property. Out our backdoor lies the hardwood hollow, which largely consists of mature members of the white oak family (white, post and chinquapin), red oak family (Northern red, scarlet and black), plus shagbark and mockernut hickories, black walnut, persimmon, dogwood, pawpaw, wild cherry and black haw trees. I have conducted timber stand improvement throughout this hollow, so that the remaining trees can provide more food for wildlife and for the two families.

Basically, TSI is the cutting of smaller, less valuable trees (either as wildlife or human food or for timber) so that the nearby trees can receive more sunlight, grow larger crowns and produce more hard mast (acorns or hickory nuts) or soft mast (dogwood berries or wild cherries, for example). In the hardwood hollow, I often remove trees such as ashes, maples, poplars, black locusts or pines so that nearby mast bearers can become more productive.

The hardwood hollow is an excellent place for my son-in-law and me to bow hunt in the fall, and we annually take several deer there. I have also called
in and killed numerous wild turkeys in the cove. Additionally, the shagbark and mockernut hickory nuts are an underratedŌĆöand extremely tastyŌĆöaddition to homemade breads. Of course, wild black walnuts can be used in a variety of breads and cookies. And persimmons and pawpaws are excellent as the main ingredients in breads and cookies. Persimmon and wild black walnut loaf makes the best bread IŌĆÖve ever eaten.

Some folks with, say, a 5-acre parcel might think that they couldnŌĆÖt conduct a timber cut on their property, but I believe they can. My advice is to identify your mature hard and soft mast producers, then cut down the trees nearby that inhibit their growth. Annually, all of our firewood comes from our hardwood hollow, which is about 15 acres. The thinning of just a few acres could give the smaller-scale landowner enough firewood for a season or two. Meanwhile, this individual or family would do something that benefits wildlife as well as themselves if such species as hickories, walnuts, cherries or persimmons are present and can be ŌĆ£daylightedŌĆØ with a chainsaw.

Additionally, the limbs and tops of the trees cut can be piled together and turned into brush piles, which become bedding, hiding and feeding areas for birds and small mammals such as rabbits. Trees that arenŌĆÖt good for firewood, such as poplars, can be added to the piles.

Besides our hardwood hollow, and the young forests on the southern, eastern and western sides, we have several other habitat types: a creek hardwood bottom, two red cedar thickets and a seeded road that I designed when the clear cuts took place. This road runs along the perimeter of three-quarters of the property.

I donŌĆÖt do any timber cutting in the bottomland, so as to prevent erosion. The creek is also the source of fresh fish to eat. The pair of cedar thickets provides thermal cover for wildlife in the winter, and the seeded logging road offers edge habitat between the mature forest and the clear cut.

Many species of wildlife, including songbirds and deer, feed on the abundant forbs, weeds and berries that thrive in the edge between forest and the road itself. The road is also another source of wild berries for the two families. Furthermore, I have planted two wildlife-attracting plantsŌĆöclover and chicoryŌĆöin the road to further enhance it.

Over the years, weŌĆÖve made our yard even smaller by planting fruit trees and establishing two chicken runs. Our fruit tree lineup includes two North Star sour cherry trees, a Dolgo crab apple tree, and Grimes golden and black apple trees. The North Star produces cherries in May and June, the crab apple bears in September and October, and the young Grimes and black twig trees bear in October and November, respectively.

In short, this lineup gives us fresh fruit throughout much of the growing season. I also created another opening in the forest (gaining some firewood in the meantime) and have planted a crab apple and pear tree thereŌĆömore food for us and wildlife.

By planning your tree plantings in this manner, you can make your yard and other openings in your woodlot more of a food source throughout the year. And, of course, our hens are our source for eggs and a surplus cockerel or older hen often becomes the entre╠üe for a Sunday lunch or weeknight dinner.

5. Power Up With Wood and Solar

Several of the tree species that can be removed from your woodlot when doing TSI projects make for excellent firewood. For instance, for the past several years, my son-in-law and I have targeted ash trees for cutting. The emerald ash borer, an Asiatic invasive, is killing ash species throughout their range, so we have been cutting down these trees, many of which the borers have already infected.

We also have concentrated on black locusts, trees that have little to offer wildlife, yet a hardwood that provides superb heat. Red maples are common on our land as well, and, though not hardwoods, they do serve as a good choice for kindling. And, of course, we even remove young oaks and hickories that are in competition with other mast bearers.

Finally, consider putting some solar panels on your roof. My wife researched solar panels about five years ago and determined that our roof was well situated to soak up the sunŌĆÖs rays. While writing this article, I asked her what our average monthly electric bill has been for the past 12 months. Her response was $15.33. With power generated with wood from our small forest and our solar panels, we really donŌĆÖt have to worry about exorbitant electric bills.

No matter the size of your woodlot, you can perform for your family and wildlife a great service by prudent timber harvests, timber stand improvement projects, creation of openings and various plantings. ItŌĆÖs always a good thing to spend less money on food and energy.