The Mushrooms Are Mushing!

OK, that might not be the technical term, but the mushroom logs I inoculated are starting to fruit. 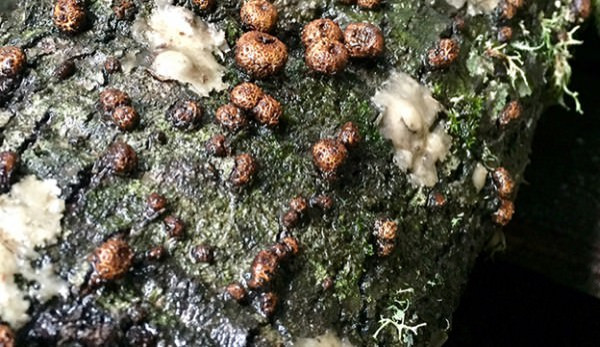 Itâ€™s fruiting! It actually worked!I wanted to sing! I wanted to dance! I wanted to call the lovely folks at Fungi Perfecti and make kissing noises over the phone!

It worked despite me not following the rules of mushroom cultivation to the letter. I did really well inoculating the log, but there were a few other steps, like making sure it stayed moist and “plantingâ€ť it upright in a sand bucket, that I kinda glossed over. And by “glossed over,â€ť I mean didnâ€™t do at all. To be honest, between the extended drought and my inattention to their needs, I figured my spawnlets had shriveled up in their tiny, wax-capped wood caves and that I would never realize my dream of digging into a pile of home-grown lionâ€™s manes.

These â€™shrooms are delicious. When mature, theyâ€™re white and shaggy and taste a bit like scallops or lobster when sliced and sautĂ©ed. Right now, theyâ€™re just little puffy buttons, but soon they will be several inches across, ready for harvest and a nice bath in butter and white wine.

Also called “bearâ€™s head,â€ť “pom pom blanc,â€ť or by their Latin name, Hericium erinaceus, which basically means “hedgehog,â€ť these yummy puffballs are more than just delicious. Theyâ€™re purported to have great medicinal value, as well. Studies show they can improve cognitive ability, encourage nerve growth and facilitate healing wounds. Theyâ€™re also used to treat gastric ulcers, esophageal cancer, are loaded with antioxidants and help regulate blood lipid levels. And did I mention the scrumptiousness factor? I believe I did.

Wow â€¦ and I grew these little suckers in a log stuck under my deck that I basically forgot about. Itâ€™s giving me hope for the shiitake log right next to itâ€”no signs yet, but Iâ€™m feeling optimistic.

Mushrooms, in general, are pretty amazingâ€”the way they grow is just nuts. They start with a spore, a microscopic “mushroom seed,â€ť if you will, although spores arenâ€™t really seeds at all. They donâ€™t contain chlorophyll like seeds do; instead, they rely on substrates like sawdust or wood for nutrition instead of photosynthesizing. They increase in size by cell enlargement, instead of cell division, like the rest of us. The actual mushrooms are the fruit of the mycelium, which is that white thread stuff you see sometimes when you kick over a rotting log. Itâ€™s the mycelium that absorbs the nutrients. Mycelium is vital to our ecosystem, because it helps decompose plant material, among other things.

Mycelium, for the lack of a better expression, is a total trip. If you Google it, be prepared to go down a deep, deep rabbit hole. The stuff is fascinating. You start with a simple Google search for “myceliumâ€ť while sipping your morning coffee, and suddenly itâ€™s midnight and you havenâ€™t even scratched the surface. Thereâ€™s some startling research (legit research, not just the hippie kind) by actual universities out there on the health benefits of mushroomsâ€”like this one from the University of Washington, focusing on the Turkey Tail mushroom as a cancer treatment.

The lionâ€™s mane mushroom: delicious, disease-fighting and, apparently, pretty easy to growâ€”even for me. Who knew?