I love Via Betti , which is the street on which we live. 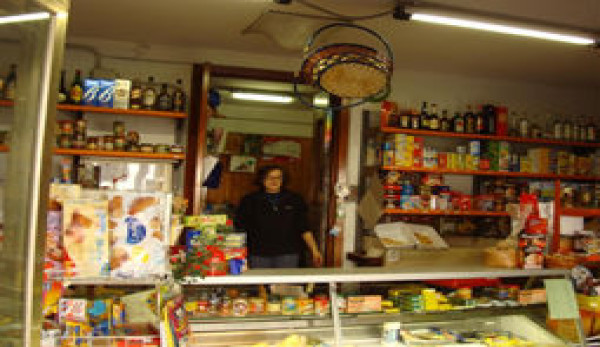 IÂ love Via Betti , which is the street on which we live.Â  It runs alongside the big creek that empties into the bay in downtown Rapallo and goes all the way up to the top of the coastal mountains.Â

The last business on the street, about a hundred yards below our home, is a charming little food market called Adeleâ€™s.Â  The photos this week are both of Adeleâ€™s, which is a real breath of quaint air for a Californian accustomed to shopping in huge supermarkets.

There are a bunch of other food markets on the street as well, and when I first moved here I would pass eight little food markets during the fifteen-minute walk along the creek to reach my office in downtown Rapallo.Â  There are a lot of other stores along the creek too, like butchers, bakeries, tobacco shops, newspaper stands, pharmacies, pet stores, fresh fish stores, dry cleaners, hairdressers and bars.Â

One of the things I really like about Rapallo is the proliferation of all the various business types in a town with a population of 30,000 people.Â  Iâ€™ll bet there are twenty butchers, fifteen fresh fish shops, and maybe a hundred different little general food stores, not counting the four or five actual supermarkets.

The creek has a lot of history behind it.Â  Just today one of my neighbors was telling me about how when he was a child, the local kids would swim in the water and the local women did their laundry in the creek.Â  There are still the visible remnants of two of these communal washing areas.Â

Further up the mountain there are still the ruins of several old water wheels that powered mills that ground grain for the locals until the beginning of the twentieth century.Â  Somebody once showed me where the old Etruscan bride was near our house, and on the other side of the bay of Rapallo there is a bridge that Hannibal built to cross the larger river that flows into the bay there.Â

All along the top ridge that is the edge of the watershed for the creek one can still see the sites of the German lookout stations leftover from the Second World War.Â  The street itself was renamed Via Fratelli Betti (Betti Brothers) in 1946 to honor the memory of two Rapallo brothers who lived alongside the creek when they were young and were killed in the war.

Today the quality of the water isnâ€™t perhaps what it once was, but itâ€™s still clean enough to host a huge fish population.Â

The big Cephalo in some of the ponds are two and three feet long, and once in a while we see big eels that have come up the creek.Â  The strip of greenery winding up through the tall buildings acts as a nice park, and we particularly enjoy being able to hear the splashing water at night from our bedroom.Â Â Â