The Night Shift: Get To Know Nocturnal Ground Beetles

These pest-eating insects creep around your garden when others are asleep. 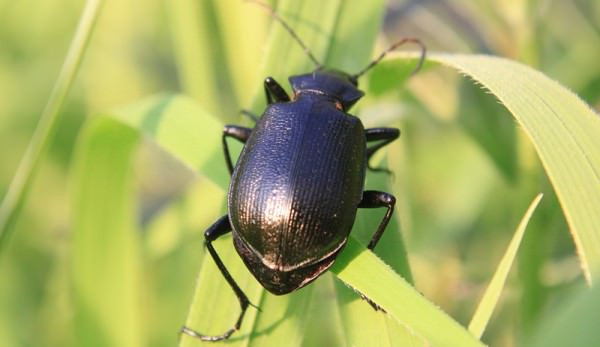 Because ground beetles are largely nocturnal, many gardeners may be unfamiliar with them. Perhaps the best chance of encountering ground beetles comes when homeowners flip over rocks or lift up planters during the day: The small, dark-colored beetles scurrying away from the bright sun are likely to be some type of local ground beetle. These little beetles, seldom seen in the light of day, hide an important secret: They like to eat pestsâ€”and lots of them!

The scientific classification of ground beetles (Carabidae) places them in the same family as the tiger beetle, another important group of beneficial beetles. More than 3,000 ground beetle species are found throughout North America. Most have the classic beetle shape, with a flattened head, long segmented antenna and large mandibles to catch their prey with. These beetles tend to be small, ranging of 1/4 to 3/4 inch long, though some less common species can grow to longer than 1 inch. Many are dark brown or black, while others exhibit bright metallic blue and green shades. Metallic hued ground beetles tend to be more active during the day, as their coloration is designed to reflect heat. The diversity of appearance and size of ground beetles reflects the vast number of species in the Americas.

Both adult and larval forms of most ground beetles tend to be carnivores or omnivores with a hungry appetite for a range of caterpillars, snails, slugs, and other ground-dwelling insect pests. Different species target specific types of prey, but most of these beetles are amazing friends around the garden that should be welcomed.

Encourage Ground Beetles In Your Garden

Gardeners can encourage these nocturnal beneficials with several easy steps: