The No-Soil Solution – Urban Farm Onlinehydroponics, aquaponics, soil-less gardening, aeroponicOne advantage of hydroponic food production is that the plant will not need to develop such an extensive root system if all of its nutrients are delivered directly to the plant, allowing the plant to put its energy instead into greater growth rates and harvestable […] 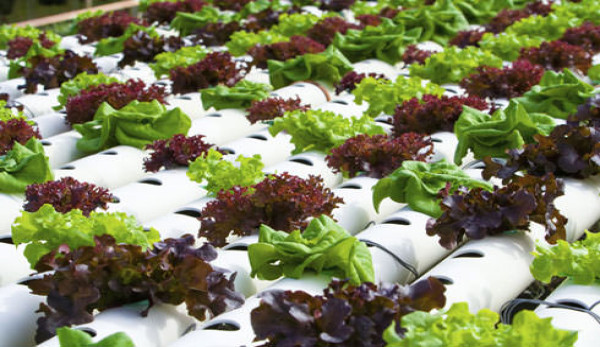 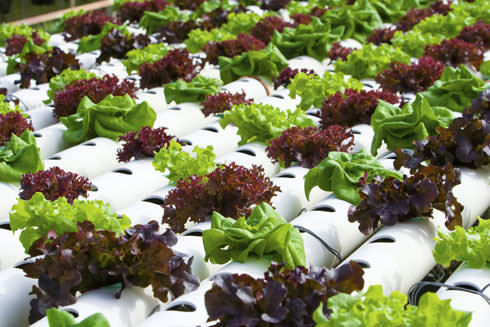 Imagine an urban landscape where a mosaic of ground-level community gardens and rooftop farms provide city residents with a significant amount of healthy food. Gazing across these rooftop farms, you see lush vegetables flourishing in a combination of typical planter boxes and unusual structures that contain no soil whatsoever. Much lighter than soil-filled planter boxes, these structures cover vast stretches of rooftops that haven’t been reinforced — without causing structural concerns. Upon closer examination, you see a tiny trickle of dark water flowing across the very tips of the vegetables and returning to a reservoir container.

This seemingly future-fantastic method of food production, called hydroponics, has already been used to grow food commercially for several decades. Greek for “water” and “work,” hydroponics is a method of growing food without using soil. Instead, a liquid solution containing plant nutrients is applied directly onto the roots of vegetables.

A lightweight, sterile medium, such as expanded clay or vermiculite, is used to provide structural support to the plant and to wick moisture. It’s possible to grow most vegetables using hydroponics, with the exception of nonaquatic tubers, such as potatoes, and root crops, such as beets and carrots, which will rot if continually immersed in liquid.

In soil-based gardening, plants rely upon microorganisms that live in the soil to convert minerals and nutrients into forms that are useful to them. Plants spend a considerable amount of energy developing root systems that support the microbes and transport nutrients and water to the plant. One advantage of hydroponic food production is that the plant will not need to develop such an extensive root system if all of its nutrients are delivered directly to the plant, allowing the plant to put its energy instead into greater growth rates and harvestable yields. Also, because not nearly as much space is required for root development, vegetables in a hydroponic system can be planted slightly closer together than in soil.

An advantage that is perhaps of most relevance to urban gardeners is that the soil-less systems used in hydroponics weigh very little relative to soil-based gardens. For this reason, rooftops with limited weight-bearing capacities can support far more plant growth using hydroponic methods.

The biggest drawback to conventional hydroponics is that the nutrients used in the solutions are most often made from synthetically derived, refined mineral salts. These fertilizers are commonly created through industrial-based processes. Therefore, most hydroponics cannot be considered “organic,” as USDA National Organic Program standards only allow for the use of unprocessed, mined mineral or animal-based fertilizers, such as rock dust, blood meal, bone meal and animal manures. Many organic fertilizers can’t be used in hydroponics because their nutrients are generally not water-soluble. Certain critical nutrients, particularly phosphorus and potassium, are typically absent in aqueous solutions. While there are hydroponic solutions marketed as ‘organic’ that contain a predominance of natural materials, they should be carefully checked to ensure that no synthetic ingredients are included. Truly organic hydroponic growing is a challenge.

“While there are currently no federal organic standards for hydroponic or soil-less growing, the regulations do not prohibit hydroponic operations from seeking certification,” says Soo Kim, public affairs at the USDA. “They would have to follow the same procedures, guidelines and inspections as soil-based farms. In part, this prohibits the use of synthetic substances … There are currently a few (but not many) operations that are now certified to produce hydroponically.”

Disposal of the nutrient solution also creates a dilemma because it contains mineral salts, dumping it on soil could cause a buildup of salts. Although most people pour it down the drain, leftover nutrients could contribute to the eutrophication of local waterways.

Another downside to hydroponic systems is the high startup and operational cost. A starter kit to grow six plants costs around $100, while one could easily drop $1,000 on a larger system and accessories. In addition to the initial investment, pumps and aerators must be continually powered, and fertilizers must be continually replenished over the long-term.