The Parsley Worm: A Love-Hate Relationship

You may be conflicted about finding this caterpillar in your garden—whatever you do, handle the situation with care. 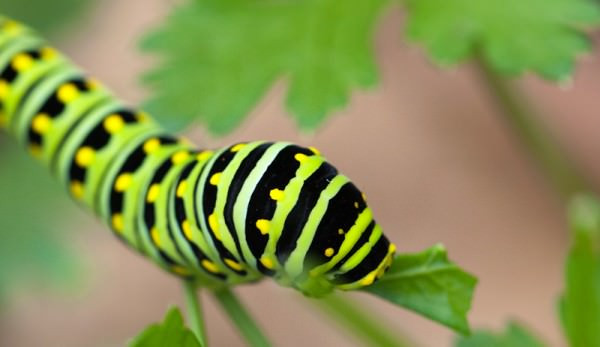 If you grow carrots, celery, dill, parsley or any related plants, you may be familiar with the parsley worm caterpillar. This particular caterpillar is hard to miss with its large size, distinctive appearance and huge appetite for plants in the Apiaceae family. While you may not love to see it munching on your carrots and herbs, it’s the larva of an important native pollinator: the black swallowtail butterfly.

Sporting a broad 2-inch-long body, the mature parsley worm caterpillar is pale green and covered with a series of black transverse stripes, each covered with yellowish spots. When agitated, the parsley worm reveals one of its more interesting physical features: a forked orange horn-like projection that extends out from behind the head of the caterpillar to intimidate potential predators and release a repulsive scent. The earlier instars of this larva have a varied appearance and don’t directly resemble the mature parsley worm. Not only is parsley worm visually striking, it is the larva form of the gorgeous black swallowtail butterfly (Papilio polyxenes), which is found throughout North and Central America.

While an avid consumer of commercial crops, the parsley worm should be treated with care as the larval form of an important native pollinator. With the ongoing threat to native pollinators, like bees and butterflies, in North America due to habitat loss and pesticide abuse, insects like the parsley worm should not be treated as common garden pests. Many gardeners who are butterfly enthusiasts actually encourage the parsley worm in their gardens by planting special crops of fennel, dill or parsley just to attract the butterflies and promote an active swallowtail population.

While I personally I believe in encouraging these important creatures whenever possible, there are times when the caterpillars can become a pest. If carrot or herb gardeners are dealing with a just a few caterpillars, relocation or exclusion through row covers may be fine options. In extreme situations where important crops may be in danger of destruction, gardeners may consider using an organic spray containing Bacillus thuringiensis (Bt) that will be effective at controlling the caterpillars.

Again while spraying will help control the parsley worm, it should only be used a last resort, as the black swallowtail is not only beautiful but an important native pollinator that should be promoted—not carelessly destroyed.