At the 1900 Farm at Living History Farms visitors learn how men and women worked side-by-side to run a farm in the early 20th century. 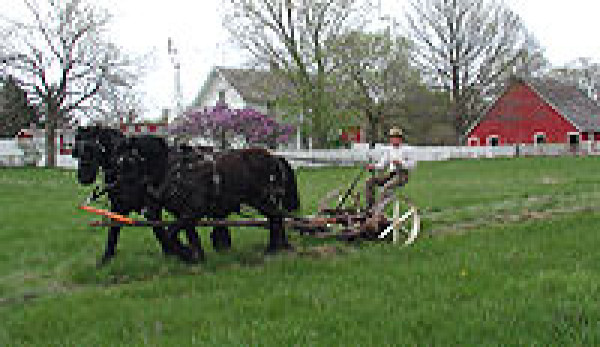 As Alex Foell–the 23-year-old, male supervisor at the 1900 Farm at the Living History Farms near Des Moines, Iowa–walks out of the barn, fresh-faced and well-muscled in blue overalls and a white T-shirt, it‚Äôs immediately evident that, yes, 100 years ago the daily work of farmers was physically demanding.

Only someone oblivious to aches and pains would say about the back-breaking labor, as he did, ‚ÄúIt‚Äôs kind of relaxing.‚Äù

But Foell isn‚Äôt just talking about the fresh air environment where he does his daily chores. He‚Äôs also commenting on the quiet, where the soft snorts of horses replace the grind of tractors churning up the soil.

By day, the recent college graduate tends to the outdoor needs of this 25-acre homestead. In the evening, he returns to his city apartment with all the beeps and flashes of the high tech, visually stimulating environment that exists in most 21st century American homes.

How does the farm compare to his bachelor pad? ‚ÄúIt‚Äôs a lot calmer,‚Äù he says.

Standing in the gravel driveway, between house and barn, under a blue and white summer sky, it‚Äôs obvious what he means.

Except for the low hum of cars on the interstate nearby, there‚Äôs almost no sound. Birds chirp, the windmill clacks in the breeze and time hangs in the Iowa air.

Is this heaven? No, but it might very well be the perfect hobby farm. Lacking the stresses of modern life, it‚Äôs physically beautiful, essentially sustainable, and requires the hard work and commitment of dedicated individuals with distinct and important roles.

In fact, fantasies about the bucolic farm life quickly disappear when Foell discusses just how threatening the farm, which uses only authentic animals and implements, could (and can) be.

Where Reality Does Bite
‚ÄúWhen you work with the machines and the horses, you have to keep your eyes open,‚Äù he says in a clearly understated way.

He is talking, candidly, about body parts, as in if you throw the reins over your shoulder while driving a side-delivery hay rake, you might lose some.

Foell is expressing the matter-of-factness common to farmers of the time (even if they were missing a limb or two).

Their newfangled threshers and plows were Industrial Age gifts straight from the labor-saving gods, a welcomed evolution from the simple, ox-driven sodbuster invented by Illinois neighbor John Deere a mere 50 years earlier.

Foell and the other male interpreter–along with well-educated volunteers and an occasional enthusiastic tourist–currently have 25 acres under production, a typical amount for most Iowa farmers in 1900.

They husband a combination of oats, corn and hay cover, all planted in a five-year rotation to maximize production in the days before chemical fertilizers and pesticides.

The corn, an irregular, heirloom variety called Reid‚Äôs Yellow Dent, yields a lowly 40 bushels per acre, all of which must be shelled by men throwing cobs into a menacing, but decidedly automated, shelling machine.

The farm is mostly self-contained, with field crops meeting the nutritional needs of the animals for the year and a handful of hogs (10 now, 50 in the old days) serving as the primary cash generator for the family.

Horses, not surprisingly, are animal royalty. Foell relies on six Percherons to generate energy for non-mechanical tasks, such as running the simple pulley system that lifts hay into the barn loft, powering the more-complicated mechanisms of the various implements needed to maintain and increase farm production.

‚ÄúThey‚Äôre just the right size and they‚Äôre very docile,‚Äù he says about the Percherons, who weigh in at approximately 1,800 pounds each. And, he adds, ‚ÄúWe do most of our work with them by voice command,‚Äù showing that at 23, Foell has already joined a brotherhood of equine handlers dating back millennia.

Horse handling aside, the jobs performed at the 1900 Farm each day by college educated professionals are not for the weak or weary, which suits Jen Schroeder, the 27-year-old domestic supervisor, perfectly fine.

Reflecting on her years growing up on a farrow-to-finish hog farm in northwest Iowa, she says she was never the prissy type.

The inherent dangers don‚Äôt seem to bother the secondary education and history major out of Drake University, either.

She says they serve as a filter by which to see more clearly the lives of her rural ancestors. ‚ÄúIt showed me what my grandparents and great-grandparents went through‚Äù to provide for the family.

For her, the primary risk centers on the stove, a cast iron beast that, when fully heated, smokes in four directions.
¬Ý
‚ÄúThat‚Äôs the biggest threat,‚Äù Schroeder says. ‚ÄúIt all gets hot.‚Äù Like Foell, she seems to have a never-you-mind mentality about this ‚Äúmodern‚Äù machine that keeps the household running and feeds everyone, including the large threshing crews that come in¬Ýfor dinner on¬Ýsweltering, summer-harvest days.

Dressing for Success
One would think it‚Äôs pretty warm, also, on the underside of the voluminous calico dress she and her companion interpreter must wear on Iowa‚Äôs sticky, 98-degree, corn-growing days. Schroeder claims those icons of prairie fashion are quite comfortable and, literally, lifesaving. ‚ÄúHopefully you don‚Äôt get burned if you have your sleeves rolled down,‚Äù she says about her constant proximity to the stove. She shares enthusiastically the benefits of the outdoor chin-to-toe costumes. ‚ÄúThey protect you from the sun, and the heat.‚Äù And, clearly, excessive perspiration¬Ýdoesn‚Äôt worry her. ‚ÄúI don‚Äôt mind sweating,‚Äù Schroeder says. Her skirt, which would seem to trap warm air, actually serves as a fabric fan, allowing air to flow better than, say, a pair of jeans. She says, too, that cotton fiber has an advantage over man-made materials because it ‚Äúbreathes.‚Äù

So, how does a 20-something woman trade her modern freedoms for the seemingly restrictive, backward role of unappreciated farmwife? The simple answer is: She doesn‚Äôt. Schroeder puts the stereotype to rest by explaining that her life on the 1900 Farm is nothing like the picture associated with women stuck at home in pre-feminist America. ‚ÄúYou have to be a team to make a farm,‚Äù she says about her relationships with the men and women there. ‚ÄúWe don‚Äôt want to show it‚Äôs females inside the picket fence and males outside ‚Ä¶ because it‚Äôs not true.‚Äù

She expresses this with certainty, and not just because she grew up watching several generations of men and women partnering on her own family farm. Schroeder and other interpreters spend hours pouring over journals and other historical documents to determine the best way to show early 20th century life; in her reading she has found that spouses of that time recognized the need to get work done, when it needed to be done, regardless of gender. Women, she says, work outdoors with animals when necessary; during the winter months, the men were more than willing to help around the house with domestic chores such as laundry. ‚ÄúWe interpret that the men would want to be inside,‚Äù she says.

Dieting 1900 Style
Talking to Foell, it‚Äôs readily apparent how much the men at the 1900 Farm appreciate the women, particularly at meal time. At the 1900s Farm, the workers have a diet significantly different from the high sodium, ‚Äúcan-o-corn‚Äù fare at the agricultural-themed restaurant (not affiliated with the 1900s Farm) near the museum entrance. Schroeder manages all the homegrown nutrition, cultivating plant varieties that reflect what was available to acreage dwellers of the time. Both supervisors feel blessed to have a constant supply for warm-weather meals. ‚ÄúYou always have fresh produce in the garden from spring until fall ‚Ä¶ which is wonderful,‚Äù Schroeder says. Foell, for his part, admits that eating all his vegetables has made him much healthier and that he‚Äôs given up soda pop, preferring, even in his off hours, the taste of his daytime staple: water.¬Ý

Schroeder also talks about the calorie load required by farm workers and why traditional farm meals, with their huge portions of protein and carbohydrates, were so vital. Between the heavy lifting required by the male farm workers and the women‚Äôs day-to-day exercises of kneading bread, hauling wood and pumping water, she assures concerned visitors that everything ingested is definitely being used by the body. ‚ÄúWhen you see us working outside, we‚Äôre working it all off,‚Äù she says. ‚ÄúWe‚Äôre doing different jobs than most people have in today‚Äôs society.‚Äù

Except, maybe, chores. Although a great many characteristics of small farms have changed in 100 years, some have stayed the same. Foell shares with modern livestock owners the never-ending job of feeding animals appropriately throughout the year and hauling manure. He also faces that familiar list of house and building repairs. ‚ÄúThere is a lot of maintenance,‚Äù he says.

Of course there is no perfect acreage, but, according to Schroeder, it is possible to integrate some of that old magic into today‚Äôs hobby farm. She recommends one very specific 1900s routine: ‚ÄúA home-cooked meal–the roast and mashed potatoes–really isn‚Äôt hard to make,‚Äù she says. ‚ÄúIt should be part of your weekly habit.‚Äù To be sure, that‚Äôs one way to cross back into a simpler time where, Foell says, even if it is a lot of work, ‚ÄúYou can still get away from the modern world.‚Äù

About the Author
Freelance writer Gretchen Heim Olson grew up in central Iowa, the daughter and granddaughter of farmers.