Poinsettias can be found in many homes during the holidays, but this tradition stems from a humble gift said to be given to the Christ child. 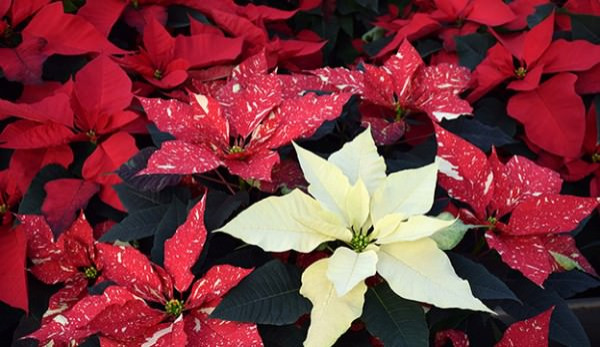 Thanksgiving has passed, and in our house, that means itās time to decorate for Christmas. This will mean, of course, dragging out all the snowmen, nativity scenes and Santas. Our Christmas dĆ©cor will also include a few fresh flowers and plants, which weāll explore here on this blog during the month of December.

Perhaps the most iconic of Christmas plants is the poinsettia. At some point during the holiday season we wind up with at least one of these beautiful plants in the house. Every year, I hear the whispered warnings from those who somehow fear that an animal or child will make a snack out of the red and green leaves. According to a 2013 Floriculture Statistics report, these fears have not slowed the demand for the poinsettia. Annual purchases of this living Christmas decoration tops 23 percent of all potted plants bought in the U.S. throughout the year. Thatās pretty impressive.

Not Edible, But Not Poisonous

The poinsettia is in the Euphorbia family. Members of this family have a milky residue in their leaves and stems that is considered toxic. Poinsettia (Euphorbia pulcherrima) has been tested numerous times and is not considered truly poisonous. That said, it still isnāt a candidate for a winter salad. If eaten it would cause a powerful stomach ache, to say the least.

The poinsettia is well-known not for its flowers but for its brilliantly colored leaves. The flowers themselves are pretty unremarkable, but the top-most leaves change to colors of red, pink, coral or white as the days get darker and shorter. You might have friends that keep theirs in a closet much of the time for days on end just before the holidaysāthese extended periods of darkness help keep the colored leaves from turning back to green. Some of the more shocking colors you may findāpurple, blue and bedazzledācome as a result of dyes or paint.

A Colorful Gift For The Christ Child

The poinsettia is actually a weed that grows in the ditches and wild places of South America and Mexico. Because this lowly, common plant became so striking around Christmas each year it has been used to celebrate the holiday in South America for centuries.

The poinsettia story goes that there were two children, a brother and sister, in a community that was bringing gifts to the church to give to the Christ child. Everyone was bringing the very best they could afford, but the siblings were very poor and didnāt have enough money to feed themselves. Feeling moved to give something, they went out into the fields and picked the large, green, velvety leaves of a weed they found growing in abundance. They thought the beautiful leaves would make a nice decoration, as well as soft bedding for the manger.

When they had delivered their humble gift, the townspeople began to laugh. Amongst all the splendor they had presented, the weeds were ridiculous. As the children began to feel bad about their contribution, the leaves suddenly burst forth in brilliant color. The gift of love was accepted by the Christ child as the most valuable. The children who had given when they had nothing were honored, and the poinsettia became cemented in Christmas celebrations from then on.

The poinsettia is a transplant. It does not grow in the U.S. as a native and only became part of our traditions after 1828. When we began to grow it commercially, it lost not only its original growing habit but also its cultural context. While I sit quietly pondering the lights on my Christmas tree this year, I will also be gazing at the poinsettia. Now that its story is reinstated in my family, it will hold a much higher place of honor for all that it represents for me about Christmas.