Goats Move Into The Frat House

On some university campuses, the college experience just got a little more interesting. 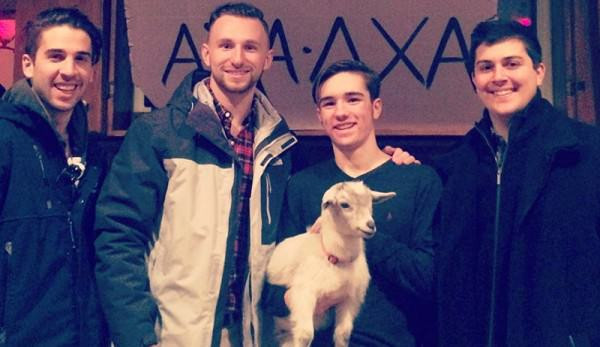 Small goats, with their bouncy personalities and mischievous grins, are endearing animals that have sent the Internet into a flurry over their silly antics. Itâ€™s no wonder, then, that theyâ€™re capturing the hearts of college students everywhere.

According to the Huffington Post, goats are finding homes in places some may argue resembleÂ their traditional on-farm abodes: frat houses. Whether itâ€™s the novelty of keeping a pet outside the realm of the typical four-legged species or the goatâ€™s puppy-like manner that attracts students to create a more literal animal house, more and more goats are learning to adjust to college life.

But as farmers, we have to ask: Is this OK for the goats?

Ryan Walker from The Livestock Conservancy, a nonprofit that works to protect endangered livestock species, says he doesnâ€™t have a problem with itâ€”of course, with one caveat: The goatÂ must be well cared for.

â€śAs far as farm animals go, goats are probably about as close to dogs as one will find,â€ť Walker says. â€śThey are innately curious and generally very sociable, which makes them a better choice than other species if a lot of people will be around.â€ť

In fact, small goat breeds, like Pygmies and Nigerian Dwarfs, are often raised as companion animals, much like dogs. Here are tips WalkerÂ offers to ensure a goatâ€™s transition from farmyard to frat house goes smoothly.

1. Lay Off The College-Kid Diet

Pizza and potato chips have no place in a goatâ€™s diet, evenÂ if they bat those adoring eyes at you, begging for a nibble. Commercial goat feed contains balanced nutrients good for goat bodies. As browsers, goats also need plenty of roughageâ€”so let them loose on the college green for a snack.

2. Get Plenty Of Exercise

â€ś[Goats] need room to run around and things to climb on in order to get appropriate exercise,â€ť Walker says.

Just make sure to block any escape routesâ€”goats are notorious escape artists. â€śThis isnâ€™t as much of a problem for small goats,â€ť he says, â€śbut they are still very clever and know how to jump well and fit through tight spaces.â€ť

The hooves of goats that live mostly outdoors naturally get worn down, but those that spend a lot of time indoors may need more frequent trimmings. Regular trips to the veterinarian are also important to ensure the goat stays healthy, so make sure thereâ€™s a vetÂ that will treat goats in your area.

Single goatsâ€”even those living among a bunch of college studentsâ€”can get lonely if they donâ€™t have one of their own to hang with. â€śGoats are herd animals, and although some may argue that the fraternity is their ‘herd,’ they still enjoy the companionship of other goats,â€ť Walker says. â€śIf they have a choice, they prefer to be with other goats. There are many social dynamics for goats that people just canâ€™t fulfill.â€ť

So if you’re thinking of bringing a goat to your college campusâ€”or even just your backyard in the cityâ€”keep these things in mind. Come to think of it, college students could benefit from this advice, as well!