If the proposal passes, it will be the first bee species to be considered endangered in the U.S. 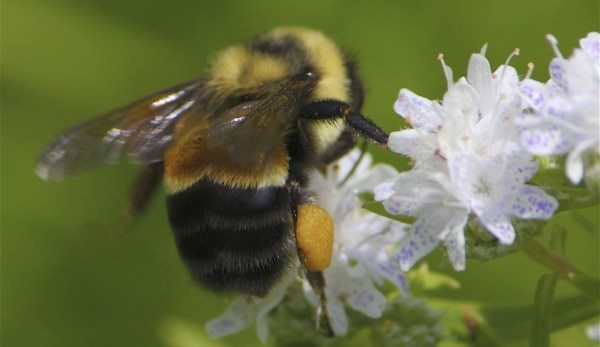 Last week, the U.S. Fish and Wildlife Service formally proposed that the rusty patched bumblebee (Bombus affinis), a native of North America, be listed as an endangered species and protected under the Endangered Species Act. Like other bumblebees, the rusty patched bumblebee (which gets its name from the red splotch on its abdomen) specializes in â€śbuzz pollination,â€ť a technique in which the bee vibrates flowers to shake out the pollen. This makes it more effective at pollinating certain kinds of crops, such as apples, plums, and cranberries, than even honeybees.

Formerly found in 28 states, D.C., and parts of Canada, estimates show that the rusty patched bumblebee has lost about 87% of its historic range, with population numbers dropping by as much as 95%. Possible reasons for its decline include climate change, disease, and the use of pesticides. Following a petition by the Xerces Society for Invertebrate Conservation and a year-long review process, the U.S. Fish and Wildlife Service has concluded that this bee does in fact need protection.

Before the proposal is passed, scientists, government agencies, and the general public will have a 60-day window in which they can submit their input. If youâ€™d like to make your voice heard, you have until November 21 to submit your comments in an online form.