The Saga of Baby Jo

We never intended to have roosters, but when two of the rescue "pullets” we adopted grew long wattles and flowing tails, we realized the chicken life on our urban farm would be different than what we had imagined. 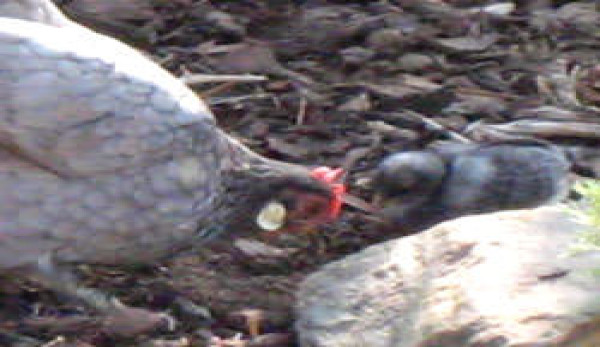 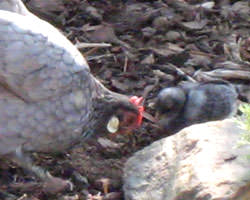 We never intended to have roosters, but when two of the rescue “pullets” we adopted grew long wattles and flowing tails, we realized the chicken life on our urban farm would be different than what we had imagined.

Okay, we were going to have fertilized eggs. That’s not so bad. They sell those for extra in the health food store. We would be vigilant about taking the eggs away from the hens right away so they couldn’t hatch. No big deal.

But then one of our gray bantam leghorn hens disappeared. At first I thought a coyote or hawk had gotten her. I was surprised and relieved to see her out one morning a week or so later, scratching around with the flock. Later in the day, she disappeared again. That’s when I realized she was sitting on an egg somewhere.

Randy and I hunted every day like it was Easter, searching under bushes for that hidden egg. We didn’t give up until the delinquent Jo showed up one day with a tiny gray chick at her side. Seems we hadn’t thought to look under the tack shed.

So Billi Jo had hatched an egg. Or was it her identical sister Betty Jo who had done it? Or maybe her other identical sister, Bobbi Jo? We can’t tell the three sister hens apart, and refer to them collectively as “The Jos”. So the chick became — of course — Baby Jo.

My first notion was to capture baby and mom and keep them confined for Baby Jo’s safety. I managed to corner the tiny fuzz ball against the garage door and placed her in the coop. Instead of Mom going into the coop with her chick, she paced along the side, clucking encouragement to Baby Jo. Apparently baby chicks can shape shift into feathered eels because within seconds, Baby Jo had squeezed through the 1-inch square wire mesh and was back outside the coop.

I fretted for days about her safety — worried she’d be taken by a hawk or a crow or who knows what else. But I had underestimated Mama Jo. I have never seen such fierce maternal instincts. Mama Jo protected that chick like she was a grizzly bear. No one was safe. She chased Foxy the cat around the yard if the poor unsuspecting feline wandered too near the baby. She terrorized our Corgi, Nigel, because he dared to stop and stare at the baby the first time he saw her. She even went after me when I made another attempt to capture the little peep.

Mama Jo was never more than a few inches away from Baby Jo, always clucking to her and teaching her the ways of chickenhood. This doting lasted for many months, even after Baby Jo was almost fully grown. Every night, Mama Jo would roost in the coop with her wing over her daughter, who was nearly the same size as she.

Today, Baby Jo is a full-grown hen, laying her own eggs and trying to hatch them. She no longer has the protection of her mom, which is too bad, because her aunts constantly remind her that she is low hen on the totem pole. But Baby Jo has an outlet for her frustrations. Find out what that is next week.