Give your land dual purpose by grazing livestock among a timber stand—a technique called silvopasturing. 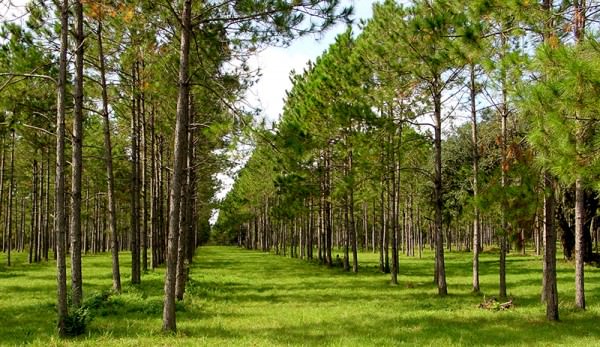 When George Owens and his wife, Pat, became the owners of his family’s farm in 1971, it wasn’t sustainable. The 100-year-old farm specialized in peanuts, timber, cotton, cattle and hogs, but that wasn’t enough to support the operation. Pat, an accountant by trade, insisted that unless the farm could pay for itself, they would have to sell off parcels of land. “We had to have a way to maximize the return off the land,” George Owens says.

While working for the Florida Department of Agriculture, he learned about silvopasturing, a technique that combines the production of trees, forage and livestock on one parcel of land. It’s widely used in South America, though not as predominant in the United States.

The couple decided to learn more and give it a try, establishing their first silvopasture in 1984. Starting with an open parcel of land, they planted pine trees and forage, and prepared the land for the introduction of cattle.

“By going to the silvopasture system, I’ve been able to generate four or five incomes per year simultaneously on each acre of land,” he says.

Silvopasture not only provides an economic boost, but it’s also a respected conservation practice. The system maximizes the use of the land while helping conserve the natural resources and is a widely practiced agroforestry system most anywhere that cattle and trees can be grown together. Silvopasturing can be used to manage invasive species and reduce livestock heat stress, and in some areas, it’s used to reduce the risk of wildfires. “Statistically, there are more acres of wooded grazing land in the U.S. than in open pasture lands,” said Brett Chedzoy, forestry specialist at the Cornell Cooperative Extension.

For these reason, Mack Evans of Jakin, Ga., integrated silvo­pastures on his farm. A former field engineer for IBM, Evans relocated to Georgia and was receiving a nice income from timber on a family farm he and his wife inherited. The income was flowing in with little oversight, but the underbrush was getting dense, and he was looking for ways to manage it. While searching the internet, he stumbled across silvopastures. He called his local USDA Natural Resources Conservation Service district conservationist who agreed that silvopastures could work on his farm.

In 2003, Evans created his first silvopasture. He incorporated 40 head of Angus into an existing timber stand.

“With the cattle, I don’t have the competition of the scrub brush to deal with, the trees and the forage are benefitting from the cattle droppings, and the timber and the cattle are thriving,” he says.

Silvopastures are not an easy solution or an alternative for every landowner. They require planning and intensive management to work. But for farmers committed to it, the economic and environmental benefits are tremendous.

Silvopasturing is not to be confused with woodland grazing, which is a passive, low-management system in continuously grazed dense woods; silvopastures are intensively managed with strict rotational grazing and maintenance schedules.

“The goal is to raise functional trees and livestock on the same land for increased overall production,” Chedzoy says. “The goal is also to create synergy, symbiosis and sustainability.”

Silvopastures provide multiple income sources, and they generate revenue at different intervals during production to fill in gaps between the harvest of one crop or another.

The combination of crops varies geographically, so check with your local extension agent for the best formula for your area, but these are the basic components:

The trees you use in a silvopasture range from pine plantations and hardwoods for high-quality timber to nut groves and Christmas tree farms. Before these trees are harvested, salable firewood and other byproducts of routine pruning offer short-term income.

Cattle or meat goats are most often grazed in a silvopasture, but horses, sheep and even geese have been used in some settings. “Geese didn’t work as well because they became food for the bobcats,” Hamilton says.

You can potentially harvest a cash hay crop, and forage eventually becomes a high-protein feed source for the livestock and supports pasture health. “Well-managed forage helps control or keep out invasive plant species,” says Richard Straight, technology transfer leader at the USDA National Agroforestry Center’s Forestry Service in Lincoln, Neb. “And the fertilization that is commonly done as part of pasture management will also benefit the trees.”

Silvopastures in the Northeast have been a bit more challenging largely because of the native woody undergrowth. “Questions about maintaining the diversity of the plant community still exist,” Straight says.

Although there is much to learn about silvopastures in the Northeast, Chedzoy noted there is a significant opportunity for them to work. “The Northeast has millions of acres of underutilized, degraded farm woodland and overgrown former pastures that would be suitable for silvopastures,” he says. “There are also millions of additional open pasturelands that could be enhanced as silvopastures by feasibly incorporating trees.”

Although relatively new to the North­east, silvopasturing has long been used in the Pacific Northwest, from Oregon up into Alberta, Canada. There, sheep and cattle are silvopastured among Douglas fir and ponderosa pine. “In Northern California, a few landowners are managing silvopastures as one tool to reduce hazardous fuel loads and risk of wildfires,” Straight said.

In the Midwest, in states such as Miss­ouri, Illinois, Wisconsin and Minnesota, researchers and landowners are using and examining how silvopasturing can be used to manage invasive species, reduce livestock heat stress and more actively manage their woodlands.

“These regions had a somewhat different farming history, as well as conifer forests that were generally not as sensitive to heavy grazing pressure as hardwoods, so the practice of grazing animals in wooded areas never became as taboo there as it did in the Northeast,” Chedzoy says.

Aesthetics are also important benefits. These systems create “parklike” settings. “Down the line, if our children decide to sell the land when they take it over, it will have a higher value than wide-open land,” Owens says.

On the timber side of the business, loggers tend to pay more for the wood products because they are typically higher quality than unmanaged timber stands. The well-cared-for trees are easier to remove without damaging equipment or other trees.

Grazing Management In A Silvopasture

Rotational grazing is the key to success in combining livestock with trees.

“This isn’t a good fit for someone who hasn’t yet learned the basics of rotational grazing,” Chedzoy says.

Livestock are intensively grazed in silvopastures for short durations. Then the livestock are removed so the pastures can rest and recover. “Our cattle spend one week on a pasture and seven to eight weeks off that pasture,” Evans says. “That puts them through each pasture about five times a year.”

Traditionally, cattlemen have been warned against grazing cattle among trees to avoid soil compaction and damage to trees. Quite the opposite is true because the cattle are only on the pasture for short periods of time.

“The animal’s hooves break up the top level of soil and encourages the integration of their manure as a natural fertilizer source,” Straight says.

Not all pastures on the property need to be silvopastures for the approach to work. “More likely than not, you will see a combination of traditional and silvopastures,” Straight says.

It’s equally important that landowners are well versed in forestry management. Trees, unlike most other plants, are slow to show signs of stress, and when they do, it’s usually too late to reverse the damage.

“The manager has to be careful not to unintentionally damage trees in the silvopasture system because once the signs become visible, it’s too late,” Chedzoy says.

Thinning, pruning and harvesting schedules vary based on the system itself. For Owens’ silvopasture planted in 1984, he started thinning 10 years after planting and continued every five years after that. The goal was to clearcut the stand 30 to 35 years (~2014) after establishment.

“The housing market has been low, so the price of timber is down [and we’re holding] onto the trees for now,” he says.

Silvopastures require more knowledge and more management than traditional systems. Beginning with a small parcel of property allows landowners an opportunity to monitor what is working in the system and what needs additional attention before trying it on a large scale. It’s difficult to offer a specific ratio of land and livestock to make a silvopasture work.

“Researchers are working on determining the economics of scale,” Straight says, “but we do know that trees plus livestock increases the profitability of the land compared to raising one single crop.”

Chedzoy believes that silvopasturing can be implemented at any scale if the principals are followed of adequate rest and recovery time in the silvopasture areas.

“Integrating silvopastures into our farm has improved the profitability of the land while also providing long-lasting environmental benefits,” Owens says.

Evans says that silvopasturing has been great for his land; it’s “one of the best-kept secrets!”