The leaves of the mimosa recoil at night and when disturbed as a mode of self-protection. 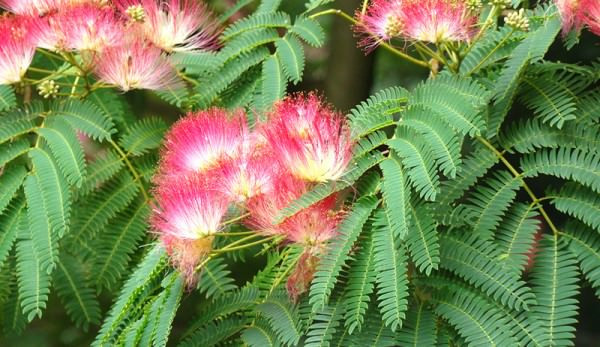 In my grammy’s backyard lived a tree that I swore, growing up, was straight out of a Dr. Seuss story. The leaves opened and closed mysteriously and in the summer there were large, fluffy tufts of pink perched at the end of the tree’s uplifted branches. It was the most otherworldly plant I had ever encountered.

Because it was so exotic, I had always assumed this was a tropical tree that my grandmother had someone managed to coax into growing against all odds. She did, after all, also have a cactus growing in her Midwestern front yard. As I moved into college I formed a judgement that I would rather grow native plants and I stepped farther away from her bizarre gardening knowledge.

Then just last year, while at an herbal conference, I was reintroduced to this plant of my childhood. Turns out that while not native, the mimosa tree (Albizia julibrissin) grows quite happily here in Ohio. Like several other Asian natives, it has a long history of use in Traditional Chinese Medicine, and it’s use is growing in western herbalism. As I thoughtfully chewed a piece of the peeled bark I found out why.

The bark and flowers are used, but it is the bark that is getting the attention here and now. It is mildly sedative. Chewing it can reduce your anxiety levels and leave you sitting under a tree in the shade, waxing eloquent about the shapes you see in the clouds drifting by. I can best describe it as providing you the ability to “chill.”

This plant in the bean (Fabaceae) family holds a deeper fascination for me as a botanist. I am disproportionately attracted to plants that move. They make me giggle and I have to know how they do what they do. The mimosa tree does a couple cool things. First, it emits chemicals into the surrounding soil that limits the growth of its neighbors. On the upside it also, like it’s other family relations, tends to fix nitrogen. This is good to keep in mind when placing it in a garden. It does not play well with others, so you won’t want to attempt a group of understory plants. It will need to be a specimen tree. Perhaps it’s a bit of an exhibitionist and doesn’t want any attention taken from it’s marvelous pink, plume-flowers.

The compound leaves of the mimosa collapse when it rains and when it is time to go to bed. The leaflets collapse in a miniature imitation of a stadium of fans doing the wave. Why would a plant need to evolve a mechanism to do this? In fact, in some instances, the leaves respond to touch as well. It is thought that this is an adaptation to protect the plant against overzealous browsing by an herbivore. If you were a hungry deer, you’d definitely be encouraged to move along if the plant shrank away from you in such an obvious fashion. The leaves fold up to resemble a thorn-like shape, so I think they seem less appetizing, as well.

The mechanism occurs as a result of the plant’s moving potassium around in its tissues, causing water to quickly leave the cell walls of its leaves. Turgidity is the manner in which a plant keeps the rigidity necessary to stand upright and hold its shape. The leaves collapsing is simply a loss of turgidity. What is fascinating about all of this is that the plant seems to be able to sense when it is safe to return the water to its cells. After you have backed away, the leaves will re-animate and return to their original state. Perhaps the whole business is an adaptation created to preserve water content. If I ate a large number of leaves the plant would lose water. If the leaves stayed open at night, the plant might lose here as well due to transpiration. The tree is well adapted to living in very dry, sandy conditions, so I think my theory might be correct.

I am planting a mimosa tree this year in a new sitting area we are developing off my classroom. I will remember my grammy and her attraction to the bizarre in the landscape. The bark and flowers will, I’m sure, make their way into many of my teas and it will be nice to have a plant that can encourage me to calm down enough to once again notice the shapes in the clouds.