Warm weather has arrived in Minnesota's Bluff Country. Temperatures have climbed above freezing and stayed there for several days now. It won't be long before my friend Harlan will start collecting sap from his maple trees. 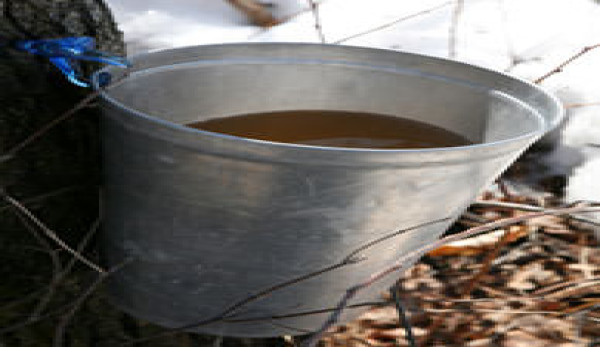 Warm weather has arrived in Minnesota’s Bluff Country. Temperatures have climbed above freezing and stayed there for several days now. It won’t be long before my friend Harlan will start collecting sap from his maple trees. It seems like such a great idea, gathering the sap, cooking it down and then enjoying the harvest throughout the rest of the year. Of course the reality is thatÂ maple syrup harvesting is a lot of work and requires a fair bit of knowledge and dedication.

Some people make a business out of it, harvesting thousands and tens of thousands of gallons of sap, reducing it to its sweet essence and bottling it for sale. I appreciate the effort they make when I enjoy their syrup on pancakes. Even more, I appreciate Harlan’s path. For him, sap gathering is a more personal task with a very personal rewards. Once, when asked if he gave any away, he responded that his mother always received a jar. The rest he and his wife would use as needed throughout the year.

It isn’t that Harlan isn’t a very generous person â€¦ he is. However, he doesn’t take more than he needs from his maples. When he taps a tree, he knows it can spare the sap. He is careful not to tap a tree that is too young or place too many taps in an older tree. He knows that when he is done, his trees will be as healthy and strong as they were when he started.

If only we all were as careful with what we ask from this earth. We might find that with a little work and some study, we could get what we need and still leave the world around us as healthy and strong as it was when we started. What a sweet life that would be!