The Tradition Of Making Sorghum

In Kentucky, the tradition of milling sweet sorghum and making it into a syrup runs just as deep as the crafting of bourbon. 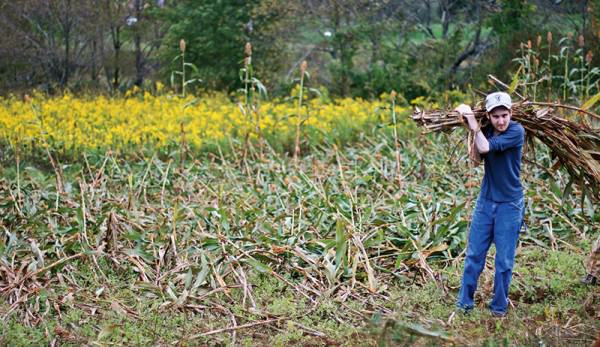 As a wave of gold sweeps over the Bluegrass State and cool air blows in, signaling the transition to fall, the people of Kentucky are looking forward to sorghum season. Much like bourbon, the stateãs other treasured product, the sweet molasses-like syrup is worked into just about any recipe Kentuckians can get their hands on, from the traditional butter-and-sorghum-topped cornbread to more exotic fare, such as sorghum-braised pork chops or sorghum-sweetened granola. However, even if some sorghum-based recipes fall out of fashion, the syrup itself never will because peopleãs fascination with and pride for this product is much more than a passing fad. Pressing the juice from the sweet sorghum cane and its long, slow transformation into the sticky amber sweetener has historically been about much more than making food; itãs been about making community.

In the 1800s, sorghum growers would pull their harvests together to mill the canes for juice, cooking down the green liquid much like sap for maple syrup. As modern sorghum makers try to revive this historic practice, theyãre blending in the same spirit of unity.

While visiting a small farm in western Kentucky, I witnessed neighbors gathering to carry on the sorghum-making tradition. A pile of the cane pulpãthe byproduct of the process once all the juice is squeezed outãstood piled near a horse-powered mill, a nod to the processors of generations past. Men young and old hovered over a nearby cooker, making sure the liquid didnãt scorch and ruin the entire batch.

The juice traditionally cooks down in a long, flat, open-air pan set atop a firebox or other heat source. Fans blow steam off the thickening juice, and you can taste the sweetness in the air. A designated skimmer uses a scoop-like tool to scrape off sediment that boils up to the surface and throws it away.

Rachael Dupree is the former managing editor for HobbyFarms.com. She grows food and medicine on her 50-acre farm near Lexington, Kentucky. When not out working her land, you can find her in her kitchen not following recipes, on her yoga mat in a satisfying pigeon pose, or exploring the worldãs nooks and crannies. Follow her on Instagram @rachael_dupree.