The Trailing of the Sheep

At festival, herding sheep through a small town in Idaho is only one facet of the three-day Trailing of the Sheep. 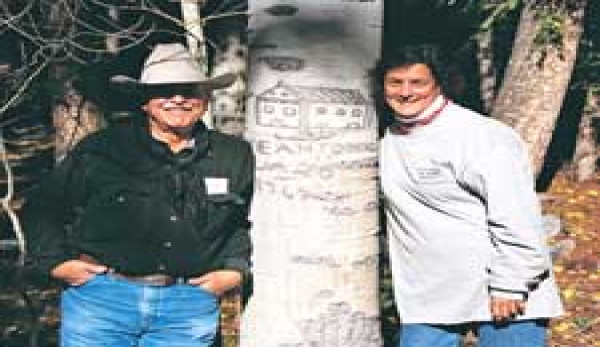 Every autumn a traditional event takes place in the Pacific Northwest that sends participants back in time, to an era before cars, before computers, even before electricity.

With the help of nearly 2,000 sheep, those who partake in this traditional event learn what it felt like to be alive hundreds of years ago, when men and women lived close to the land and relied on their animals for food, clothing and a way of life.

This event is The Trailing of the Sheep, a three-day festival held in the Sun Valley of Idaho every October since 1997.
ô
Celebrating the sheepherding history of central Idaho, The Trailing of the Sheep festival is made up of workshops, sheep dog trials, readings, music and, most notably, a walk through the town of Ketchum with hundreds of sheep headed from their summer home in the mountains to their winter grazing in the desert.

Located in central Idaho, the Wood River Valley sits at the edge of the Sawtooth and Challis National Forests, and is surrounded by the majestic Sawtooth Mountains known today for its appeal to skiers.
ô

The Sawtooths have long been the summer home for sheep in the Valley that provided a significant amount of the regionãs food and clothing in the mid-19th century. By the late 1860s, the area had a population of 14,000 sheep.
ô
By the late 1800s, sheepherding replaced mining as the foremost industry in Idaho, and the state hosted a population of no less than 614,000 sheep. In 1918, the sheep population in the state reached 2.6 million, making Idaho home to almost six times as many sheep as humans.

The town of Ketchum, now a resort town, was second only to Sydney, Australia, as the sheep capital of the world.

Good portions of sheepmen in the Wood River Valley were of Scottish descent, including James Laidlaw, a Scotsman who was one of the first successful sheep businessmen in the area.

Sheepmen of Basque origins were also plentiful in the region, having come to the area from northern Spain in search of gold. When they didnãt find their fortune in the hills and rivers of Idaho, they went back to a task they knew from their homeland: sheepherding.

Every fall for many years, the Basque shepherds guided their flocks from the plush meadows of the Sawtooth Mountains to the warmer desert lands below.

This annual event, which has been taking place since the late 1800s, is the inspiration for todayãs Trailing of the Sheep Festival.

Sheep in the Streets
Today, sheep are still part of the Sun Valley, though in vastly smaller numbers. Unlike 100 years ago, the sheep that now migrate down from the mountains to winter grazing lands number only 1,700.

However, the site of this flock walking through the town of Ketchum on a fall afternoon is still enough to inspire visitors from around the world to attend the event. Last yearãs festival hosted tourists from 36 states and six different countries.

Although the festival is celebrated in the fall, shepherds also move their sheep through the towns of Bellvue, Hailey and Ketchum every spring on their way up to higher elevations for summer grazing.
ô

In groups of 1,500, the sheep walk through the Wood River Valley, up Highway 75, through residential areas. They walk for a mile down Main Street in Ketchum, passing restaurants and stores on the way.
ô
A number of sheep continue farther up into the Sawtooth Mountains, where they spend the summer. In the fall, they return by the same route, to the delight of festival participants.

One of the most exciting aspects of the sheepãs entrance into town is festival attendeesã ability to participate in driving the animals.

Hundreds of people walk behind the sheep as they move through town in the Trailing of the Sheep Parade, each individual understanding for just a short while what itãs like to be a shepherd.
ô
Traffic stops, shopkeepers come out to watch, and everything at that moment revolves around the sheep.

The flock is led by a family that still keeps sheep in the valley today, and is followed by historic, horse-drawn sheep wagons, and musicians and dancers of Scottish and Basque descent.

Festival Inspires Fair, Tales, Workshop …
The passing of the sheep through town is clearly the highlight of the festival, but is by no means the only event. Activities are scheduled for three days, all designed to celebrate the history of sheep in the area as well as the ongoing importance of these animals in the community.

The Trailing of the Sheep weekend is host to many events, including:

Other Town Activities
The special events held in conjunction with The Trailing of the Sheep are not the only activities in Ketchum and Hailey.

By celebrating these cultures along with the history of sheep in the Gem State, Idahoans and all that attend this event keep the spirit of a glorious and bygone era alive.