As you start planning for the spring garden, don’t leave out this peppery vegetable that can be grown for the root and the greens. 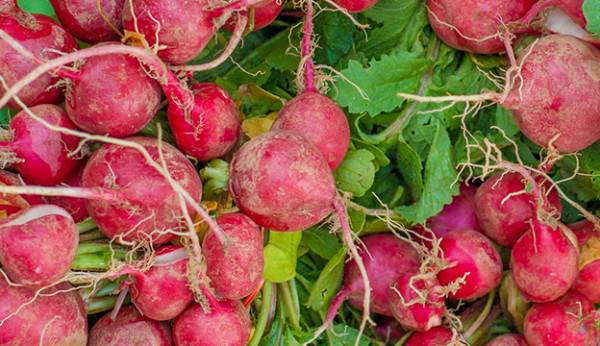 The radish is often relegated to the role of a garnish, commonly carved as a decorative flower sitting all alone on the edge of a serving tray or occasionally adding a slice of color to store-bought salad mixes. This is a sad state of affairs for a delicious vegetable that can be eaten raw or added to any number of roasted or stir-fried dishes, where its distinctive peppery flavor can shine. Also overlooked are the radish greens themselves, which are not just edible but a flavorful side dish when sautéed with a little garlic.

Radishes cultivars are quite diverse and come in a wide array of shapes, sizes and colors that can be grown in the spring, summer or winter. There are even varieties that are sold as leaf radishes for all the radish green lovers out there.

With few major pests, radishes are a relatively simple crop to grow. From seed, most radish varieties will mature in three to five weeks depending on climatic conditions and the specific cultivar (excluding winter radishes). Warmer conditions will lead to faster radish maturation. However, when you plant can make a big difference in radish flavor. Cooler temperatures tend to produce a milder flavor in radishes while periods of heat will help develop a spicy strong radish flavor.

Radishes do well in gardens that feature sandy or sandy loam soils with good drainage. Sow seeds in an area that receives at least six hours of direct sunlight for a successful radish harvest. Radishes can be planted in rows at a depth of a 1/4 to 1/2 inch. Once sprouted, radishes should be thinned down to 2 or 3 inches between plants (winter radish cultivars will need at least 4 or 5 inches apart). Spring radishes varieties are a great early crop and can be planted when soil temperatures go above 40 degrees F, which is usually three or four weeks before the frost-free date in most regions.

Because of their quick germination rates, an old garden trick was often to sow some radish seeds in with other crops so that the plant rows could be marked with speedy young radishes sprouts. The radishes could then either be pulled out when the main crop sprouted or thinned and let grow to maturity alongside the other vegetables over the course of several weeks.