The Open-Pollinated Vegetables Of Tomorrow

Plant breeders work with our favorite open-pollinated vegetables to create varieties that are easier to grow and more interesting to look at. 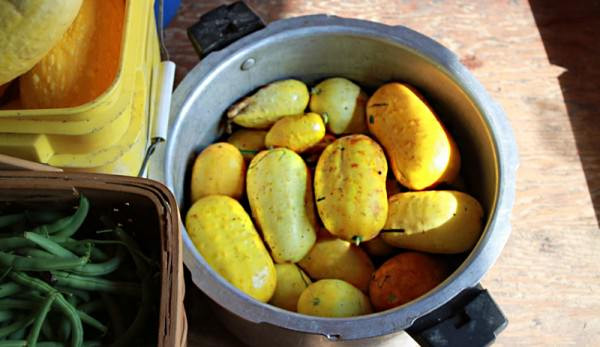 We all love open-pollinated and heirloom vegetables, but sometimes the allure of those varieties is tempered by the real-life disadvantages that sometimes crop upâ€”pun intended. But what if we could have all the advantages of open-pollinated vegetables along with other positive attributes, such as disease resistance, improved quality and increased productivity? Thanks to the efforts of dedicated plant researchers and breeders, new open-pollinated varieties are here to stay, and theyâ€™re ready to become the heirloom varieties of tomorrow.

â€śItâ€™s definitely a good time to be in vegetable breeding,â€ť says Jim Myers, professor of vegetable breeding and genetics at Oregon State University. â€śGenerally, there has been a decline in funding for public plant breeding, but some of the newer federal funding sourcesâ€”USDA Organic Agriculture Research and Extension Initiative, for exampleâ€”are funding our work so that we can continue developing new open-pollinated vegetable varieties.â€ť

The popular Boothbyâ€™s Blonde heirloom cucumber variety is well-loved for its flavor, stunning white coloring and impressive productivity. But Boothbyâ€™s Blonde, like many other cucumber varieties, has an Achillesâ€™ heel: a propensity to develop powdery mildew. Over the past decade, researchers at Cornell University have worked to develop new and improved varieties of open-pollinated cucumbers that are bred for resistance to powdery mildew.

According to Michael Mazourek, assistant professor of plant breeding at Cornell, the seed of the idea to explore new cucumber varieties came out of a meeting between growers and researchers. â€śThe growers were identifying heirlooms that they liked but [that] were susceptible to diseases that make them challenging to grow,â€ť he says.

And thatâ€™s where Boothbyâ€™s Blonde came in: They decided to cross it with the Marketmore slicing cucumberâ€”a variety noted for its resistance to powdery mildew.

â€śThe process starts with identifying the parents of the new crop with complementary characteristics,â€ť Mazourek says.

From this project of crossing Boothbyâ€™s Blonde with Marketmore, the team at Cornell has achieved several new open-pollinated cucumber varieties that exhibit mildew resistance.

Michael Glos, a farmer and breeder, chose the cucumber that ended up being Silver Slicer (a Marketmore-type cucumber with white skin). Jason Cavatorta, a graduate student, chose Salt and Pepper, which has the size and black spines of Boothbyâ€™s. George Moriarty, another researcher, chose Platinum, which was an intermediate size with additional virus resistance. Mazourek and student Bill Holdsworth have also developed a downy mildew-resistant cucumber called DMR-264, now available from Commonwealth Seeds.

Mazourek and the team at Cornell have also developed the downy mildew-resistant Trifecta melon and the powdery mildew-resistant Honeynut squashâ€”further expanding the availability of plants with mildew resistance for farmers and gardeners.

Meanwhile, in the tomato world, things are getting more exciting all the time. Weâ€™re not just seeing stereotypical red tomatoes, either; the new varieties boast a wide range of colors and patterns. Brad Gates of Wild Boar Farms in Californiaâ€™s Napa Valley is focusing on bicolor and striped varieties, while researchers at Oregon State University released the stunning indigo-colored Indigo Rose tomato in 2012.

â€śIndigo Rose came out of experiments to increase phytonutrients in tomato,â€ť Myers says. â€ś[In the year 2000] we were working with carotenoids (the red, orange and yellow pigments in tomato) and noticed that in a germplasm repository, there were some tomato lines with a little bit of a purple blush on the fruit.â€ť

According to Myers, this was the first time anyone had characterized these tomato lines for this purple pigment, and they were able to verify that these were anthocyaninsâ€”antioxidants associated with blue and purple coloring, such as those found in blueberries.

â€śThe amount expressed on the fruit was disappointingly low, and there were several of these lines in the collection, so we started intercrossing them and found that one particular combination dramatically increased the amount of anthocyanins visible on the fruit,â€ť Myers says. â€śIt was out of these crosses that Indigo Rose was developed.â€ť

But Indigo Rose is just the beginning. â€śWe do have newer varieties coming along that improve on Indigo Rose,â€ť Myers says. â€śTwo such are Indigo Cherry Drops and Indigo Pear Drops, which are earlier and have better flavor.â€ť

According to Myers, Oregon State University is also working on several new open-pollinated
varieties, including â€śan open-pollinated broccoli variety, a snap and a snow pea, and a mild habanero pepper (not to mention more Indigo tomato varieties).â€ť My garden awaits!

This article originally appeared in the July/August 2015 issue of Hobby Farms.