The Wisdom of Women Farmers, Part 1: Thoughts on Love

Five women farmers over 50 share insight about their experiences in life and agriculture. In this first segment, the topic is love. 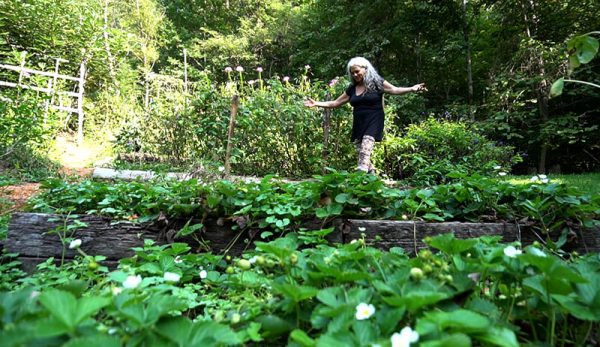 What does it mean to be a woman farmer? Considering that women have contributed a great deal to American farm life, what insight can they share? In this series, I‚Äôll convey the observations and feelings of women farmers who’ve earned wisdom through five or more decades of life, at least some of that time spent as farmers. Five elders share their memories, dreams, practical advice and personal perspectives on what it takes to thrive in a farm-based lifestyle, one that is healthy, rewarding and contributes to the community.

Life on a farm means facing the realities of love, money and death on a daily basis. The first one‚Äîlove‚Äîstands out as a reason these women have traveled the rough, unpaved path. In some cases, romantic love has played a part in realizing their farm dreams, often in surprising ways. In all cases, a profound love of working with the land has shaped their choices, with or without supportive partners in the picture. We start with a woman who received love and encouragement from many sources.

Jane O’Tiernan lives near Richmond, Kentucky. She is a flower farmer, market organizer and small-farm advocate. Her property is in a floodplain, with around 3.5 acres in production. She has high tunnels and grows cut flowers and a few types of vegetables for the market. She has been a beneficiary of the Kentucky State University’s small farms programs, and she teaches workshops there occasionally. She has a degree in mathematics, and she taught for a while. To support her farm life, she has also worked in locally owned restaurants for several decades. She was a social worker in the era of “government cheese,” and still works intermittently for the U.S. Census Bureau.

Jane loved teaching her children how to grow their own food as well as raise flowers and sell them at the market. To keep this love in the forefront as she raised her kids alone, Jane had to work three jobs to make ends meet, and those jobs had to be flexible enough to allow for her dedication to the farmers market. She cares deeply about the community of mentors and proteg√©s around her. Jane can barely answer a question about her growth without mentioning those she admires and what she has learned from them.

Now in her 70s, Jane continues to lead the Saturday market with vigor. She also teaches workshops on growing cut flowers for market. She loves putting smiles on others‚Äô faces, and she has been known to give away bouquets just to cheer up someone. When I asked her what she enjoyed about working with food, she answered, ‚ÄúI just like to watch things grow, whether it‚Äôs plants or kids. I was also a foster parent for a dozen kids. So you watch kids grow there too.‚Äù

Susan Harkins lives near Lexington, Kentucky. She is a research farmer and restaurateur, and she has experimented with value-added products including shrimp, honey and cider. She lives on what once was her grandfather’s horse and tobacco farm, 35 acres of bluegrass region farmland. She has worked intentionally to improve the water management on her property. This led her to exploring aquaculture. She was assisted by Kentucky State University in researching the market viability. She has an organic apple orchard as well as ponds for tilapia, shrimp and trout. She leases land for cattle grazing and hay production.

Susan followed her heart to the beauty of fresh food and found an abiding joy in staying connected to the earth. Her relationships with men who were horse breeders and tobacco farmers, including her father, gave her insights into farm business that equipped her to take the lead in the realm she was passionate about: the organic movement.

In Kentucky in the 1980s, organic agriculture was seen as a fad. Susan researched other states‚Äô regulations and brought the idea to boards full of conventional agriculture businessmen. With support from family farms, eventually the movement caught on. Susan has hung up her activist hat, for now. She simply enjoys raising bees and making cider with friends.

‚ÄúNow the [U.S. Department of Agriculture] has certified organic regs, for meat and fruits and vegetables, and they‚Äôre working on it for aquaculture. They‚Äôre getting there,‚Äù Susan says. Stepping back is easier knowing that, ‚ÄúI don‚Äôt have to carry the torch anymore. It‚Äôs being carried by so many.‚Äù

Susana Lein lives near Berea, Kentucky. She is a permaculture workshop teacher and an off-the-grid farmer specializing in heirloom variety corn and beans. She is somewhat legendary in the permaculture world, especially among women farmers in Kentucky. Her land is in the Appalachian foothills. It was barren of topsoil when she and a group of friends bought around 100 acres 20 years ago. She has built up the rich and productive soil. Her farm is a model of self-sufficiency. Hundreds of interns, apprentices and workshop students have learned practical applications of permaculture theories from her.

Susana’s love for the land and what it provides shows in every aspect of her off-grid permaculture farm. It‚Äôs evident that she cherishes her pivotal life experiences in Guatemala, where Mayan farmers taught her to select and save seeds for staple crops such as corn and beans. Her hands pick each kernel while her heart and mind weighs the value of the potential held inside.

Susana carries on the traditional reverence for the gifts of corn with her annual harvest party each fall, and she translates her love of natural farming into practical workshops in permaculture. Susana’s practices emulate the respectful approach that the Mayan farmers taught her, and she passes it on.

‚ÄúThey learned, and were so wise, by doing,” she says. “We have gotten to be so different from that. But I think that in the end, we all have that in us, we just have to get back to it.‚Äù

Pamla Wood lives near Harrodsburg, Kentucky, and started farming around age 50. She bought her hobby farm upon her retirement. She has a degree in agriculture and worked in environmental protection. She and her partner live on 40 acres of rolling hills. It took a few years to figure out what she wanted to raise. She started with goats, then added sheep along with a few chickens. She has become a fiber artist, involved with a local spinners group, and is also passionate about modern dance, which she practices almost daily to keep herself fit.

Pamla shared her perspective on the facets of love that brought her into a farm/life/love relationship that began when she retired from her career as an environmental scientist. Although she had advised farmers about soil, it was a different experience to ask herself and her partner what they really wanted to do on their own farm. She admits that she didn‚Äôt even think to check out the soil before buying her farm, because she simply fell in love with the place. Later, she and her partner, Steve, figured out what they could do with the land.

At the prompting of a business workshop leader, they asked each other what dreams had they had.

‚ÄúSo I asked Steve, and he said he wanted to interact with the land,‚Äù Pamla recalls.

She knew she wanted to improve the wildlife habitat and also become somewhat self-sufficient.

‚ÄúIf you‚Äôre gonna live on the land,” Pamla says, “you ought to use it, make it productive.‚Äù

With more reflection, Pamla remembered that she‚Äôd originally wanted to raise sheep when she was in agricultural college but was discouraged because sheep weren‚Äôt ‚Äúin‚Äù at the time. It turned out her soils and topography were ideally suited for small livestock, and she now has her own small flock.

Jane Post lives near Berea, Kentucky, with her husband, Tim Hensley. She is a homesteader, wildcrafter, permaculture gardener and workshop leader. She and Tim live on a mostly wooded, sloping piece of land, where they have recently built an off-the-grid home. They also sustainably harvested timber from their forest with horse power.

Jane and Tim are well-loved local food leaders in their community, having organized multi-farm community-supported agriculture operations, or CSAs, that have evolved in scale over the years. Their workshops include wild mushroom foraging, gourmet mushroom cultivation and edible wild food foraging. You can visit their website here.

Jane and Tim are a model of a sound partnership. They‚Äôve been able to balance the dynamics of hosting workshops at their homestead with retaining the privacy they need to enjoy the solitude of their wooded land. Tim is the organizer, bookkeeper and workshop leader, while Jane is the gardener, dreamer and creative designer. Her passion for health provided a good income until a few years ago, when she retired from massage therapy. Now, her love of working with her hands has turned to caring for their abundant permaculture garden and cooking gourmet meals for workshop participants.

Jane and Tim joke about the roles they share: He splits the wood and she washes his laundry.

Tim quickly defends the importance of taking his turn in the kitchen: ‚ÄúI‚Äôve found, in my life, that the more able and willing I am to do dishes, the better I eat.‚Äù

Each wise woman has followed her own path guided by love. None of their journeys has been straight and narrow. Unconventional, curvy paths require courage, leaps of faith and open hearts to navigate. For each of these elders, loving what they do keeps them young at heart.