As the range of this caterpillar expands north, your favorite crops could be at risk. 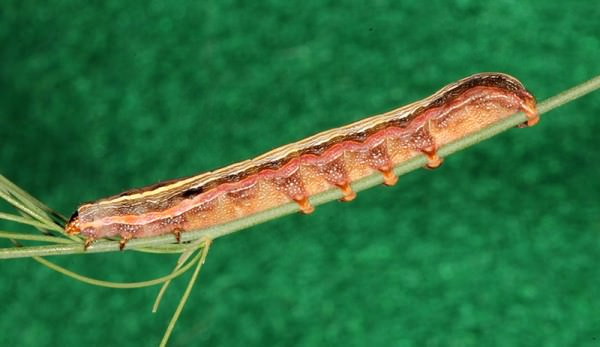 Typically only considered a pest in the southern and eastern United States, the yellowstriped armyworm (Spodoptera ornithogalli) may now be on the move north and west. This insect pest is native to North America, but its overwintering range is likely expanding due to global warming. As this insect appears in greater numbers outside its traditional territory, it is time for gardeners to take start taking notice of this particular armyworm.

Worthy Of Its Name

While there are several armyworm caterpillars that are considered pests, the yellow striped armyworm has a unique appearance. The larva form of this moth has a dark coloration, ranging from gray to black, and, as the name suggests, has a pair of longitudinal orange- to yellow-colored stripes running along the sides. The face of this specific armyworm species sports a visible white marking in the shape of an upside down V or Y. The adult moths have a rather mundane brown wingspan that can reach 1Â˝ inches and features a series of complex white markings, giving them good earth-toned camouflage.

Armyworms get their name from their gregarious appetites: The young larva that gather around a food source, devour the vegetation, and then move together to the next suitable plant. The yellowstriped armyworm is no different, targeting a wide range of crops, including asparagus, beans, cabbages, corn, cucumbers, peas and tomatoes. While typically focusing on the foliage of these plants, the yellowstriped armyworm will also consume some fruits and seems to be especially fond of ripening tomatoes.

Stop The Yellowstriped Armyworm In Its Tracks

At the limits of their geographic range, yellowstriped armyworms tend not be a major pest because their population is not densely concentrated as they are in the Southeast, so they likely will not require any treatment aside from handpicking. Luckily for organic gardeners, many native beneficial insects, including several species of parasitic wasps, help keep the armyworm populations in check. In areas where armyworms are common, gardeners and farmers need to proactively treat armyworm infestations that occur. The most reliable organic treatment are products with the active ingredient Bt (Bacillus thuringiensis), which is most effectively applied when the youngest armyworm instars appear.