In Scandinavian countries (and some communities stateside), the holiday season doesn't really start until the Yule goat makes an appearance. 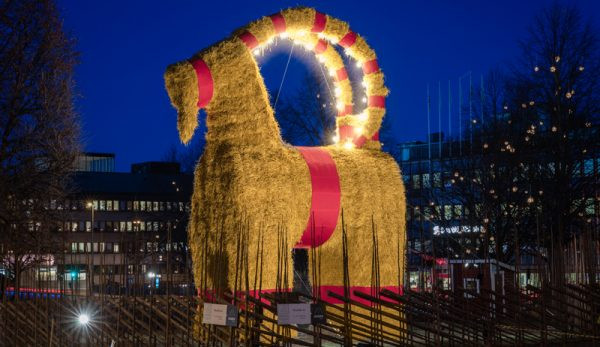 The White House Christmas tree and tree-trimming tradition mark the start of the U.S.â€™s long-anticipated holiday season. But in the other side of the world, Scandinavian countries (including Sweden, Norway and Finland) ring in the holiday season with an equally anticipated annual traditionâ€”the building of the GĂ¤vle Goat in Sweden.

The plaited straw Yule Goat trimmed with red ribbons comes in all sizes, from palm-sized ornaments to the gigantic 42.6 tall, 3.6 ton GĂ¤vle Goat.

Construction of the GĂ¤vle Goat begins on the first day of Advent and takes 1,000 man hours to complete. The materials are as impressive as the labor needed to build it.

On average the cityâ€™s tourism board says the GĂ¤vle Goat requires:

Read more: Still wondering what to get the farmer in your life? Here are some ideas!

The tradition started in 1966, according to GĂ¤vleâ€™s tourism board.

Stig GavlĂ©n had a marketing ideaâ€”a supersized version of the beloved figure-sized Yule goat could be built to attract customers to the area shops and restaurants. It worked locally and has gained world-wide renown, attracting 42,000 visitors in 2015 alone.

The intent is to leave the goat on display until New Yearâ€™s Day. But watching to see if the goat lasts until New Years has become an integral part of the ritual.

To date, it has been hit by a car, run through with a stake and suffered several fires. Kidnappings have also been planned. To date, only about half of GĂ¤vle Goats built since 1966 have survived the entire holiday season.

Much of the Yule goatâ€™s origin has been lost in time. It is tied to the ancient pagan festivals that celebrated the Norse god Thor, who traveled by flying chariot pulled by two goatsâ€”Tanngrisnir (Gap-Tooth) and TanngnjĂłstr (Tooth-Grinder).

The chariot delivered food for the god and his friends. Thor repeatedly slaughtered and ate the goats (they were returned to life the next morning).

In ancient midwinter celebrations, a man dressed in goatskins and wearing a mask to portray Tanngrisnir and TanngnjĂłstr visited houses in Sweden and was symbolically killed but returned to life, exactly as the sun does at Yule.

Christian fathers disapproved of the pagan merriment and branded the (â€śYule goatâ€ť) a demon.

Swedish records dating to the 17th century depict a gloomier version of the Yule goatâ€”one that visited houses to steal food and play pranks. Over time he evolved into a compassionate figure and gave gifts rather than claiming them.

Another theory is that it was once affiliated with Indo-European harvest celebrations. According to the Carnegie Museum of Natural History, â€ś The last sheaf of grain bundled was believed to contain the spirit of the harvest and was saved for Yule celebrationsâ€”many early European customs included harvest gods that looked like goats. Farmers often referred to their bundles as goats because of the resemblance.â€ť

Read more: These three recipes for holiday treats will help you share the holidays with your chickens!

Regardless of its beginnings and evolution through time, the Yule goat has become a permanent representation of the annual holiday festivities around the world.

And through the exchange of cultural traditions, the Yule goat has even made its way to the U.S.

A smaller-scale version of the GĂ¤vle Goat has sporadically appeared in small Wisconsin communities since the mid-1800s. The Old World Wisconsin outdoor museum built and featured Yule goats in at least two of its annual events.

Want to get involved with the custom? Itâ€™s also possible to build your own Yule goat. Instructional videos on YouTube offer tips for building a skeleton, weaving straw and constructing a replica (size of your choosing) on your farm.