You Should Consider Adding Chickens In The Fall

It's most common for chicken-keepers to add chicks in the spring, but adding fall flocks of chickens can bring a number of advantages. 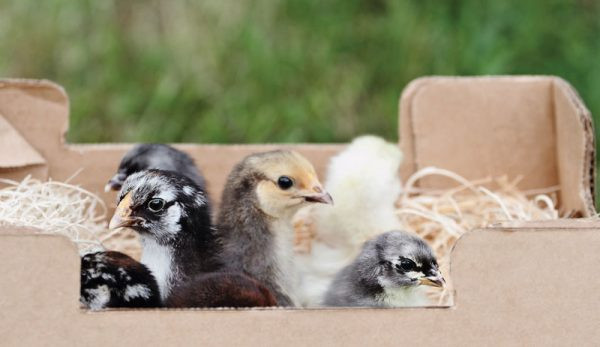 Springtime is synonymous with babies. As temperatures rise, days get longer and animals get frisky. Broody hens spend more time sitting on their eggs and cheeping chicks start showing up in feed-
supply stores. Itās no surprise that spring is also the season when most people start their flocks. But a growing number of chicken-keepers are adding fall flocks to their farms.

āSpring is such a popular time, but more people are experimenting with fall flocks,ā says Kendra Higgins, director of marketing for Meyer Hatchery and host of The Coop Podcast.

Are you thinking about adding (more) chickens? You donāt have to wait until spring. Consider these six reasons to start a fall flock.

Chicks are hard to resist. The same downy feathers, tiny beaks and little cheeps that make chicks Instagram sensations may also tug at your heartstrings.

And adding a fall flock means all of that cuteness isnāt limited to a single season. You can cuddle chicks and watch them grow twice a year.Ā

Is your heart set on a Buff Orpington, Rhode Island Red or Australorp? Do you want chickens that lay blue, green or pink eggs? You might be out of luck in the springtime.

Higgins notes that certain breeds (or breeds that produce certain egg colors) are most in demand in the spring when every established flock-raiser and wannabe chicken-keeper calls in their orders to hatcheries.Ā

Demand has been especially high during the pandemic, making it even more difficult to order spring chicks. Fall ordering is less frenzied.

āHatcheries get swamped and run out of a lot of breeds,ā says Lisa Steele, creator of the website Fresh Eggs Daily and author of Fresh Eggs Daily: Raising Happy, Healthy Chickens Naturally. āHatcheries realized if they started opening up to fall ordering, people who couldnāt get the breeds they wanted in the spring ā¦ had a better chance of getting them in the fall.ā

A better selection of breeds could lead to some unfortunate āchicken mathā and a flock that isnāt the right fit for your farm or family.

āIn the fall, if youāre finding availability, it can be even more exciting,ā Higgins says. āMake sure youāre asking questions about whether itās a breed you really want. Is it a breed thatās also family-friendly? Is it a breed that lays the color of eggs [you want]? Or even the number of eggs …? Is that a breed that youāre going to like?

“Asking all of those questions and really factoring in what works best for you will make you a lot happier with the flock that you end up with.ā

It’s true that there might be fewer people clamoring to order cheeping chicks in the fall. But less demand also means hatcheries are hatching smaller number of chicks, so selection isnāt guaranteed.

Illness and predators mean flock numbers can tend to fluctuate. And some of the chicks you ordered in the spring may not be part of the flock by fall.

New chicken-keepers are often surprised at the number of predators in their yards. They might underestimate the need for a super secure coop to protect their hens, which leads to unexpected losses.Ā

Those who purchased just a few birds might find themselves down to a single hen at the end of the season. But you don’t have to make a lone remaining hen wait until next spring to be part of a flock again.

Ordering chicks in the fall helps rebuild the flock.

Adding to the flock in the fall is also common among those who sell eggs for local markets and need a certain number of hens in their flocks to keep up with demand.Ā

Read more: Adding chickens to the flock? Make sure you set up a quarantine coop.

Next spring, when other flock-raisers just setting up their brooders and welcoming new chicks to the farm, the chicks you purchased in the fall will already be laying eggs.

You might also get more eggs from fall-hatched chicks. The reason: Chicks purchased in the spring donāt start laying until the fall. Just as their reproductive systems kick into high gear, the days get shorter. This sends the signal that itās time to slow down egg production through the winter.

In contrast, chicks hatched in the fall shift into maximum production in the spring, laying almost one egg per day (depending on the breed).

āIf you get [chicks] in the fall, they are maturing through the early part of the winter and might put off laying a little bit longer. But when they start laying in the spring, the prime laying season, they are going to be ready to go,ā Steele says.Ā

Higgins adds that adding chicks in the fall could also prevent you from keeping the coop lit for sustained egg production.Ā

āFor those that donāt like to keep the lights on in their coop to try to force the chickens into continuous laying, if you like that natural slowdown, staggering your new additions in your flock by adding some [chicks] in the spring and some in the fall typically will get you year-round production without the added light source,ā she says.

Every year, chickens shed their old feathers and grow new ones. Breed and age determine molting patterns, but biology plays a role, too. Chickens only molt after laying a certain number of eggs. (This prevents molting from robbing hens of the energy needed for egg production).Ā

Fall flocks start laying full force in the spring. But they might not molt until the following year, skipping the midsummer pause in laying to accommodate molting. This is common for spring-hatched chicks.Ā

While there are compelling reasons to add chicks to the flockāor start a new flockāin the fall, a late-season flock requires a few special considerations.

Read more: What’s going on when chickens molt? Here are some answers.

In the fall, the hatchery ships chicks with heat packs and, depending on temperatures, may add an extra layer of foam to the boxes for added warmth.

Cooler temperatures in the fall may also mean that chickens need to stay in their brooder for longer periods, especially in states with harsher climates. This is one of the biggest reasons Steele, who raises chickens in Maine, prefers spring chicks to fall flocks.Ā

Choose breeds such as Golden Comets, Rhode Island Reds and Delawares that mature at 16 to 20 weeks old rather than slower growing breeds such as the Brahma that might not mature (and be ready for cool temperatures) until they are 24 weeks old.Ā

Integrating fall-hatched chicks into existing flocks can also be a little more difficult in the fall.

āIn the summer, we typically recommend putting chicks outside with a divider [between the new chicks and the existing flock]. Or, if you have a small flock, you could even use a dog crate so the two flocks can see each other but canāt reach each other,ā Higgins says. āYouāll still want to do that in the winter. But sometimes your coop size can deter just how much freedom you have in that setup.ā

Because there are additional considerations associated with establishing a flock in the fall, Steele believes these late season additions may not be right for novice flock raisers. āThe more experience you have raising chickens, the easier itāll be to raise a fall flock,ā she says.

Remember, chicks arenāt the only option for fall flocks. You can also consider adding flocks of ducklings and goslings during this season. Ducklings and goslings are hardier than chicks, more cold-tolerant and feather out faster. These traits make them well-suited to going from the brooder to the coop in cooler weather.Ā

Will you add chicks in the spring or fallāor both? Whatever you decide,Ā  youāll benefit from adorable babies, feathered friends and amazing eggs.Ā

There are no scientific studies comparing how eggs sizes differ between spring-and fall-hatched flocks. But Lisa Steele cites anecdotal evidence that fall flocks might have an edge.

āFall chicks tend not to lay those little fairy eggs [because] they wait a little bit longer to start laying,ā she says. āInstead of waiting until 18 or 20 weeks to start laying, it might be 24 weeks or 26 weeks so theyāll start off laying full-sized eggs.ā