There Are Numerous Reasons To Consider Getting Goats

Whether it's for milk, fiber, work or companionship, there are plenty of reasons to share your land and life with some goats. 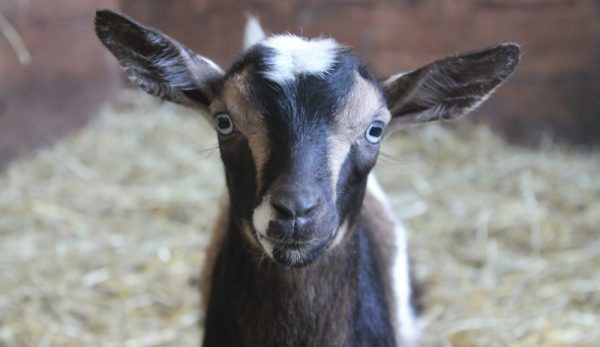 My love affair with goats began because of one simple thing: goat cheese. It was love at first bite when I first tried the creamy, tangy spread in college. For almost two decades, it was an infrequent treat because of the high price tag of a dollar an ounce. (That was back in the 1990s!)

When my family decided to move to the country to grow our own food organically in 2002, I knew I had to have a couple of goats so that goat cheese could become part of my regular diet.

The cheese that most of us refer to as ‚Äúgoat cheese‚Äù is more correctly called ch√©vre (pronounced like shev). And although you can use goat milk to make yogurt and a lot of cheeses traditionally made with cow milk, there is no other milk that makes cheese that tastes like ch√©vre.

One of the reasons many people choose goats over cows as their personal family milkers is because of goats‚Äô smaller size. This is especially attractive if they have no experience handling livestock.

The smallest cows weigh 700 pounds, which means they outweigh any human. This makes them challenging and sometimes dangerous for a novice to handle.

‚ÄúMy husband and I chose to have goats on our farm mainly for their milk and the products that are made from it: milk for drinking and cooking, cheese and soap,‚Äù says Kellie Pavlov of Eatonville, Washington.

‚ÄúWe just started our very first goat herd and farm a little over six months ago, after never having grown up on one and moving from the desert of Las Vegas [Nevada] to the forests of the Pacific Northwest.

‚ÄúOther reasons why we chose goats (after much research) especially the Nigerian Dwarf and Kinder breeds, are their smaller size along with the high butterfat content of their milk. We didn‚Äôt want to deal with larger livestock animals like dairy cows.‚Äù

Dairy goats can range in size from a 60-pound Nigerian Dwarf doe (female goat) up to Saanens and Alpines, which weigh closer to 150 pounds. Due to its small size, the Nigerian Dwarf‚Äôs popularity has grown rapidly in recent years.

Cheese is one of the main reasons goats appeal to people who want cheese. The high butterfat of their milk means a much higher cheese yield than the larger breeds, which have half as much butterfat.

‚ÄúI have always wanted to own a milking cow,‚Äù says Jenny Mansheim of Fort Madison, Iowa. ‚ÄúBy the time I could afford a milking animal, I was a grandma with grandchildren. I knew cows could kick or injure them because of their size. So I researched, and the Nigerian Dwarf milking goat was a perfect fit.‚Äù 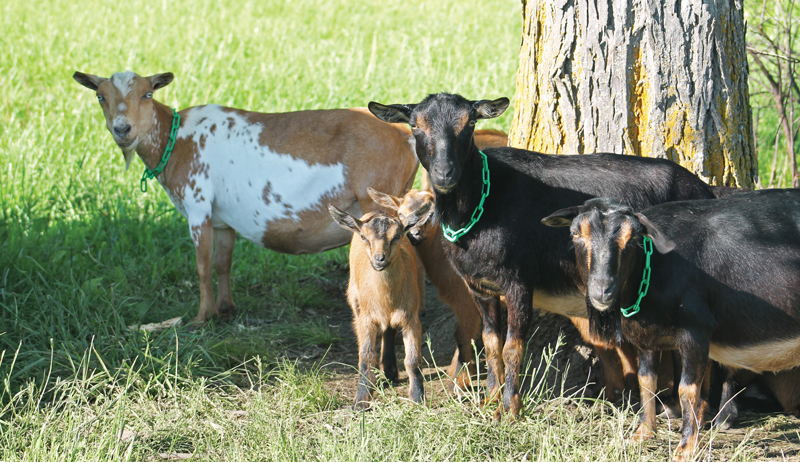 Some people choose goats because they are allergic to cow milk. If you have a true lactose intolerance, you would have a reaction to any mammal‚Äôs milk because they all have lactose.

However, a milk allergy is a problem with the protein, and that varies from species to species. So, many people who are allergic to cow milk can drink goat milk without a problem.

Some people may prefer goat milk because the milk doesn‚Äôt separate like cow milk. Although some sources say that goat milk is naturally homogenized, it‚Äôs not really. It just takes many days to separate, whereas cow milk separates within a few hours.

On the down side, this means that it is more challenging to make butter from because you can‚Äôt skim as much cream off the top of the milk. But you can buy a cream separator if you want to make butter regularly.

It’s true that all goats produce milk. But if you want to make cheese and drink milk regularly, you should get one of the dairy goat breeds to avoid disappointment.

It‚Äôs also best to buy from a breeder who milks their goats. If someone is keeping goats for pets, they really have no idea what that goat‚Äôs milking potential is.

According to the latest census from the USDA, more than 80 percent of the 2.5 million goats raised in the U.S. are raised for meat.

For years, I said I could never eat a goat. They seemed too much like pet dogs to me.

But then we wound up with more wethers (castrated male goats) than we could sell as pets. Eventually, we came to the realization that we would need to eat some of them. That‚Äôs when I discovered that I love goat meat.

Today, we raise some goats for meat to stock our freezer every year.

The U.S. is probably the last country in the world to discover goat meat. It‚Äôs actually much more popular than beef in many parts of South America, Africa and Asia. It‚Äôs especially delicious in curry dishes.

And unlike so many other things that are delicious, goat meat is actually good for you, too. Goat meat has less fat, saturated fat, cholesterol and calories than beef, pork, lamb or even chicken.

When you say the phrase ‚Äúmeat goat,‚Äù most people immediately think of the biggest goats, such as Boers and Kikos. However, you can eat any goat. In fact, dairy goat breeders routinely butcher most of their males.

You only need one buck (intact male goat) for a dozen or more does, meaning that a lot of males don‚Äôt need to stay males.

Some people try to sell their whethers as brush eaters or pets. But if some are still on the farm in the fall, they usually wind up going to the locker for processing. It‚Äôs not worth it financially to feed them hay over the winter.

Read more: Here’s everything you need to know to start keeping fiber goats.

Although cashmere has to be separated from the guard hairs in a goat‚Äôs coat, mohair is sheared from angora goats two or three times a year. In fact, Mea Stone, president of the Colored Angora Goat Breeders of America, says that they are the most efficient fiber producers in the world for their size, with adults growing about an inch of fiber per month and producing 10 to 20 pounds per year, depending upon age.

Fiber is one of the main reasons Stone choose to keep goats.

‚ÄúI was diagnosed with [multiple sclerosis] in 2006 and always wanted a farm with goats,‚Äù she says. ‚ÄúMy husband said we had better do it now, and so we did. And my MS has not progressed, which is why I call my goats my herd of therapists.

“They keep me healthy by making me go outside every day and look after them.‚Äù

Stone was not a fiber artist when they bought the goats, but she has learned to spin, crochet, weave and needle felt. Although she has tried a variety of other fibers, mohair remains her favorite.

Angora goats are easy to handle due to their mellow nature and small size. Does average about 70 pounds, with bucks reaching about 120.

Although a lot of people think that a goat might make a good lawnmower, they actually prefer bushes and small trees. So they do a much better job of clearing brush. To people such as Pavlov, that‚Äôs one of the best reasons to have goats.

‚ÄúIt is great that our goats also clear brush and blackberry brambles and other undesirable things like that on our property while also fertilizing the pasture,‚Äù she says.

Goat landscaping companies have also sprung up across the country to clear areas that are inaccessible or too dangerous for humans and heavy equipment to clear. Google, Yahoo and Arlington National Cemetery, as well as airports in Chicago and Seattle, have hired goats to clear land.

In fact, goat landscaping has become so popular that there are now consultants who will help you start your own business. If you prefer a turnkey business, you can even buy a goat landscaping franchise. 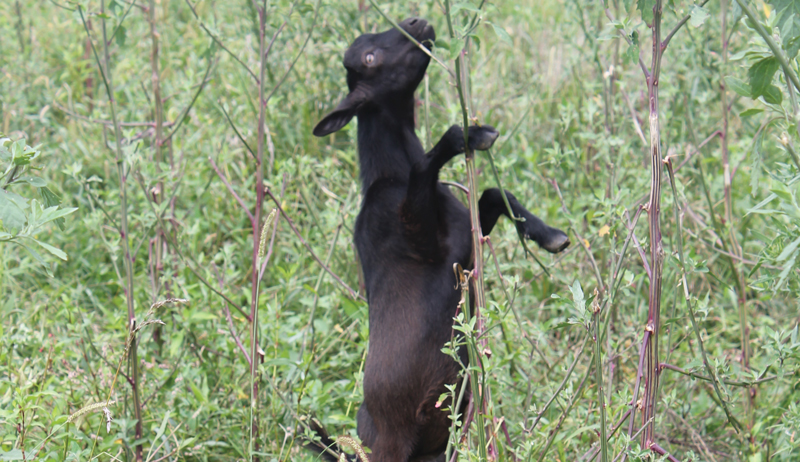 Although we don‚Äôt need animals for packing and driving like we did a century ago, some goat owners still teach these skills to their goats for fun or profit. Some people just enjoy having their goats pull a cart in a parade or at a fair. Others have made a business out of taking pack goats and tourists along mountain trails and other natural areas.

Other than the cuteness factor, goats may be a good choice for these activities because they are smaller and safer than horses, mules and llamas. Goats cost less to buy, and the equipment used also costs less. Because goats eat less that those larger animals, they are also less expensive to raise.

The disadvantage of goats being smaller is that they can‚Äôt carry or pull as much weight as larger animals. Goats can pack about one-third of their body weight. Bucks can pull twice their body weight, while does can only pull their weight.

You also should not use pregnant does or does in milk for packing or pulling.

Read more:¬ÝCheck out these 5 ways your goats can actually earn you money.

We can‚Äôt forget that goats are adorable animals that, more than the other reasons, many people just want to keep as pets.

Teresa Cole, of Tomball, Texas, started with three does five years ago. ‚ÄúI chose to raise Pygmy goats as pets,‚Äù she says. ‚ÄúI wanted ‚Äòlivestock‚Äô that I could keep in a small pasture and take care of myself, and I wanted animals that would stay small and that I could interact with.

“Currently, I have six does and a buck. Raising goats has been more joyful than I ever imagined ‚Äî especially bouncing baby goats!¬Ý It‚Äôs amazing how each goat has their own unique personality. The most stressful time is kidding season, but having adorable baby goats climbing all over you is so rewarding!‚Äù

Pavlov concurs. ‚ÄúThey are just too darn cute and entertaining to not have. We have fallen in love with their fun personalities and, by far, they are our favorite animal on our farm.‚Äù 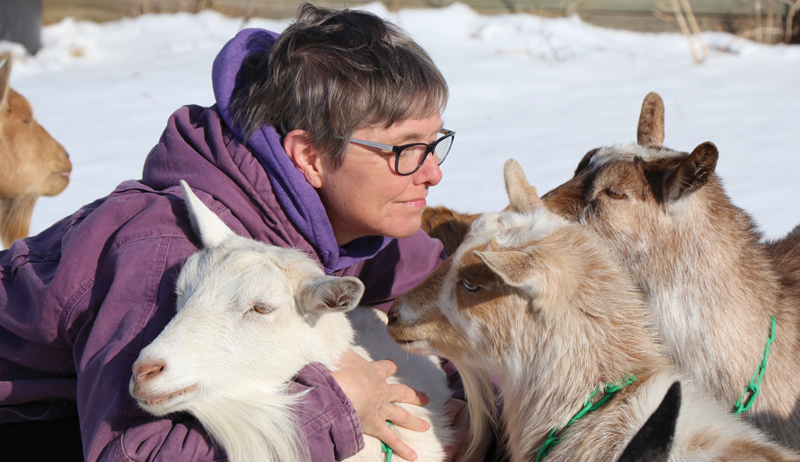 All of the Above

Although I bought my first goats because of my desire for goat cheese, I‚Äôve continued to raise goats for a multitude of reasons.

Like many owners, Victoria Rouch of Alton, Virginia, has thought about all of the possibilities and reasons why she keeps goats. ‚ÄúI have goats because I enjoy keeping an animal that is not only entertaining but diverse,‚Äù she says.

‚ÄúWhen I first considered getting goats, I was struck by the possibilities afforded by ownership. Did I want an animal for milk? For meat? Companionship? Fiber? Did I want an animal I could train to use as a pack animal on hiking trips or even train to pull a cart? With goats, you can have more than one of these choices in the same herd or sometimes multiple choices in the same animal.

‚ÄúThey are a thinking animal, and while this can be a challenge, it‚Äôs a rewarding one. Part of keeping goats is staying one step ahead of their antics, which keeps the owner sharp. Even in a herd of goats, every animal is an individual with personalities that range from businesslike to aloof to goofy to affectionate.

“They are an all-around gratifying addition to any farmstead, and I can‚Äôt imagine life without them.‚Äù