There’s No Coddling These Orchard Pests

Researchers create a lure to capture codling moths and keep them out of fruit and nut trees. 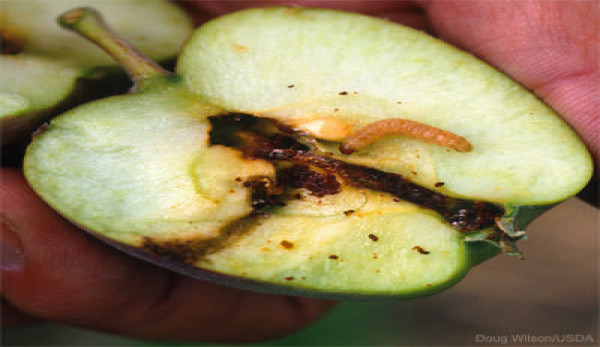 New lures that entice codling moths with the scent of food and a possible mate are helping fruit-tree growers better monitor the orchard pests and control them with carefully timed insecticide applications.

Codling moth larvae are major pests of apples, pears and walnuts. Historically, growers have sprayed their orchards with insecticide to prevent the pinkish-white, 3/4-inch-long larvae from holing up inside the fruit to feed, damaging it and ruining its marketability both in the United States and abroad.

Lures baited with synthetic versions of the adult female moth’s sex pheromone, which attracts the male insect, have helped growers refine their timing of insecticide and reduce the amount applied. As part of research to improve the technology further, a team of USDA and collaborating scientists has identified and synthesized new compounds to use with the sex pheromone. Among these are pear ester and acetic acid.

Pear ester is the characteristic aroma of ripe pears, and acetic acid is what makes vinegar tangy, notes Alan Knight, a researcher at the Yakima Agricultural Research Laboratory in Wapato, Wash., who helped investigate the attractants. Pear ester alone is a potent attractant for both sexes of codling moth. Adding acetic acid significantly increases the number of insects caught, though the team found that the most powerful lure resulted from a combination of pear ester, sex pheromone and acetic acid. The team’s studies indicated that the combined lure can capture eight to 10 times more female moths than using the pear ester-pheromone combination alone.

Using lure-based monitoring tools, the researchers developed action thresholds based on both female and total moth catches that enabled growers to reduce their pesticide applications by 30 to 70 percent. Orchard scale trials are under way to find out whether combining the pear ester-pheromone lures with acetic acid can effectively be used to monitor apple leafrollers, which are important secondary pests.

More about this research can be found in the July 2013 issue of Agricultural Research magazine.