Teri Page never intended to be an off-grid homesteader, but she and her family now live (and love) their self-sustaining Vermont life. 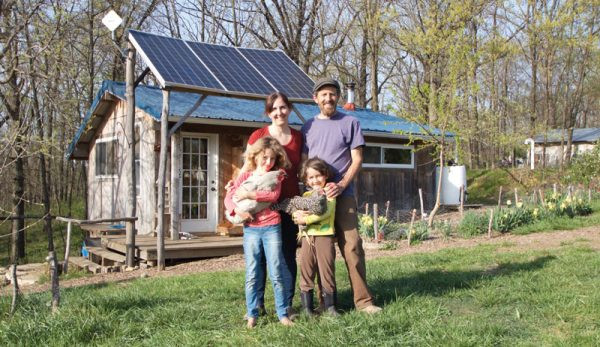 Love led Teri Page to her off-grid life. ãI wasnãt really on a track to be a homesteader at all,ã she says. ãAnd then I met my (now) husband ãÎ some of his experiences had led him to be interested in farming and homesteading, and he was going to Aprovecho, a sustainable-living skills education center in Oregon. They needed a gardener, and I wanted to live with him,ã she says.

More than two decades, two kids and three states later, Page has embraced all aspects of living off the grid.ô

In Oregon, the couple rented a cabin that, while rustic, was connected to the power grid and afforded them running water and electric power. Page, a trained marine biologist with little experience growing or raising food, fell in love with homesteading.

She established gardens filled with fresh fruits and vegetables, built a greenhouse and a livestock shed, and raised chickens, pigs and milk goats. She also learned how to preserve foods and cook from scratchãskills she never developed in her self-described ãconventional suburbanã upbringing.ô

ãI went to Aprovecho and was immersed in this whole homesteading lifestyle,ã she says. ãBy the end, I was completely hooked. It just kept going and going and going, because thatãs the thing about homesteading: Once you find one thing, it naturally leads you into the next.

“You grow a bunch of food so you have to learn how to cook it and preserve it. And then you have vegetables so it makes sense to have eggs, too. Then you ãÎ want to look at how your meat is raised and so it cascaded into this full-blown lifestyle.ã

Page began blogging about her homesteading experience at Homestead Honey, covering topics ranging from cooking in a solar oven to living without running water and composting toilets. She covered fun stuff like making beeswax candles, choosing the best apples for hard cider and foraging. She also published several books on the topic, including Creating Your Off-Grid Homestead and Building a Homestead Root Cellar.

In 2012, 13 years after moving to Oregon, the couple made the decision to take on a new project in a new place. ãIt really was sort of heartbreaking. The fruits of our labor were just starting to bear when we were leaving,ã she says. ãWe had these like huge cherry trees that were just starting to produce. We had a beautiful goat herd that weãd built up to the right size [and] a precise milking schedule. And we left all that behind in Oregon.ã

Rather than dwell on the work that went into creating her first homestead, Page focused on the new opportunities that laid ahead. ãI have a really unique capacity to continue moving forward and not dwell on the past,ã she says. ãMaybe itãs just part of like the karmic circle. Someday, I will finally get to enjoy the fruits off of my own fruit trees. But in the meantime, other people are getting to enjoy the things that Iãve planted along the way.

The couple purchased land in Missouri and built a house that wasnãt connected to the power grid. The decision to go off-grid was practical. There was electric service in the area, but accessing it on their land was expensive. Living off the grid also aligned with Pageãs values.ô

ãSolar off-grid living was something we were always interested in. It became more possible because the restrictions of that particular piece of land,ã she says. ãAnd a lot of the energy [in Missouri] is not what I would consider clean energy. So we had this opportunity to [make a financially sound] and practical decision that matched our values and how we wanted to live.

“At the end of the day, to be able to go through a storm and not lose power and have your own electricity and never have an electric billãthose are things about being off grid that I really, really love.ã 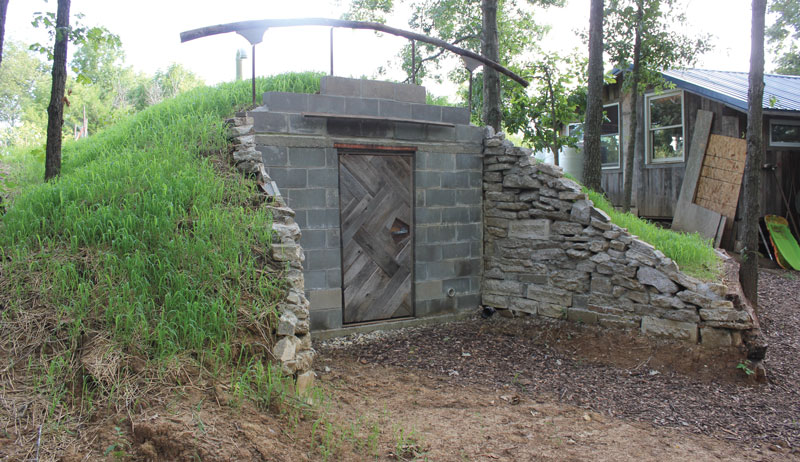 Despite honing her homesteading skills in Oregon (and being married to a carpenter), Page admits that she underestimated what it would take to start a new homestead.ô

ãWe had a distorted sense of our abilities and how long it would take to do everything,ã she says.ô

The couple lived in a tent, and later, a pop-up trailer, while building a 350-square-foot home. Page cooked in an improvised outdoor kitchen with a propane stove and solar oven; she used water from a catchment system and worked out an arrangement with a neighbor to freeze ice jugs that she put in coolers to store food because there was no refrigerator. And she juggled those tasks with homeschooling her children, reestablishing gardens, planning fruit trees and building a barn.ô

While Page knew how to garden, the conditions and climate in Missouri were much different from what she was used to in Oregon. And the learning curve made proved extra challenging.

The shorter season meant learning how to work with cold frames and adjusting planting times to accommodate different frost dates in a new growing zone. Page purchased seeds from local companies that already tested plants in the Missouri climate and asked questions of friends and neighbors.

ãLearning how to garden in a new growing zone is definitely a big endeavor,ã she says. ãYou have to ask a lot of questions and be willing to make a few mistakes and get better as you go.ã

Despite their best efforts, things didnãt always go as planned. The goats ate poisonous plants and died. Page leased an electric car but worried about the solar panels keeping the batteries charged in the winter so she shuttled back and forth to public charging stations before trading the electric car for a hybrid. And their goal of building a larger home for their growing, active family never materialized.

Read more: Curious about solar? Here are some sun-powered basics.

One of the biggest lessons Page has learned about homesteading is the importance of not thinking about off-grid living in terms of absolutes and remaining flexible and adjusting when things werenãt working. Itãs a lesson that served her well when she and Brian packed up their family and moved again, this time to Vermont in 2018.

Several factors prompted the move. Friends were leaving Missouri. Their kids were growing up and wanted to live in a less rural location to accommodate more social activities. And there was a perfect piece of land for sale in The Green Mountain State.ô

ãItãs off-grid living 2.0,ã she says. ãWeãre starting again from scratch and building and doing it all again. Weãre older and maybe a lot wiser.ã

The family is currently living in an off-grid yurt and building a home. Instead of a straw bale, cob or earth-ship home often favored for off-grid living, the couple is building a conventional stick-built home with a concrete foundation and timber framing. They’re still being thoughtful about the materials, though, sourcing lumber from local, family-owned mills and looking for opportunities to reduce waste and minimize their environmental footprint.ô

Since moving to the grid, Page has considered connecting to the grid. Most of the electricity in Vermont is generated from renewable sources, making it a more attractive decision to connect to municipal power sources. But the decision came down to the budget.

Instead of spending $20,000 to connect to the grid, Page plans to expand their current solar array and remain off the grid.

ãOff grid is such an interesting term because you could have an off-grid house that has a $50,000 photovoltaic system with wind backup. And nothing about the house would look different than a conventional house,ã she says. ãOr you could live in the middle of nowhere with a few solar panels and carry water from a creek. Thereãs such a huge spectrum of what it can look like.ã 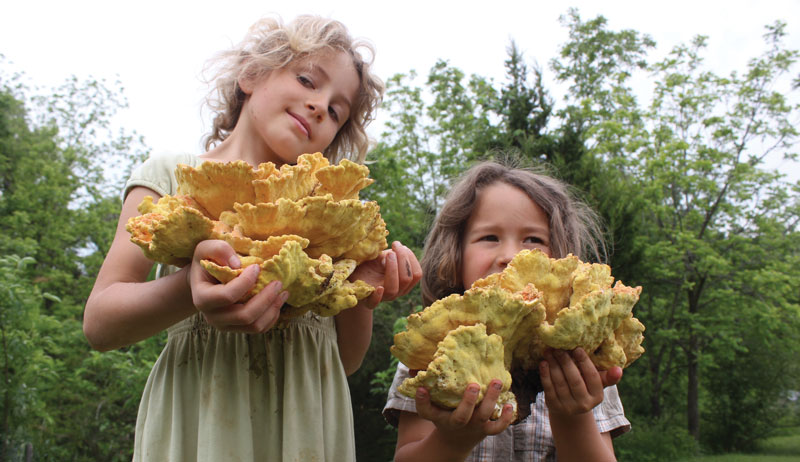 Moving to Vermont has also enabled Page to make different decisions about what she grows and raises at home. She still has a garden and raises laying hens, but she admits that itãs more convenient (and sometimes not that much more expensive) to purchase from local farmers.ô

ãIn Missouri, I actually had a lot more motivation to do some things like raise our own meat because I couldnãt get those things locally at all,ã she says. ãVermont is an agricultural state and has such a high level of quality local food that you can get virtually anything you need here.ãô

Page found farmers that specialize in certain products. Her aim: to find a balance of what she can source from local, organic farms and what she wants to grow in her own garden. She had a milking cow in Missouri but now sources raw milk from a dairy she passes on her route to work. She grows fewer carrots, turnips, beets, potatoes and other root vegetables and supplements supplies with bulk purchases from a local grower. And she sources meat chickens from a neighboring homestead.

ãIãm gardening by hand,ã she says. ãI donãt have machinery or helpers. Itãs just me and a bunch of weeds. So Iãm doing a lot of manual labor. If I had many more hours in the day and some people to help me, I would probably grow everything myself. But Iãm not there and probably wonãt ever be there, [so] Iãm definitely doing a cost-benefit analysis all the time.ãô

Just because her homestead has changed doesnãt mean that Page has lost her passion for off-grid living. ãI dream big, and I have a lot of crazy ideas,ã she says. ãI feel like having years and years of experience and a foundational and skill set has allowed us to leap into homesteading.

“This is more than just like a hobby. I mean, this is kind of the defining lifestyle…. Every part of my adult life has been living this homesteading lifestyle.ãô

This article originally appeared in the September/October 2022 issue of Hobby Farmsô magazine.