This Is Hobby Farming: 3 Partners Form an Urban Oasis in Indianapolis

Hoosiers with varied backgrounds and skills form a collective with two city farms, hoping to make a living and help the residents eat better. 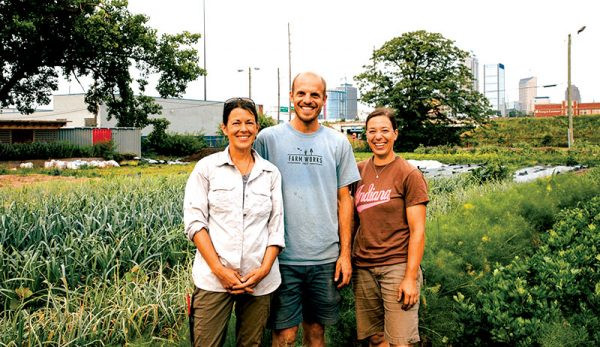 Mad Farmers Collective is an inspiration in urban farming. Bringing a formidable array of farming experience, Amy Matthews, Matthew Jose and Leslie Gottschalk (pictured above, left to right) are implementing intensive management practices in Indianapolis to produce some of the cityās best local, fresh fruits and vegetables. Tomatoes, peppers, eggplant, a wide variety of greens, root vegetables, squash, zucchini, green beans, blackberries, raspberries, strawberries and more are grown on a total of 21ā 2 acres in two locations near downtown.

Matthews, Jose and Gottschalk didnāt start out as business partners. In fact, none of them grew up on a farm. Instead, their career trajectories began with work in a variety of farming settings where they earned their chops as growers. From traveling the country and gaining experience in community-supported agriculture in Montana (Matthews) to working in Massachusetts, Oregon and New York City (Jose) to working in production roles on large northern Indiana farms (Gottschalk), the three endeavored to gain experience and build expertise.

Jose started his urban-farming venture on eight vacant lots in Indianapolis in 2009. The lots totaled a single acre and formed the basis of his early farming successes. While he was learning to grow in the city and figure out the logistics of labor capacity and market demand, Jose was also sorting out the issues of location and space. Eventually, he settled on leasing an acre of land he dubbed Big City Farms. Joseās early efforts were driven by pouring earnings back into the business. Utilizing the CSA model and selling at farmers markets and to area restaurants, Jose slowly grew his business.

In 2011, Matthews has hired by the Concord Community Development Corp. (which would close its doors in 2012) as a consultant for their urban-farm program. With Matthews guidance, the organization purchased 11ā 2 acres of land south of Indianapolisās Monument Circle, which marks the center of downtown.

Concord Community Development Corp. had a grant that provided funding for the purchase of an urban 11ā 2-acre plot and an adjacent building. It also funded significant soil remediation, fencing, a water connection, a small walk-in cooler and a seed-starting greenhouse. The grant paid for zoning and an environmental assessment. Without the undisclosed grant funding, it might have taken years for Matthewās farm, South Circle Farm, to reach its goals of organic growing.

Gottschalk, the last to come, began working as a part-time, and eventually full-time, employee for South Circle Farm. She brought with her the experiences of working on large, rural farming operations.

Working in an urban environment was a different animal; not the peaceful bucolic scenes of her former farming stops. Yet, sheās found urban farming to have its own unique characteristics. It was her experience, though, that earned her an invitation to join Matthews and Jose in a business venture they dubbed Mad Farmers Collective.

The Business of Farming

For the three partners, the business of farming is organic. The collective represents an evolution of each individual farmerās professional life to this point. While each had expertise in aspects of farming, they realized that there were also other skills needed to be successful as independent small farms.

Success isnāt just about growing; it is about the quality of the land and business skill sets, too. Accounting, construction, managing logistics of farm to market, marketing, flexibility, hard work, labor force management and problem solving are just some of what it takes.

Gottschalk added that it requires a work ethic, drive and passion in the face of mind-numbing, detail-
oriented, fast-paced and physically demanding labor. Itās hard work on many fronts and can be a challenge to not overwork or burn out.

āWe want to be sustainable as a business and for ourselves,ā Matthews says. āWe want to earn a living while offering as much fresh food as efficiently as we can.ā

They also desire to contribute to the local economy and encourage people to buy and eat more fresh vegetables while having the farms work as a business. The business model includes growing tons of good food, demonstrating sound practices and thinking about their business strategies and decisions.

For instance, all the land the collective uses is leased. There are advantages and disadvantages to leasing. Purchasing urban land is expensive, and at the beginning of their respective ventures, leasing reduced some of the risk. Neither Matthews or Jose knew if they could pull it off.

However, now that theyāve worked so hard on the land itself as well as building the business, there are risks with leasing. The land theyāve invested in isnāt securely their own. Conditions could change and the landowners could make different decisions about the use of their property. For South Circle Farm, this is a little less likely as it is still owned by a nonprofit organization. But even so, the collective is at the mercy of the landowners.

There are infrastructure risks to investing on leased land, too. āThat holds us back sometimes,ā Matthews says. Still, to meet the vision and goals of producing high-quality produce, they have invested in infrastructure. In 2016, Matthews undertook a crowdfunding venture to build unheated tunnels. Their successfully funded bid enabled the purchase and construction of three tunnels.

Since then, the trio have built two more tunnels on their own for a total of five unheated growing tunnels. These new installations meant that the farm could arrive at the first farmers markets of spring with a greater diversity of greens. They were and have stayed about two weeks ahead of schedule compared to their competitors.

Matthews, Jose and Gottschalk are committed to organic farming practices. They focus on intensive farming techniques that keep the soil in good shape while producing three to four crops from each bed. They use a no-till system; they donāt have a tractor or a rototiller, instead maintaining the soils with a nondisruptive approach. Crop rotation allows them to keep healthy and productive soils.

The intensive growing approach allows them to focus on producing organic crops that are income-generating, as well as healthy, flavorful and high-quality. At South Circle Farm, they grow tomatoes, peppers, eggplant, greens and root vegetables. They also grow squash, zucchini and beans. Because their spaces are relatively small, they grow broccolini rather than full heads of broccoli and miniature cabbage for the same space-saving reasons.

At Big City Farm, they grow potatoes and onions as well as cabbage. There is more infrastructure at South Circle including a wash station and walk-in cooler, meaning that salad greens are grown closer to the source for cleaning and cooling.

All three farmers travel between the two sites to tackle daily tasks. Their efforts are also supported by college interns, four to five volunteers who commit three to four hours a week and one part-time employee. The difficult nature of the work makes it challenging to find additional help. āWho wants a seasonal job and one that involves such hard work?ā Gottschalk asks.

Beyond the CSA Model

At first, South Circle operated as a CSA, selling shares in the produce. It gave Matthews working capital while building a customer base but became less profitable. The CSA model requires working the farm while keeping up communication with the customers and preparing and packing produce all within the small-farm scale. It also forces the farmer to grow a wider range of crops to meet the requests of CSA members. However, this much diversity proves to be less profitable.

āCustomers have more choices now, and a small farm canāt meet the demands of too many different outlets,ā Matthews says.

As this became clear, Matthews refined her strategy choosing where to put her energy in terms of growing. She chose to scale up South Circle Farm targeting farmers markets, local grocers and restaurants all with an eye to greater sustainability.

The Garfield Park market is less than a mile from South Circle Farm and helps anchor the farm in the community. Every time they go to a farmers market, they are essentially providing an education program to the community. While selling produce the collective members are teaching others about how and where the food is grown, organic gardening and more.

However, on a week-to-week basis, farmers market attendance can be unpredictable. A cold rainy Saturday morning can result in low attendance, leaving the farm stand with too much food to transport back to coolers. Hot, steamy Indiana weather can also impact attendance and buying. There are just too many ways that farmers market sales can be inconsistent.

Another part of the sustainable strategy includes selling to local chefs and markets in Indianapolis. The members of the collective work with six to eight chefs who represent about a quarter to a third of the business they do. Some chefs get deliveries twice a week, while others use the collectiveās products seven or eight times a year. āThis is a really important outlet,ā Matthews says.

Diversification includes selling to grocers as well. From the beginning, Pogueās Run Grocer was committed to South Circle because it had share values. Wildwood Grocery Market also has a commitment to small farms and has helped with the fundraising efforts of the Mad Farmers Collective. Both companies believe in small farms and love the collectiveās produce, Matthews says. These outlets work well together because they enable the Mad Farmers Collective to meet high and medium price points while scaling up its production.

Vision for the Future

Recent expansion included crowdfunding for low tunnels, which have been installed in the last year at South Circle Farm. The low tunnels allow for a longer growing ā and selling ā season. The farmers anticipate adding more low tunnels in the future

Staying focused on being a business means thinking strategically about all aspects from farming to growing practices to addressing issues such as groundhogs that are damaging to urban farm crops. As the newly reorganized Mad Farmers Collective, the three hope to follow the arch of their growth and evolution as a business moving toward even more stability. It has been a challenge to find that stability while not overworking ā something that all farmers face.

āBigger and bigger isnāt necessarily the goal,ā Matthews says. āWe would love to add more fruit in the future and are open to adding another site or farmer and are even thinking about selling plants.ā

Overall, the Mad Farmers Collective seeks to be financially sound as a business and individually. The three members have a strong desire to enhance healthy eating in Indianapolis through fresh fruits and vegetables while finding balance in their own lifestyles so that the farming isnāt all consuming.

The learning doesnāt end with creating delicious produce. Amy Matthews, Matthew Jose and Leslie Gottschalk ā aka, Mad Farmers Collective (www.southcirclefarm.com, www.bigcityfarmsindy.com) ā have been influenced by the work of other farmers and their practices. They appreciate that good farmers are taking time to write about their practices. Here are three resources that have helped them become even more efficient and vastly more productive than even a few years ago.