This Is Hobby Farming: The Poultry Farmers

These North Carolina poultry farmers have a paradise with a laying-hen pasture, two mobile coops, 700 layers and nearly 400 broilers at any given time. 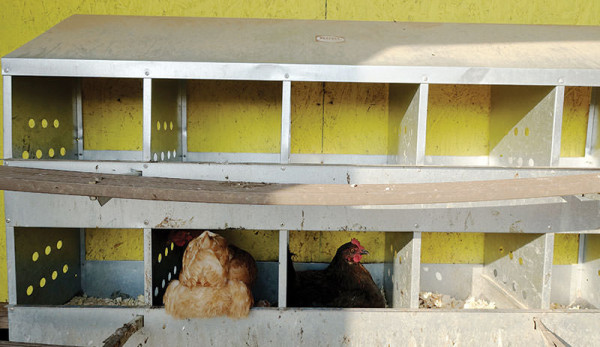 As I drove up the gravel road and peaked at the top of a ridge, the horses in the pasture on my left were bathed in my wake of dust. That day late last fall, I was visiting Dry Ridge Farm in Mars Hill, North Carolina, in the middle of what felt like a never-ôÙending drought. At that time, a state of emergency had been declared, and regular citizens and farmers alike were all feeling a tiny bit parched. I wondered how the farm was faring in the midst of these conditions.

With my 3-year-old daughter in tow, I met up with Wendy Brugh, Dry Ridgeãs co-owner and co-farmer. She was eight months pregnant and had her own young daughter, Molly Mae, toddling along. For a woman in charge of everything around meãa brand-new barn containing piglets bedded down for the winter, rolling pastures of chickens, herds of cows, a few odd sheep, a home site, several old storage structures, and the wee one at her feetãWendy was surprisingly casual and completely at ease.

She and her husband, Graham, started Dry Ridge Farm in the early weeks of 2011, a venture that concluded a whirlwind romance with the acquisition of a number of farm animals in quick succession and the beginning of the next chapter of their relationship.

Both are born and bred North Carolinians, each from families that value the outdoors and time spent in nature. The originally met in their teen years and rekindled their connection over summers spent at camps in the mountains of western North Carolina. They parted ways to attend school: Wendy at Carleton College in Northfield, Minnesota, and Graham at the University of North Carolina at Asheville.

Wendy focused on biology and environmental science and spent a year traveling to work on organic farms, while Graham studied environmental science and economics, working for several years on a small farm managing a 30-head team of hogs and a 100-head herd of cows. Meanwhile, Wendy started a small grocery store in a low-income community outside of Durham, North Carolina. Their combined educations and animal, retail and marketing experience provided the perfect foundation they would need to become responsible stewards of the land, their animals and their business.

Their paths crossed again 10 years after their first meeting. They quickly fell in love with each other, and with animal husbandry and the rural lifestyle they had begun to cultivate. The rest, as Wendy says, ãis a predictable history.ã

As we walked through the barn, the pigsã Pavlovian response was strong: They saw humans and immediately thought ãfood!ã Just like a school of fish, they moved as a swift, single entity in their enclosure, following along with me and my daughter as we passed through the barn, only the tiniest piglets trailing at the end of the group. They were cozily bedded down for the winter in the safety and comfort of an open-air barn.

We made our way out to the pasture where Graham and Wendyãs flock of 700 chickens was grazing. A big, goofy white Great Pyreneesô named HenriettaããHenã for shortãgreeted us with more enthusiasm than Wendy would have preferred. Although Hen was already on active livestock guardian duty, residing full time with the flock, she was still just a puppy excited to see people.
They had two mobile coops in their current laying hen pasture that day: one in sunny yellow and another in a cheery red. The birds were friendly and warm and didnãt mind our company one bit. We let our daughters check the nest boxes for eggs while Wendy shared more about their farmãs vision.

Within the philosophy of their environmental values, the Brughs choose to focus on raising healthy animals, preserving their speciesã genetic diversity and using them to maintain the bioôÙdiversity of their pastures and woodlands. This primarily includes raising heritage breeds and breeds that naturally pasture well and never giving them hormones, steroids or antibiotics.

Another major aspect the Dry Ridge philosophy is the importance of the Brughãs social values, which really sets it apart from large commercial meat producers and factory-farm-style management. ãOur social values differentiate us from many meat producers and include a focus on strengthening two communities that are important to us: our own human community and the animal communities that help sustain us,ã Wendy says.

For the animal communities, this means that the Brughs allow their charges to live the lives they were intended to, with the freedom, respect and proper care they deserve. For the human communities, this means carving out the equivalent of 1 percent of their sales for meat donations, either by donating the food directly or giving their customers the option to purchase a product for donation. ãItãs neighbors helping neighbors, and together, weãre building a stronger community,ã Wendy says.

While the Brughs also raise about 100 hogs per year, keep a 10-cow herd and process 10 steers per year, eggs are their largest profit generators. ãThe majority of farmers-market shoppers buying their weekãs groceries will purchase eggs weekly, which makes them a very reliable and stable source of income,ã Wendy says. Raising broilers diversifies their meat offerings at farmers markets, too. The Brughs find that carrying and selling such a wide range of meat products allows them to be a one-stop shop for their customers, because market shoppers can get beef, pork and chicken all from the same farm.

With a laying flock 700 strong, plus five rounds of 400 broilers raised per year, Dry Ridge Farm has doubled its chicken production in just a few short years. The laying hens now consist of red and black sex-link chickens, chosen for their excellent laying abilities as well as their ability to be sexed at hatching, making sure the farm is putting resources only into laying females.

ã[Sex links] are a cross between Rhode Island Red roosters and Delaware hens [for red] or Barred Rocks [for black],ã Wendy says. ãTheyãre a higher-producing bird than most true heritage breeds, while maintaining the heritage qualities of doing well on pasture and retaining their instincts.

ãWe keep our layers for two years, so we replace half the flock each year, alternating between red and black birds, so we know what to bring to the processor each year,ã Wendy says. ãOur retired layers graduate to stew-hen status, which we sell at $5 each to make our processing cost back. Very few breeds are good for both egg and meat production, but all laying hens make the best chicken soup and stock imaginable!ã

The Brughs arenãt purists about raising their own laying stock by any means, and largely, it seems, this ability to delegate and share the responsibility has had a large hand in the farmãs success.

ãWe know that breeding, incubating and hatching chicks is a completely different business from raising chicks to maturity.ã Wendy says. ãWe donãt keep roosters, and we donãt have incubators.ã The couple prefers to purchase their layers and broilers as day-old chicks rather than as pullets, which are usually 22-week-old point-of-lay females.

As for their broilers, the Brughs take a similar approach as with their layers. While broiler chickens offer consumers a fresh poultry option when theyãre shopping at Dry Ridge, the raising of these birds contributes directly back to the farm, as well. ãWeãve also used broilers to increase grass production on nutrient deficient pastures,ã Wendy says. ãIt always amazes me how much more lush the grass is that grows where the broilers have been.

ãThe broilers that we sell for meat are Freedom Rangers, but weãve also raised Red Broilers in the past,ã Wendy says. ãTheyãre slower-growing than the typical Cornish Cross that conventional growers raise. Rather than reaching market weight in five to six weeks like Cornish Cross, Freedom Rangers are ready to process in 10 to 11 weeks.

ãThe slower growth makes for a generally healthier bird that can walk around our pastures and eat bugs and grass and exercise, unlike a Cornish Cross which can become lame simply because itãs been so overbred for meat growth that its skeletal system canãt keep up with and support its own body weight,ã Wendy notes. ãA healthier bird makes for a tastier bird, so while the slower growth limits the number of chickens we can raise each year, weãre able to charge a premium for chickens that ãtaste like chicken used to taste,ã as Grahamãs grandma always says.ã

As we said our goodbyes at the houseãa beautiful new structure at the highest peak of the property, surrounded by pastureãI was once again amazed at the landscape of Dry Ridge Farm. I know there are overwhelming moments of stress and loss when it comes to owning and managing a farm, but as a visitor that day, it all felt smooth and easy. The contentment of the farmãs inhabitantsãbovine, porcine, galline, human or otherwiseãwas palpable, and that kind of feeling is contagious.

Kristina Mercedes Urquhart is the author of The Suburban Chicken: The Guide to Keeping Healthy, Thriving Chickens in Your Backyard (i5 Press, 2015) and the columnist of Chickens magazine's ãFowl Language.ã She lives with her husband, menagerie of animals, and two daughters in Asheville, N.C.