This Psychic Goat Predicts The Next U.S. President

Who will be our next President? We won't know for sure until after the polls close. 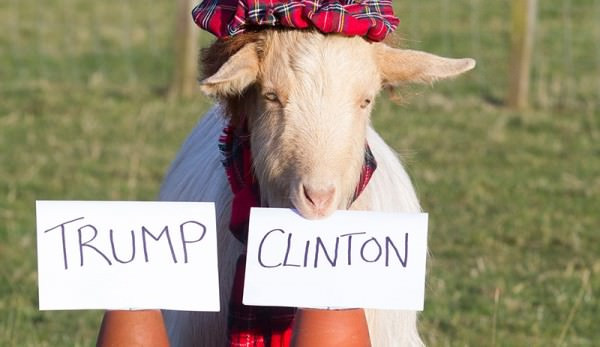 Did you getÂ your “I Voted” sticker yet? Today, Americans are heading to the polls en masse to vote in what has been a tight raceÂ for the next President of the U.S. But you don’t need to stay up to all hours of the night to wait for election results. A psychic goat in ScotlandÂ named Boots has already predicted the winner, according to Scottish newspaper The Scotsman. In a reading, the Golden Guernsey goat from a farm inÂ Roxburghshire predicted Hillary Clinton willÂ be America’s next Commander in Chief.

Now, this was all done very officially, of course. Boots was presented with two pieces of paper: one with Clinton’s name on it and one with Trump’s. When the 3-year-old psychic goat was let loose by his handler to make his choice, he chose Clinton with little hesitation. (Although, to be fair, he also gave the Trump paper a nibble.) Boots’ predictionsâ€”such as the outcome of the Brexit voteâ€”have been correct in the past, so we’ll see if this reading proves accurate. There is, after all, a monkey in China that has predicted Donald Trump as the winner, so tonight could go either way.

Moral of the story: Don’t depend on animals to call this election. Go vote!