Developed in England for racing, Thoroughbreds are still among the fasted horses bred. 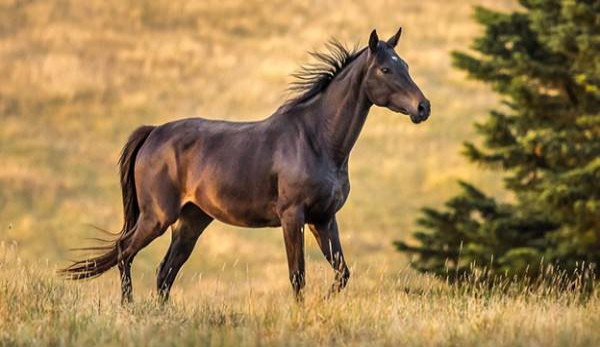 History: The Thoroughbred was developed in England in the 1700s strictly for the purpose of racing. Three stallions are credited with being the foundation of the breed: the Darley Arabian, the Godolphin Arabian and the Byerly Turk. Named after the men who owned them, these stallions were born in the Middle East and brought to England for breeding at the turn of the 17th century. They were bred with the strong native horse of England. The horse that resulted from this crossing could carry a riderâ€™s weight with speed over long distances. This quality proved popular with the British aristocracy and the newfound sport of horse racing. Selective breeding began to create the fastest horse on earth. Breeding records were not carefully kept until 1791 when James Weatherby researched and published the first volume of the General Stud Book. The book featured the pedigree of 387 mares that could be traced back to the original foundation stallions. Racing was also popular in America at this time, and Thoroughbreds had already been established in the United States at the time of the colonies. The first volume of the American Stud Book was published in 1873. The breed also played a part in the development of certain American breeds, including the Standardbred and Quarter Horse. The Jockey Club was founded in 1894 to be the principle governing body dedicated to the registry of Thoroughbred horses. Today, the Jockey Club maintains the pedigrees of all Thoroughbreds in the United States. The clubâ€™s database contains more than 1.8 million horses on a master pedigree file, including names that trace back to the late 1800’s. Approximately 37,000 Thoroughbreds are registered annually with The Jockey Club.

Conformation: The typical Thoroughbred has a straight head, high withers, and long, fine legs. Standing anywhere from 15 to 17 hands high, Thoroughbreds have a lean, lanky appearance. The colors most often seen in this breed are bay, chestnut, black, brown, and gray.

Special Considerations/Notes: Thoroughbreds are the fastest horses in the world, and can reach speeds of 40 miles per hour on the racetrack.