Bon Bon had her babies on Friday and they are triplets! 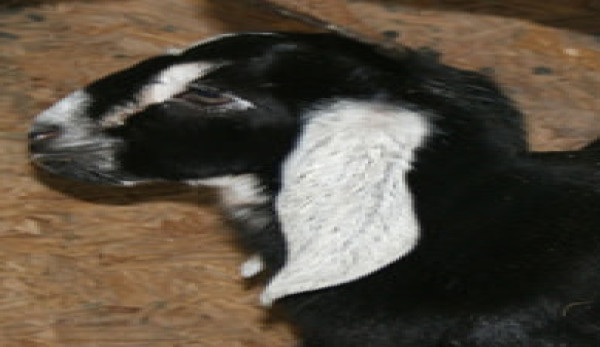 Bon Bon had her babies on Friday and they are triplets! And guess what? They have badger markings (pretty, horizontal stripes on goatsā faces; in their case white and palest tan stripes on black) but otherwise, theyāre black with white shadings just like me.

Bon Bon had my boy really fast. After stripping the goo from his nostrils, Mom placed him near Bon Bonās face so she could lick him clean (Mom helped but she used a towel; humans are funny that way).

Next she trimmed his umbilical cord to two inches long and dipped it in a shot glass of 7 percent iodine (ow!).

Then she waited. Forty minutes passed. Bon Bon finished cleaning my son; he got up and started nosing her udder. Mom smiled but she was worried, too. There wasnāt any afterbirth coming out, so Bon Bon should have been having another kid.

Mom was getting a bottle of lube from the birthing kit to check her when Bon Bonās eyes opened wide, her ears stuck out to the sides and she gave a big grunt. She began pawing the straw. Mom put the lube away. Bon Bon flopped down and began pushing hard.

Mom grabbed a towel and squatted behind her. Out plopped another baby. Mom stripped the goo from its nostrils and checked to see what it was. A girl, hurray! But just that quick, out popped another blob. Momās mouth fell open; Bon Bonās did too. Triplets? A first for our farm! And the third baby was a little girl too.

So Bon Bon had her babies exactly on time, 150 days after she was bred (she must have a calendar hidden in the dairy barn). Normal kids are nearly always born between five days before and five days after their Momās due date, though a few come even earlier and later.

Mom figures our doesā due dates using neat, free goat gestation software she downloaded for free atĀ Biology of the Goat (you can use it online too, if you like).

She also uses it to determine our sheepās due dates by subtracting three days from the date the generator indicates (the average sheep gestation lasts 147 days) and that works too.

Now Mom is waiting for lambs to be born. Wren, especially, is really, really fat! Her lambs should arrive in about 3 weeks (her due date is Dadās birthday too). In the meanwhile, Momās trying to catch up on sleep. She wants to be there for every birthing in case anything goes wrong.

Over the next two weeks Iāll tell you what Mom keeps in her lamb and kid birthing kit and how she can tell when the mamas are going to hatch. Itās female stuff but since Iām a sensitive guy, I can talk about it too.