Avoid the bites of ticks (and their nasty co-infections) by using one of these repellents free of synthetic chemicals. 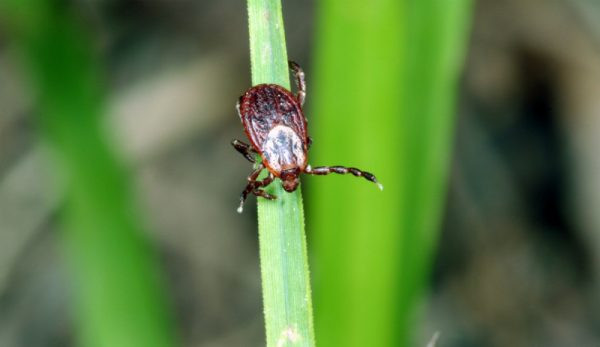 If thereâ€™s one thing I dread at the onset of summer, itâ€™s ticks. It seems like ticks arenâ€™t relegated to tall grass or the deep woods any moreâ€”Iâ€™ve seen them crawling around the lawn right outside the door of my house. With tick-borne illnesses such as Lyme disease and Rocky Mountain Spotted Fever spreading throughout the country, ticks are no joke. However, many are weary of spraying themselves and their little ones with synthetic pesticides dailyâ€”and sometimes several times a day. Here are three natural tick repellents worth trying to keep ticks and their co-infections at bay in addition to other benefits.

Many natural-minded people turn to essential oils to repel biting insects of all types, but when it comes to repelling ticks, geranium oil is a real winner. A study of 10 essential oils found in geraniums (Pelargonium graveolens) found these compounds to be nearly as effective as DEET at repelling the nymphs of the lone star tick and would repel adults, as well, though not as effectively. This particular tick is linked to Southern Tick Associated Rash Illness, also called Masters disease, which can cause symptoms including rash, fever, fatigue and muscle pain.

For a DIY tick repellent, mix a few drops of geranium essential oil in coconut oilâ€”also said to have a mild ability to repel ticksâ€”and rub it all over your skin, making sure to reach the unexposed parts your body where ticks often like to nestle. In addition to helping keep ticks from biting, the geranium essential oil also promotes healthy skin and reduces stress.

A relatively uncommon beverage in the U.S., rock rose tea, also called cistus tea, has gained notoriety among Europeans for its tick-repellent effects. In aÂ German study, dogs were given cistus capsules with noticeable effects. Rock rose (Cistus incanus) is a resinous Mediterranean plant whose leaves are used as the herb. While not much other formal research has been undertaken on cistus tea as an insect repellent, many anecdotal accounts regarding its effectiveness make drinking the tea on a regular basisâ€”at least during tick seasonâ€”seem worth a try.

Other research points to rock rose as a great source for antioxidants and an important herb in treating viral infections, biofilm buildup and cancer. It also is present in severalÂ protocols for treating Lyme disease, the tick-borne illness transmitted by the blacklegged (or deer) tick. The tea is pretty astringent, much like black tea, and while itâ€™s not particularly offensive, some people don’t like this quality. If you feel that way, you can try making or buying a tincture of the herb instead.

This final tick repellent is an old, albeit stinky, standby: sulfur. Some recommendations include ingesting a little bit of sulfur at the beginning of tick season, while others recommend dusting your outdoor clothes with itâ€”the generational trick is to fill a sock with sulfur dust and dab it on your boots and pants. In addition to preventing tick bites, sulfur also protects against chiggers, another summertime nemesis. Although you might end up smelling like rotten eggs at the end of the day, it could be a desirable alternative to spraying DEET or permethrin for those who are worried about potential side effects related to synthetic chemicals. It is important to note that sulfur is an antibiotic and overuse internally could trigger yeast infections in women.

When it comes to tick season, you have to be smart. If you know you will be in risky tick areas, wearing light colored clothing, long pants, tall socks and boots can go a long way toward keeping ticks from biting, and doing thorough checks of your skin after being outdoors can help prevent biting ticks from becoming engorged. In addition, put one or more of these natural tick repellents to work, and you can keep yourself relatively safe without the use of synthetic chemicals.