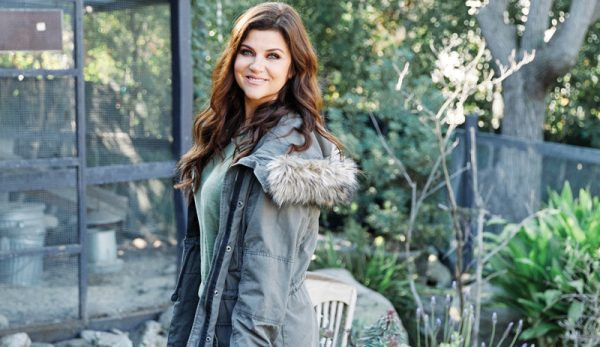 â€śDuring this time of being forced to slow down, homesteading can really feed so many parts of yourselfâ€”not just your belly,â€ť says Tiffani Thiessen, who you might know more intimately as Kelly Kapowski, from the television show Saved by the Bell.

The teen sitcom, about a group of friends at Bayside High School, originally aired on NBC for four seasons from 1989 to 1993. A revived version of the show recently premiered on NBC’s Peacock streaming platform, with Thiessen reprising her role.

In addition to being in front of the camera, Thiessen now enjoys being in front of her garden and kitchen. She grows vegetables, preserves fruit, cooks family meals and keeps chickens in the backyard of her Los Angeles home, which she shares with her husband, actor/artist Brady Smith, and two children, Harper (10) and Holt (5).

Her inspiration to try back-to-basic living came from recalling her pre-acting days, as a regular kid growing up in Long Beach, California.

â€śEverything seemed simpler then, right?â€ť she says. This simplicity is something she is trying to impart to her own children. â€śHaving a child see where food comes from has given my kids an excitement for what they eat. [And] we really make use of all we grow, which is why we grow it!â€ť

Being able to grow part of your own food can be comforting in these current turbulent times, which arenâ€™t as simple as her childhood. But some things are the same, such as the people around you.

â€śItâ€™s about having faith and really keeping your core strong, which for me is my family,â€ť she says.

To slow down and savor their time together, Thiessen and her family hike, color, read, complete puzzles and play outside. Last year, she and Smith published a young childrenâ€™s book, Youâ€™re Missing It! Itâ€™s a cautionary tale of what happens when you are glued to your smartphone.

Smith, whose paintings have been exhibited in galleries in Los Angeles, New York City and Houston, illustrated and co-wrote the book.

During Thiessenâ€™s Southern California childhood prior to the original Saved by the Bell, her family had a handful of backyard chickens.

â€śWe always had pets growing up,â€ť she says. â€śMy dad worked for the city and would always find stray dogs and cats and bring them home. [He] had the biggest heart and truly taught my brothers and me how to love and respect animals.

â€śMy husband and I both reminisced about having chickens growing up and decided to give it a try ourselves.â€ť A few years back, they added a small flock. It came with the standard adversities such as losing birds to egg binding, predation by a coyote and a hawk, and a hen named Anna turning out to be a rooster named Andrew.

They currently have seven hens:

Thiessen is in control of what food scraps they get from the kitchen. Smith mostly oversees the daily chicken husbandry.

â€śMy husband read probably four chicken books and combed the web for coop designs,â€ť she says. â€śHe eventually drew up some plans, and then we hired our very talented friend whoâ€™s a carpenter to build it.

â€śWhat I love most [about keeping chickens] is what it teaches our children the responsibility of owning animals,â€ť she says, â€śand the respect we need to have for all living creatures.â€ť

On the nearly one-acre plot, the family grows grapefruit, oranges, lemons and limes. They also have plum, peach and avocado trees and two varieties of apple trees.

They experience the usual trials such as dealing with squirrels grabbing the fruit and some insect damage. But the benefits far outweigh the challenges.

â€śMy fatherâ€™s a retired landscape architect, so he truly taught me the basics at a very young age,â€ť Thiessen says. â€śI then wanted to continue that knowledge myself, so I would read about it as well.â€ť

In addition to fruit trees, Thiessen grows several types of lettuces as well as most vegetables in three large garden beds. They also grow many herbs, one of which embellishes her Meyer Lemon and Thyme Whiskey Sours.

â€śOnce you have had one, you canâ€™t stop!â€ť Thiessen says.

For her children, she makes homegrown, homemade chamomile and mint teas. â€śBoth my kids love tea,â€ť she says. â€śAs for me, I am obsessed with kombucha. And ginger is a top favorite add-on for me for both kombucha and tea.

â€śThere are definitely some foods my kids donâ€™t love. But itâ€™s all about balance, I tell them. Eat the stuff that truly feeds your body well â€¦ then you can have a little of the fun stuff. Balance!â€ť

Out of the family of four, Thiessen spends the most time in the garden, with her kids a close second. They start some crops from seeds and many as plugs, and have composted for nearly two years.

â€śItâ€™s all about the soil,â€ť she says. â€śI have seen huge differences in how my garden has benefited from making my own dirt. We are building a new, tall raised-bed to be able to separate all my growing vines in one special place. I think they will be very happy in their new home.â€ť

Read more: Ready to start building your own soil? Here’s how to get started with composting!

For those city slickers who want to grow their own food, Thiessen advises to start small with something that you can easily manage. Then, go from there.

Some of the food never makes it to the kitchen as itâ€™s snacked on simultaneously as itâ€™s harvested. She and the kids turn huge yields into jams, jellies, pickles or preserves.

Many of the recipesâ€”125 to be exactâ€”can be found in her cookbook, Pull Up A Chair, and she also posts weekly recipes on her website, TiffaniThiessen.com.

â€ś[Cooking] is a love that I have had since I was a child,â€ť she says. â€śMany of my biggest memories are of me and the women in my family all cooking together in the kitchen. Itâ€™s now something I enjoy doing so much with my own children.â€ť

â€śGardening teaches so many things if you think about it,â€ť Thiessen says. â€śIt teaches nurturing, growth and where things come from. Itâ€™s endless on what it can do for kids.

“And just being outside and getting dirty is huge for the body and mind.â€ť

Thiessen learned to relocate her vegetable beds to the current location from a shadier spot and consulted with the Gardenerd team on new fruit trees for the property as well as a new compost bin setup.

“[Thiessen and her family] have been great advocates of growing their own food and composting the food waste into fertilizer for the garden,â€ť Wilhelmi says.

Kenny Coogan, CPBT-KA, has a Bachelor of Science in animal behavior and is a certified bird trainer. He is a pet and garden columnist and the author of the childrenâ€™s book A Tenrec Named Trey (2013).