At Tillers International, learning from our past provides critical skills for the future. 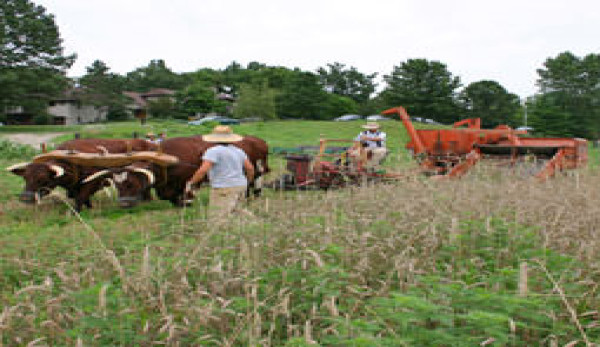 The genesis for Tillers International, a nonprofit organization dedicated to āpreserving, studying, and exchanging low-capital technologies that increase the sustainability and productivity of people in rural communities,ā occurred back in 1969 when Dick Roosenberg served as a Peace Corp volunteer.

Raised on a Michigan dairy farm, Roosenberg went to Dahomey, in west Africa (the current-day Republic of Benin) to help farmers of the newly independent country as they tried to rebuild after centuries of French colonialism and economic and social unrest. His charge was to introduce the use of oxen as a tool for increasing food self-sufficiency.

āThere had not been oxen in the north of the country because of sleeping sickness in cattle, but new veterinary medicines made it possible to keep cattle. I was just so impressed by the responsiveness of these farmers to the oxen. They picked up on using them right away,ā Roosenberg says.

Out of Africa
By the end of his three-year commitment to the Peace Corps, Roosenberg was hooked: āOxen could triple the food production of subsistence farmers. Thatās big; it can make the world a more peaceful place.ā

Though he had grown up on a dairy farm and worked with cattle all his life, he hadnāt gone to Africa with the skills of a droverāsomeone who moves livestock over long distances.

Roosenberg explains, āWhen we were over there, we knew that our great grandparents had used voice commands to control draft animals, but we were learning as we went. There were some French volunteers nearby whoād had some experience droving in France, so they taught us some things, but we learned a lot just by working with the animals.ā

During his tenure, he, and the dozens of farmers heād worked with while in Africa, developed the necessary skills to make the most out of ox power, but Roosenberg knew that his learn-as-you-teach approach to droving reduced the effectiveness of his years on the ground with the poor people of Africa.

If only heād had those skills before going, he could have accomplished so much more. So, upon his return home to Michigan, he kindled a dream: He wanted to start a training center where aid workers, like heād been as a young man, could come for training in animal-powered agriculture before going out into the worldās most impoverished countries.

Dreams donāt always pay the bills, so Roosenberg returned to school and earned a law degree. He worked as a lawyer, yet the vision of a training center was always somewhere in the back of his mind.

On a Sunday afternoon in 1980, the idea picked up steam: āI went to the Henry Ford Museum,ā he recalls. āI watched these old men working their draft horses, and I thought, āWe really do need a bridge to tap into the historic reserve of knowledge that still exists in this country, before it disappears forever.āā

About the Author: Carol Ekarius is an HF contributing editor and author of many agricultural books, including Small-Scale Livestock Farming (Storey Publishing, 1999) and Hobby Farm: Living Your Rural Dream for Pleasure and Profit (Bowtie Press, 2005).Ā