As feral pigs scavenge for food between New Year’s and spring, farmers can act to control these animals on their property. 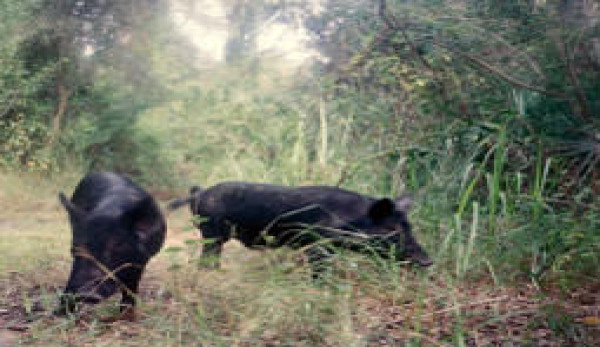 From now until spring is one of the best times of the year to control wild pigs, according to the Texas AgriLife Extension Service. One factor is that hungry wild pigs are on the move and more likely to be out in the open to forage for food this time of year, says Billy Higginbotham, fisheries and wildlife specialist at the Overton AgriLife Extension.

Wild pigs, aka feral hogs, browse woodlands, graze pastures and uproot planted crops for food. They also scavenge and raid deer-feeder sites. From the beginning of the year through spring, many of these food sources are not as readily available.

“Native foods, such as acorns, disappear as winter wears on, and many deer hunters do not continue to supplement their deer population after hunting season,” Higginbotham says. “As a result, the wild pigs will be increasingly on the move and more susceptible to baiting as they search for food.”

Another reason to step up control efforts of wild pigs this time of year has to do with the animals’ breeding behavior.

“Wild pigs are one of the most prolific large mammals in the world,” Higginbotham says.

The average age of a sow having her first litter is about 13 months, according to the Texas A&M AgriLife Extension website. Mature sows will have an average of 1.5 litters per year, and the average litter size is 5.6 piglets.

“Though sows can have litters any month of the year, there always seems to be a peak in farrowing during the early spring,” Higginbotham says. “This is an added incentive for landowners to strike as soon as possible before even more pigs hit the ground.”

“A 2011 survey of 700 landowners in 139 Texas counties by AgriLife Extension detailed the frequency of control method utilized,” Higginbotham says. “Of 36,664 wild pigs removed in 2010 by survey respondents, 57 percent were removed through trapping and 24 percent via aerial and landowner shooting. Hunting was responsible for removing another 11 percent of the pigs taken. Catch dogs removed 6 percent of the total while 2 percent were removed through the use of snares.”

Although design is important, there’s more to successfully controlling hogs than just buying or building a good trap, he says.

He notes that the most difficult pig to trap is one that has been “almost” caught, but got away because of poor trap design or planning. Mature pigs, especially boars, also learn to be wary of traps when they see other members of their sounder are caught. So it’s important to catch as many as possible with one setting of the trap.

He also recommends using a remote-sensing camera, available from sporting-good retailers, to determine the size and feeding habits of pigs before constructing the trap. The cameras are designed to operate automatically at suspected pig haunts. They’re tripped by motion detectors with pig activity and take digital photos, marking the time in the process.

“Landowners remain the first line of defense because Texas is 95-percent privately owned land,” Higginbotham says. “We are not going to eradicate wild pig populations with the current legal control methods, but research has clearly demonstrated that the economic impact wild pigs have on agricultural operations can be significantly reduced by the control methods we do have.”