Is a Tiny House Right for Your Farm?

The tiny house movement is gaining popularity throughout the United States. Here are five reasons a tiny home might make sense for your hobby farm. 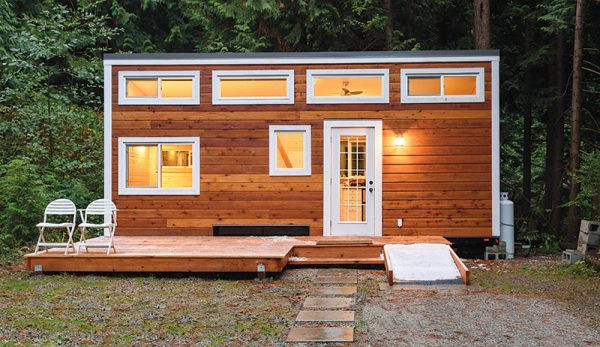 In Laura Ingalls Wilder‚Äôs classic On the Banks of Plum Creek, the pioneering Ingalls family struggled to farm on the prairie while living in what could essentially be described as a very rustic tiny house. Literally dug into the side of a hill, this small dwelling featured such amenities as a dirt floor, hay ceiling and grass roof‚Äîyet the Ingalls seemed happy enough with their home, as it provided all that they needed despite its small size.

Today, we have plenty of better building materials available besides dirt and grass, but people still discover that a comfortable home doesn‚Äôt necessarily mean vast square footage. In fact, the tiny house movement has gained a lot of interest all across the country for a number of reasons. But before we examine the concept further, let‚Äôs define some things.

Other tiny houses are more robust, with full kitchens, full bathrooms, multiple sleeping areas and comfortable living rooms‚Äîall snugly contained in a less-than-500-square-foot area. Besides the lower costs of smaller dwellings, many people see tiny living as one component of an overall lifestyle that minimizes their impact on the environment.

A great thing about ‚Äúgoing tiny‚Äù on a farm is that you might already have a building or two that can be remodeled or revised into a place suitable for tiny living. Perhaps you have an older log cabin on the property‚Äîloved but unused for decades‚Äîthat is waiting for the right person to restore it to its former glory.

Maybe you enjoy thinking differently and have your eyes on a former outbuilding‚Äîa small barn or a large shed‚Äîthat could be gutted to the studs, cleaned and then repurposed into a tiny dwelling.

Maybe your farm features a small stone building that could be transformed into an amazing living space. If you‚Äôre handy and not afraid of a little demo and reconstruction work, repurposing could be an option.

2. You Have Land Where You Can Locate It

If you don‚Äôt have a suitable building already on your property, you do have something else: land. Many people want to go tiny, but soon discover that building or buying the house itself is only half the task: You also need somewhere to build‚Äîor park‚Äîit. But when you own farmland, you already have a suitable location; in fact, you might have multiple locations and will need to choose: Should the tiny house overlook that rural road or that barn or that rolling vista?

3. You Have Off-Grid Potential

Once you‚Äôve decided to go tiny, you‚Äôre only a small step away from going off grid as well. Here‚Äôs why: Generally speaking, the resource requirements for a tiny house are considerably less than those of a more traditional size home. With fewer rooms‚Äîand fewer occupants‚Äîthere are naturally fewer lights, appliances, computers, devices and other electricity-hogging gadgets running at any time, meaning the electrical needs of a tiny house might be very small indeed. Likewise, a small but well-insulated and weather-sealed tiny house should be quite energy-efficient in terms of temperature control needs.

Electric heat and air-conditioning is probably out of the question for an off-the-grid home, no matter how tiny (electric heat and air-conditioning units are notorious power-hogs), but propane is a popular heating and cooking alternative. It‚Äôs usually cost-effective, easy to use, easy to purchase, easy to store and can even be used to power a propane refrigerator‚Äîtaking additional strain off of the electrical system of your tiny house.

Wood is another heating option. Again, because of the small size of a tiny house interior, it can be relatively inexpensive to heat this way. Farm owners have a possible advantage here as well: If you have wooded areas on your rural property, you might be able to harvest enough wood to fuel your tiny home‚Äôs heating system for the whole year. Sure, it‚Äôs a lot of work, but the lack of heating bills during the winter might make the process worthwhile.

For electricity generation, many off-grid tiny-house enthusiasts use solar panels. While the initial setup might be expensive, solar panels are fairly low-maintenance other than keeping the batteries serviced. Wind power works in some locations but requires a large tower for the windmill‚Äînot exactly what most people have in mind when they envision going tiny.

4. You Can Make It Portable

When someone says ‚Äútiny house,‚Äù they might mean a tiny house on wheels. There are a few advantages to this style: For one, it‚Äôs portable. Depending on the configuration of the plumbing and electrical hookups, some tiny houses on wheels can almost function like a fifth-wheel trailer, capable of fairly easy travel and possibly able to use infrastructure established for RVs at campgrounds. (Check ahead to be sure tiny houses are welcome.)

Secondly, a tiny house on wheels doesn‚Äôt require any foundation or site work; it‚Äôs ready to park, so you might be able to minimize costs. Have a vacant field handy? You have a potential tiny house parking space.

Portability also means you can move the tiny house if you‚Äôd like to experiment with different spots on the farm. You could even move it around for fun‚Äîperhaps a new location each year.

That said, wheeled houses are not without their drawbacks. Besides the obvious difficulty of downsizing your possessions to fit, there are a additional concerns. Some of these are:

Designing a tiny house for road travel puts significant restrictions on the potential shape of the home. While specifics vary from state to state, in most cases a tiny house on wheels can‚Äôt be wider than 8 1/2 feet, longer than 40 feet or taller than 13 1/2 feet to be road legal and able to tow without a permit.

From a design standpoint, the 8-foot-width constriction requires creativity to work around. A long, thin home isn‚Äôt what most of us are accustomed to habitating or decorating, but there are plenty of ideas out there to help make the most of the space. Often a small loft is used as the sleeping area, although the 13-foot height limit means the space must be low, and you probably won‚Äôt be able to sit up in bed. Beyond the loft, there is usually enough space for a small kitchenette, a tiny bathroom and one all-purpose living/sitting/working area.

Even though the maximum towable size might seem ample at first, not all tiny house owners want to tow such as large load or feel comfortable driving down the highway with such a big trailer behind them.

Obviously, the smaller the wheeled tiny house, the easier it is to tow, and smaller tiny houses might ride easier on the highway, too. If the tiny house is unlikely to move often during its life, then a large size might be OK. But if you plan to take the tiny house on occasional road trips, think twice before going too big.

5. Room for Guests or a Getaway

Even if your rural property already has a traditionally sized home on the premise, there are several reasons why you might want to consider adding a tiny house to the picture. Tiny homes make fantastic guest retreats. It gives guests their own space for the duration of a visit and is less disrupting to your own main house. Tiny houses also make wonderful offices or retreats for artists and writers. A tiny house office with a rural view might be just right for you.

Making additional side farm income from renting land or cabins on your property is not a new idea; dude ranches have done it for more than 100 years. Farm vacations offer a similar retreat for urban residents seeking a break from the city, and this can be an appealing source of secondary farm income.

If you‚Äôre interested in going this route, a single‚Äîor a few‚Äîtiny houses on your farm might be just the option you‚Äôre seeking. Your guests can enjoy the distinct and fun aspects of tiny living for a short time, and you won‚Äôt have to commit to the investment of typical resort/dude ranch housing.

You‚Äôre probably familiar with the iconic and mobile teepees made famous by Native Americans. A similar‚Äîthough somewhat more robust‚Äîdwelling was used by nomadic people of central Asia going back to ancient times, and these portable homes are known as yurts.

Today, yurts maintain the same basic design as they have in the past‚Äîa self-supporting latticework frame in a circular footprint with a tentlike covering on the sides and roof‚Äîbut they also might have modern innovations added to make them more permanent. Far more than simple ‚Äúround tents,‚Äù many modern yurts are built on a wooden deck foundation and might incorporate such enhancements as clear dome skylights, full kitchen and bathroom plumbing, electricity, air-conditioning and heat, and other accommodations. If you want to go tiny in a distinct place with a nod to an ancient style of construction, a yurt might be right for you. Unlike ancient yurts, which were intended as temporary housing for nomadic families, many modern yurts are built with permanency in mind.