A Few Tips For Determining If Your Pig Is Pregnant

The question of a sow's breeding status is common among keepers of hogs, but there are a few ways to determine if your pig is pregnant. 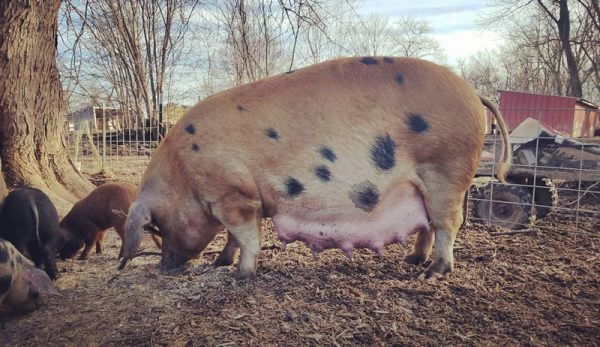 How long have the thoughts of mankind been taxed by this query? How many hours have been logged crawling around to observe the business end of a female pig? What number of unsolicited pig part pictures have been texted to those with a more experienced eye?

If social media educational groups are any indication, this odd behavior pattern appears to be the fate of every farmer who thinks it is a good idea to add a hog farrowing enterprise to their farm.

Three months, three weeks, three days. The short gestation and prolific nature of the swine means that, relatively, we donâ€™t have to wait too long to find out.

The maximum amount of torture you will endure is 114 days. In the meantime, here are a few basics to help you, impatient human, in your journey.

Developing and minding a farrowing calendar helps you plan for piglets.

The trickiest part is establishing a starting point for the 21-day count, or the estrus cycle of your lady.

Pigs cycle every 18-21 days. The span of symptoms is wide, ranging from none at all, to fully aggressive, restless, swollen mamas, mounting pen mates with visible discharge, ears popping up and down, vocalizing and locking their back legs to brace for the boar’s heavy frame.

My favorite sow used to walk to the edge of her paddock closest to our house and stare, unmoving, for hours. She was a great no-brainer sow for a beginning farmer. Some are less obvious, but most gals show at least a few of these signs.

The most reliable indicator is the attention of the boar. However, keep in mind, you do not have to witness a boar mount a sow or gilt for her to get pregnant.

Weâ€™ve had seemingly discrete boars that prefer to breed when no one is watching, and weâ€™ve had boars with less scruples, willing to mate only on full agriculture educational display, as a bus full of school children drives by.

But sneaky or not, the boar always leaves evidence of mating. Heâ€™ll leave sticky evidence all over the sowâ€™s body, particularly her rear end, all over the pasture, maybe even all over a bale of hay, itâ€™s just … youâ€™ll see it.

Iâ€™m sorry. I wish this was a classier resource, but here we are.

Once you can establish mating has occurred, itâ€™s time to start the 21-day clock looking for another heat cycle. Prepare to endure all sorts of â€śwhat ifsâ€ť and self doubt.

No is the only definitive answer. If she cycles again, she is not in the family way. If thereâ€™s no evidence of heat, youâ€™re partially on your way to answering yes, my pig is pregnant.

Unless sheâ€™s only a little bit pregnant.

There are many roadblocks to certainty on the farm. Disease pressure, stress, weather changes, transportation stress, age and condition of the sowâ€”a number of things can cause a gilt or sow to absorb an early pregnancy. Itâ€™s rare, but it happens.

To complicate matters further, aggressive boars will, in fact, mount a sow who is already pregnant. Itâ€™s a good sign if she refuses to put up with his tomfoolery, but it depends on the temperament of both the boar and the sow.

I have seen very pregnant sows put up with this behavior. Become familiar with her behavior and signs of heat.

Follow these strategies when planning and planting pastures for pigs.

When we first started out, we were tempted by expensive cheats like pig pregnancy test strips (yes, they exist) and portable ultrasound instruments, which emit a series of tones that indicate pregnancy between 30-80 days after mating.

Ultimately, collecting pig urine or convincing sows to hold still for the dopplerâ€”as well as learning proper technique for these devicesâ€”were not practical at our scale. I could definitely see myself diagnosing a full bladder as a false positive.

We put off buying equipment until, one day, we found we had trained our eyes to recognize a pregnant pig.

Milkline, underline, rail, milk railâ€”there are many terms for it, but mammary development is the most reliable and consistent indicator of swine pregnancy.

Udders along the belly will fill out slowly from the rear like a balloon animal prior to being twisted. Teats will expand or cone out toward the ground.

It takes several hours of pig boob observation to make the call, but as a general rule, gilts show change earlier than our sows. The professional eye can detect change about 30 days out.

In an older sow, our warning window is shortened to about 2-3 weeks. Eventually, the udders will become so engorged that youâ€™ll be able to squeeze the teat and express milk, a sure indicator of Go Time. Pack your hospital bag, as youâ€™ll likely have piglets within 24-48 hours.

Fair warning, we have had high production sows express milk for a full week before farrowing. Just to keep us from getting too confident.

As the mother pigâ€™s belly swells and is weighed down with the pregnancy, in some pigs, the vulva will actually begin to point up toward the sky. The key here is knowing what the sowâ€™s vulva looks like when not bred, and observing any change.

This appears to be a genetic trait, as this method has proven less reliable on our farm. But many have found success in observing change of direction in lady pig parts, if thatâ€™s your thing.

Waiting for babies is a major cause of anxiety for new farmers.

Farmers want to be prepared for a new litter of piglets. At the same time, they also seek assurance they are not carrying costs for livestock with reproductive issues.

Luckily with pigs, thereâ€™s usually only a month or two (at most) of wondering in despair if your pig is pregnant. Just hang on a few more weeks.