Snow fences can be put to good use on farms. The key is to install them correctly, so you don’t wind up creating worse drifts than you had before. 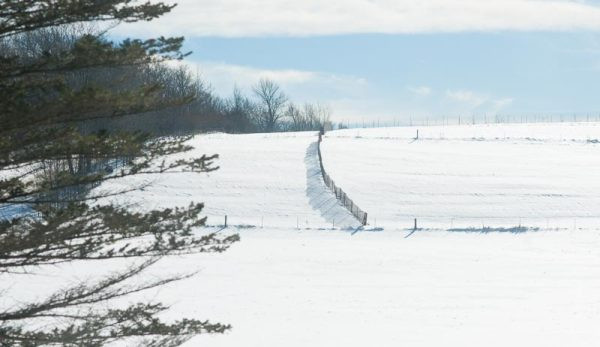 Here in northern Wisconsin, snow fences are a common sight along roadways. The idea is to create windbreaks that prevent snow from drifting severely where maintenance crews will have to clear it away to keep traffic moving.

But snow fences can also be put to good use on farms, whether you’re trying to keep your driveway clear or guard a livestock pasture from unnecessarily deep drifts. The key is to install snow fences correctly, so you don’t wind up creating worse drifts than you had before.

These four tips can help you build the most effective snow fence for your farm.

Carefully consider the height and placement of the fence.

The most important element of installing an effective snow fence is making sure the height and placement are correct. It might seem logical to install the fence right up alongside the area you want to protect.

But this is a poor strategy. A snow fence only controls drifts. It doesn’t eliminate them.

A snow fence can deposit drifts on its leeward side across an area 35 times longer than its height. So if you want to protect your driveway with a 4-foot fence, you’ll want to install it 140 feet upwind of the driveway.

Prevailing winds in the U.S. generally blow from west to east. The windward side will be to the west of the area you wish to protect.

Read more: Snow blower or plow—which is better for your farm?

The fence itself should be porous, not solid.

A snow fence is supposed to act as a windbreak, not a wind stopper. The idea is for the wind to be slowed by going through and around the fence, not stopped in its tracks. A solid snow fence is less likely to survive the buffeting it receives from winter winds.

Instead, a snow fence should be porous, with perhaps 50 percent of its surface area open so the wind can pass through.

Snow fences made of plastic mesh are widely available. Rolls of wooden slats held together by wire, however, are also available and a common sight in my area.

Use sturdy materials and deep posts.

Since a snow fence is meant to stand up in the face of heavy winter winds, it needs to be sturdy enough to withstand harsh conditions.

Posts should be set so at least 1/3 of their length is below ground, or even 1/2 to be on the safe side. For example, a 6-foot T-post can be installed with 2 feet below the ground to create a 4-foot fence with 1/3 of the post height below ground.

The spacing of the posts is also an important consideration. Eight feet between posts is considered the maximum suitable for a snow fence. The fencing material itself should be attached securely to the posts.

Means will vary depending on the materials you use. But don’t skimp in this department.

Consider attaching the fencing materials to the windward sides of the posts, so the wind will push the fence against the posts rather than away from the posts. This can lessen the strain on the attachment points.

Read more: T-posts can serve many purposes around the farm. Here are a few suggestions.

Leave a gap between the ground and the bottom of the fence.

In order for the snow fence to function correctly, it’s important to leave a gap between the ground and the bottom of the fence. This helps keep the fence from getting buried by snow. The gap should measure at least 5 inches, if not more.

One useful rule of thumb is to make the make the gap 10 percent as tall as the fence. If the fence is 5 feet (60 inches) tall, the gap should measure 6 inches.

By following these tips, you’ll be well on your way to constructing a suitable snow fence for your farm. Good luck!