You might think laying out raised garden beds is a straightforward task. It is, as long as you put some time into getting all the measurements correct. 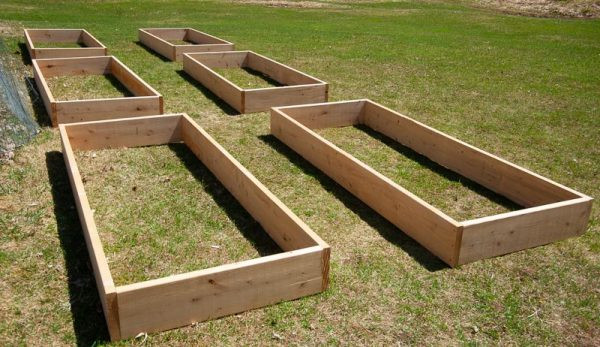 You might think laying out raised garden beds is a straightforward task. Isnâ€™t it just a matter of measuring out the sizes, squaring the corners, and going from there?

Well, yes â€¦ and no. You want to arrange the beds in a logical manner that wonâ€™t challenge your productivity (and patience) for years to come. So you really need to put some time and thought into the measuring step.

After all, once raised garden beds are prepared, theyâ€™re not easy to move. Itâ€™s better to get them right the first time around and avoid regretting their layout at a later date. Keep the following considerations foremost in your mind when laying out raised garden beds.

Read more: These pointers will help you plan your raised beds once they’re installed.

What Dimensions Will Be Best for Each Bed?

In theory, a raised garden bed can be any size large enough to support the plant(s) you aim to grow. But some sizes are more suitable than others.

The width is the most important consideration. Three to 4 feet wide is considered optimal for the short side. Any wider, and youâ€™ll find it difficult to reach the middle of the bed without climbing inside and compacting the soil.

And if any of your raised garden beds will be installed along a fence or building, you might want to make the width even more narrow. That way you can easily reach across the whole bed from the one accessible side.

You can also factor in required spacing of plants you intend to grow.

Say youâ€™re growing pumpkins on raised mounds spaced 8 feet apart. A bed measuring 8 feet long wonâ€™t provide enough space for more than one mound. But you might be able to squeeze two mounds into a 12-foot bed, if you donâ€™t mind some vines creeping over the edges of the bed.

How Far Apart Should the Beds Be Spaced?

The amount of space between each bed is just as important to consider. An 18-inch walkway between each bed might seem like plenty when youâ€™re laying out empty beds. But plants have a habit of encroaching on these narrow walkways until theyâ€™re impassible.

For example, I once planted tomatoes in adjacent beds separated by 18 inches or so. The tomatoes grew so vigorously that by the end of summer, the two beds had practically become one. It was hard to tell where one tomato plant ended and another began!

The path between the beds was nothing more than a hazy memory, If it had ever existed at all (maybe it was just a myth?), it was long gone by the peak of tomato season.

Read more: Do you compost? You shouldâ€”here’s why and how to start.

Will You Use Machinery?

You should also consider whether youâ€™ll need to bring machinery between the raised garden beds.

A walk-behind string trimmer mower is convenient for keeping the pathways between beds tidy. But it canâ€™t serve its purpose if there isnâ€™t enough room between beds to maneuver around.

Similarly, if you want to drive a garden tractor and wagon through your garden with loads of compost, youâ€™ll need much wider spacing between at least some of the beds.

If youâ€™re not concerned about tractors and want your beds spaced closer together, thatâ€™s fine too. But in this case, I do recommend that you install the beds one at a time.

Start at the back so you can pull trailer loads of compost right up alongside each bed, filling as you go. Then slowly work your way outward until all the beds are in place. That way, you wonâ€™t have to haul compost by the shovelful or wheelbarrow load, past dozens of beds, to fill the most inaccessible beds in the back.

Laying out garden beds for maximum satisfaction and productivity takes a bit of time and planning. But the troubles youâ€™ll avoid in the long run make it all worthwhile.