Tips For Providing Your Goats The Shelter They Need

You don't need to break the bank with shelter for your goats, but minding some key considerations will keep your animals happy and healthy. 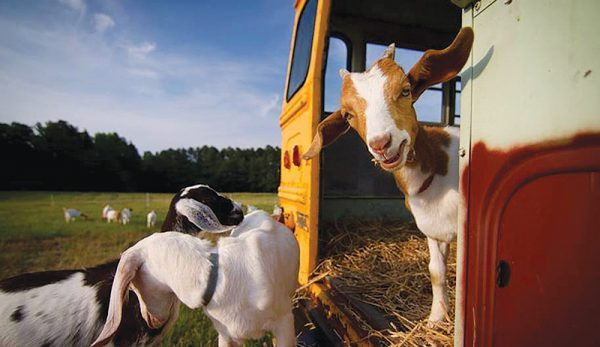 When Kathryn Spann started raising dairy goats in 2008, she thought wooden sheds built on skids would be the ideal housing for her herd. The shelters could be attached to a tractor and moved, ensuring the herd had a safe space to escape the elements and allowing Spann to practice pasture rotation without building individual shelters in each pasture.

The shelters worked when the herd was small. But as the goat population grew, SpannÔÇöwho raises 90-plus dairy goats (including Alpine, LaMancha and Nubian crosses) with her husband, Dave, on Prodigal Farm in Rougemont, North CarolinaÔÇöneeded to search for a different option.

ÔÇťWe practice pasture rotation, and we wanted shelters that could move pretty easily,ÔÇŁ Spann says. ÔÇťWe couldnÔÇÖt make the shelters bigger because it would tear up the fields if we moved them.ÔÇŁ

While there is no one-size-fits-all goat shelterÔÇöoptions range from doghouses and hoop houses to three-sided run-ins and barnsÔÇöan ideal shelter has several important elements, including protection from drafts and exposure to elements like wind, rain and sun. The addition of running water, while not necessary, can make it easier to refill buckets, and electricity allows you to run clippers and disbudding irons and add heat lamps for newborn kids.

To decide on the right goat shelter for your farm, think about your setup:

Farms in northern climates need shelters that can withstand snow and ice (and possible flooding when it melts). A southern-facing shelter provides the best protection against wind.

The breed matters, too. Dairy goats have a lower body condition score than meat goats, because all of their energy goes into making milk, according to Morgan Watts, livestock extension agent with North Carolina State Extension. Meanwhile, meat goats build muscle, making them less susceptible to the elements and more apt to thrive with minimal shelter.

Your shelter doesnÔÇÖt need to be a contender for design awards, but it does need to be available to the goats from the moment you bring them home.

ÔÇťIf you try to build a shed while the new goat is tied to the apple tree, youÔÇÖre bound to have trouble,ÔÇŁ says Jerry Belanger, homesteader and author of StoreyÔÇÖs Guide to Raising Dairy Goats.

Read more: These goat health basics will help you keep your goats kicking.

When the goats of Prodigal Farm outgrew the movable wooden sheds, Spann purchased several old school buses to serve as goat shelters. The buses were inexpensive and, with the seats removed, provided adequate protection from the sun and rain.

Windows could be closed for warmth in the winter and opened in the summer for cross-ventilation. And the buses could also be driven between pastures without putting too much pressure on the ground.

The goats loved them, and that proved to be a problem.

ÔÇťThe kids liked the ramps leading in and out of the bus for play. But they were so curious and were out there, under the buses, pulling wires and hoses,ÔÇŁ she says. ÔÇťThe goats ended up tearing out so much of the mechanical equipment that we were towing them between pastures.ÔÇŁ

The goats of Prodigal Farm will soon have a new place to call home. Spann is in the process of building a 32-by-120-foot barn that, with a fabric roof and metal trusses, will house the goats all winter. The wooded areas around the perimeter of the pasture will provide protection from the elements in the summer.

Goats are curious creatures, which makes smart construction essential. Belanger suggests steering clear of plywood, plastic and unprotected insulation. Instead, opt for dirt, concrete, sand or gravel floorsÔÇöbut not wood, which will soak up urine and prove impossible to clean.

Ventilation is also essential. Without adequate airflow, Watts notes that ammonia can build up and cause respiratory issues.

Shelters should also be located on the farmÔÇÖs high points to avoid pooled water when it rains. Permanent shelters, including barns, must be accessible during all kinds of weather for hauling grain and hay.

Most hobby farmers also want the shelter (and the goats) close enough to the house for added convenience.

If youÔÇÖre bringing home goats for the first time, Belanger believes a smaller shelter is better, adding, ÔÇťStart small, preferably with an already existing barn or shed of some kind. Gain some experience with the routine of running a home dairy, paying attention to workflow and efficiency. Then construct more permanent housing based on those experiences and observations.ÔÇŁ

Starting small is a good idea, but avoid overcrowding. In open housing, North Carolina State Extension recommends that shelters have rear eave heights of 4 to 6 feet and front eave heights of 6 to 8 feet. Each goat should have between 8 and 10 square feet of floor space.

Belanger recommends 12 to 25 square feet per animal, which means a herd of 10 goats would need a shelter measuring between 120 and 250 square feet.

That range in shelter size recommendations reflects differences in climate.

ÔÇťGoats will spend more time inside during a northern winter than in a milder location,ÔÇŁ Belanger says. ÔÇťDitto for a rainy area versus a drier one. If a sizable yard or pasture is available, the goats will spend less time in the barn or shed and wonÔÇÖt require as much inside room.ÔÇŁ

Certifications such as Animal Welfare Approved might also factor into the size of the shelter. AWA rules stipulate that dairy goats weighing up to 44 pounds have at least 4 square feet of space, while those weighing more than 176 pounds need at least 16 square feet of space. Spann follows AWA recommendations for the goats of Prodigal Farm.

With too little space, Watts worries smaller goats might be left vulnerable to the elements, explaining, ÔÇťSome herds will have dominant goats that will push the smaller ones out if there is not sufficient room.ÔÇŁ

A shorter shelter might also make it easier for goats to jump on the roof, which can cause damage and increase the risk of injured goats. Spann also fears that smaller shelters could speed the spread of parasites.

ÔÇťWe had more mite outbreaks when the goats were all snuggled up together on the bus,ÔÇŁ she says. ÔÇťIt was a vector for parasite transmission.ÔÇŁ

Smaller shelters, such as doghouses or run-ins with low ceilings, might also be harder to clean. Manure will pile up faster, requiring more frequent cleanings.

Spann used to park a tractor at the back door of the bus and shovel the bedding and manure straight into the bucket for disposal.

A clean shelter helps protect goats from diseases and is considered an essential element of biosecurity. The USDA Animal and Plant Health Inspection Service recommends cleaning and disinfecting housing on a regular basis, including removing manure and other contaminated materials such as soiled bedding.

Belanger believes that one of the biggest mistakes new goat owners make is not preparing for the arrival of kids. ÔÇťGoats are like potato chips,ÔÇŁ he says. ÔÇťYou canÔÇÖt have just one. Even if you donÔÇÖt intend to keep [the kids], the herd has a way of growing.ÔÇŁ

Pregnant does and newborn kids have specific shelter needs. YouÔÇÖll need enough space to provide a clean, secluded pen that provides extra protection from the elements, including a secure outlet for a heating lamp.

Kids are especially vulnerable to cold, wet weather. Without adequate shelter, they could get respiratory infections and hypothermia. In extreme cases, exposure to the elements can cause death.

Watts suggests allocating at least 20 square feet for a ÔÇťjugÔÇŁ where does can be separated from the herd for three to five days after kidding. The private space allows does to bond with their kids and provides enough space for farmers to assist with deliveries, if needed.

Read more: This guide to goat pregnancy makes having kids a lot easier!

The ideal shelter will do more than house your herd. Most shelters also act as storage buildings for hay, grain, equipment and supplies, which need to be in a spot that is inaccessible to curious goats. Goats will need access to feeders, free-choice minerals and water in their shelter, and space should be allocated to provide easy access to the entire herd. You may also want to outfit a shelter with extras such as a milking station.

ÔÇťPoultry can be messy in goat quarters, especially when they get into the feed, and chicks get trampled,ÔÇŁ he says. ÔÇťSheep and goats can get along, but when they donÔÇÖt, their completely different methods of fighting put goats at a disadvantage.

You donÔÇÖt need to break the bank when providing shelter for your goats, and aesthetic considerations are between you and your personal preferences. But following a few simple guidelines to meet your goatsÔÇÖ needs will keep you and your animals healthy and happy.

Sidebar: Before You Bring ‘Em Home

Bringing home goats is exciting and stressful. And the discovery that all of the local farm-supply stores are closed after realizing you forgot an important supply for your new goats will only add to the madness. A little advance preparation can help ensure a smooth transition to life on the farm.

In the workshops Kathryn Spann teaches on her Prodigal Farm, she suggests stocking up on everything you need to bring home a new goat.

If youÔÇÖre bringing home a kid that has not been weaned, youÔÇÖll need some additional supplies: