Meet Tito, a Duck Who Dresses as Fictional Characters

We talk with Tito's owner, Gustavo Esparza, about his Indian Runner duck who wows crowds at comic conventions with his cosplay. 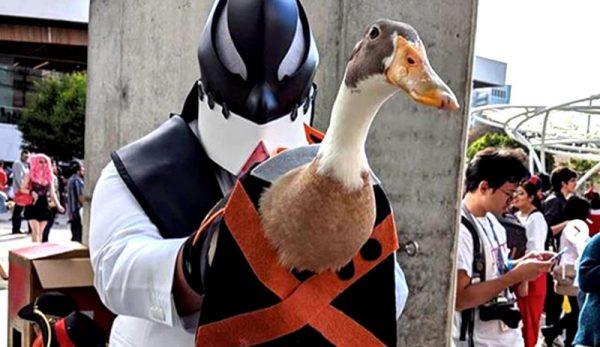 We poultry lovers are known to do a lot of unusual things with our feathered friends. We buy them avian diapers and watch TV with them. We purchase hen harnesses and take them for walks. We train them to sit on our handlebars and go for bike rides with them. And now, we can add cosplayâ€”the act of dressing as a fictional characterâ€”to the list of bird-buddy activities. Meet Tito.

Tito recently attended the Comic-Con International: San Diego, the largest comic-book convention in the world. Held every July at the San Diego Convention Center, this event draws more than 160,000 attendees from around the globe, many of them engaging in cosplay as a favorite comic-book, cartoon, anime, manga, TV-show, film or book character. Tito, an Indian Runner duck, has thrilled crowds with his cosplay, including Batman (or, well, Batduck), Katsuki Bakugo (shown below) from My Hero Academia (a Japanese superhero manga series), Harry Potter (or at least a member of Gryffindor House) and Usagi Tsukino, a fictional superhero otherwise known as Sailor Moon.

His owner, Gustavo Esparza, explains that cosplay is pretty much second nature for Tito now.

“We have been dressing up Tito since he was a baby. I have been attending cons for a few years now and thought it would be fun for him to participate,” Esparza says. “My sister’s friend decided to make him his first cosplay, Donald Duck. His first convention was Fanime in San Jose, California, and the results were very positive.”

The 3-year-old drake, who calls San Jose home, has since expanded his participation to include that city’s Crunchy Roll Expo, Los Angeles’ Anime Expo and the San Diego Comic-Con. The internet sensation travels around the convention venues in his custom wagon. Tito has some 25,000 followers on social media including Instagram, Twitter and Facebook. Esparza says he aims for Tito’s new YouTube account to soon have scripted videos featuring the feathered fan favorite.

Tito came into Esparza’s life through work. Esparza is a kindergarten teacher, and baby Tito was a classroom pet, helping his students learn about plants and animals. Tito happily lives with Esparza in his own enclosure, complete with two pools and a companion duck, Frida, whom Esparza rescued as a baby. Like any 3 year old, Tito has his quirks. He doesn’t like fruits or vegetables, is a very picky eater and has shown little interest in the toys Esparza has bought him.

“If anyone out there has any suggestions for duck toys, please let me know!” Esparza says.

Tito has had a huge impact on Esparza’s life: “I meet a lot more people, and I am more social because of the events we attend. â€¦ It’s fun to get out of the house.”

Comic and anime conventions are where Tito shines at his brightest.

“When people see him, they say very funny things out of shock, like ‘Is that a real duck?’ or ‘Is that a wild duck?’ while Tito is wearing a full cosplay and shoes,” Esparza says.

“Our hope right now is to actually enter convention centers with Tito,” Esparza says, explaining that most convention halls do not allow animals inside. Tito and Esparza thus typically interact with fans outside. He adds that going inside “would be so much fun!”