We talk to Melanie MacInnes from Locality Brewing, a British Columbia-based farm brewery, about hand-scything, antique threshers and their super-local process. 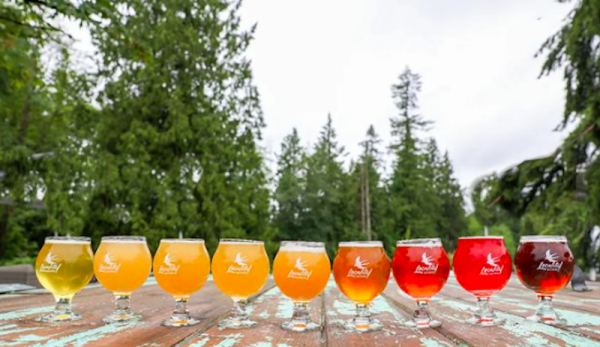 “We were in our 30s and traveling around and started seeing these great farm-to-table experiences in different places,” says Melanie MacInnes when she looks back on the formation of Locality Brewing, a venture she launched alongside her husband, Andrew, in Fort Langley, British Columbia.

“It was giving more opportunities for families to sit and interact with farms and have nice food and beers,” continues MacInnes. “We thought that was really neat and not something that was really being done in British Columbia with beer. So it was kind of a pipe dream idea.”

Since bringing Locality Brewing to fruition a year ago, the brewhouse has built up a reputation for crafting sterling small-batch beers that are frequently based around the farm-sourced combination of barley, hops and honey.

Flush from celebrating the brewery’s first year anniversary, we spoke to MacInnes about the early roots of the venture and the seamless match between bees and brews. We also got the scoop on borrowing antique equipment from farming museums.

After deciding to experiment with the idea of crafting beer, MacInnes and her husband began by planting an acre of barley.

“We’re in British Columbia, so let’s see if we can even grow it,” she recalls. “We also planted 6 acres of hazelnut trees and started beekeeping with an overall permaculture farm-style goal. We also planted some hops to see how they’d all grow and what works and what doesn’t at first.”

After that initial 1 acre of barley grew, MacInnes and her husband were faced with the problem of harvesting it all.

“We went to the British Columbia farm museum and asked, and they had these old 1890s wooden metal scythes!” she says. “We hand scythed the acre of barley. Then the next step was to thresh themâ€”and again the farming museum had a 1930s threshing machine.”

MacInnes says that integrating the local community into the farm is a key part of their operation. Early hop harvest events reflected this ideal.

“We’d have hop harvests where the community would come and pick the hops and have some beer,” she recalls. “It was just such a lovely setup. So the next logical step would be to start an actual brewery.”

The Launch of Locality Brewing

Spotlighting a brew that encapsulates the brewery’s field-to-glass commitment, MacInnes holds up the honey lager.

“Nothing travels off the farm!”

Connecting Beer to the Land

When asked about the biggest reward that comes with running a farm brewery, MacInnes laughs and says, “You get to drink the beer, which helps with the farming!”

After a pause she adds, “It’s all about the customer interaction. My goal is always to connect people to the ingredients of the food and the drink that they’re having. It’s going back to that idea of families hanging out in an open space and being around grass and trees.”